by CCME Content Team
Share on FacebookShare on Twitter
The Eurovent Middle East 5 Years Anniversary Congress, in Dubai, becomes an occasion for collective expression of determination to iron out tough creases on the building industry landscape. Surendar Balakrishnan, Editor, Climate Control Middle East, has the story...

Khaled Klaly, Montreal Protocol Regional coordinator, West Asia, could not have been blunter when he said the world is still heading for a temperature rise in excess of 3 degrees C this century, far beyond the Paris Agreement goals of well below 2 degrees C. It didn’t stop there – he spoke of how Nationally Determined Contributions (NDCs), in the context of the Paris Agreement, are still woefully adequate, and of how the level of global ambitions, in relation to the Paris Agreement, must be three times what it is for a 2 degrees C pathway and five time what it is for a 1.5 degree C pathway. 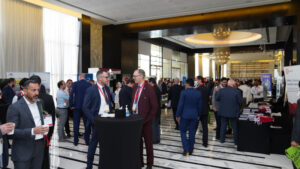 Khaled Klaly was speaking on September 13 at the Eurovent Middle East 5 Years Anniversary Congress, an event that saw speakers and delegates from Middle Eastern and international government agencies, multilateral implementation bodies and private-sector firms. The event was also the occasion for the signing of a Memorandum of Understanding (MoU) between Eurovent and the GCC Standardization Organization (GSO) to foster cooperation between the two organisations – an imperative need, amongst other measures, if Klaly’s stark statements were anything to go by.

Klaly pointed out to other shortfalls, including how the number of countries committing to a net-zero regime is not enough and how, given the fact that the equivalent of Paris is being added in floor space every five days, the world would be able to meet its sustainable building targets only if it urgently and decisively adopts net-zero measures. He said that considering that cooling is the fastest growing use of energy in buildings and that it continues to drive peak electricity demand, especially in hot countries, the world is left with no choice but to invest in more efficient air conditioning systems to cut emission of greenhouse gases. In that context, he added, the role of RAC associations, which promote the use of climate-friendly air conditioning systems, is a vital one, indeed.

Markus Lattner, Managing Director, Eurovent Middle East, speaking later in the day, touched on the role of RAC associations whilst speaking broadly on energy efficiency in the Middle East. Lattner highlighted the technological progress in the industry, in the forms of variable-frequency drives and VRFs, amongst others. He also spoke of the firmer entrenchment of cooling based on seasonal demand, and of BMSes and smart controls, which allow cooling at almost half the energy cost than before. He pointed to the arrival of better technology for free cooling to meet the specific needs of the IT industry and the reality of CO2 systems being feasible for supermarket refrigeration in hot and humid climates. Lattner noted with satisfaction that regulatory frameworks are adjusting to market and environmental needs, highlighting SEER regulation, MEPS and the upcoming regulation in ventilation segment. And yet, he spoke of the long and arduous road ahead that needs to be traversed.

Speaking from an energy efficiency point of view, he said the problem has to do with consumers not buying the most efficient air conditioning systems. The price paradox – CAPEX vs OPEX – exists, he said. From a total cost of ownership (TCO) point of view, though, he added, it is important to understand that “cheap is always more expensive”. The world is still beset with challenges, he said. The world needs to provide answers for how to improve design by 40%, installation by 15%, operation by +20% and maintenance by 25%. One possible answer, he said, would be to invest in education and training. That is why, he said, Eurovent Middle East is taking the initiative of setting up the HVACR Leadership Academy, expected to become functional in the next half year.

Speaking from an Indoor Air Quality (IAQ) perspective, Lattner said it is important to establish a mandatory building inspection system. He added that Eurovent would offer a Position Paper on the subject, which would seek to answer questions relating to proper maintenance of HVACR systems, ensuring fresh air supply, the regular replacement of air filters, the refrigerants coursing through the air conditioning systems and the bacterial sampling of air ducts. He said it is important to conduct a proper assessment of maintenance and operation guidelines and of documentation procedures. All these, he added, are indispensable to providing better IAQ to the population, reducing respiratory illnesses, and easing allergies and other serious diseases.

Speaking on a broader range of solutions, Lattner spoke on regulatory development and improvements, building codes and the need to mandate qualification for certain critical operations relating to building performance. Perhaps the icing on the cake would be to establish an HVAC Ministry, he said. “We have Ministry of Health, Public Works and Infrastructure, which are all related,” he said. “But we need a more central organisation, so that we are working on a higher governmental level.” 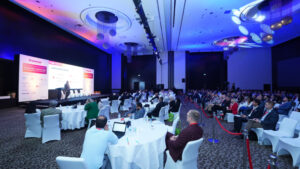 Lattner also called for greater regional cooperation, considering that countries in the Middle East face similar conditions, which demands greater collaboration. Specifically, he pointed to the need for harmonisation of standards. “Eurovent Middle East has been founded to foster collaboration and cooperation, so work with us, so that no cooled air is lost,” he said.

Speaking prior to Lattner, Tariq Al Ghussein, President, Eurovent Middle East, had, as well, spoken on the need to curb power consumption through properly operating air conditioning systems. “Today, we can cool, ventilate or refrigerate any space,” he had said. “Lowering the impact that cooling has on warming the world is an important role. How can we flatten the curve on energy demand?” A pertinent question that many sought to answer during the event through different expressions.

One of the highlights of the event – and one that could hold the answer for greater collaboration, as desired by Lattner, and for flattening the curve, as raised by Al Ghussein – was the signing of the MoU between Eurovent and the GCC Standardization Organization (GSO). Eurovent characterised the signing as heralding a partnership between the two organisations, expected to bring closer cooperation on standardisation and capacity building and to facilitate exchange of expertise between the two organisations. H.E. Saud Al-Khusaibi, President, GSO, and Raul Corredera Haener, President, Eurovent, the signatories of the MoU, spoke extensively on the implications of the document for the region. Al-Khusaibi said: “There is an increasing recognition of the important role of the private sector in enhancing the standardisation activities contributing to economic growth and protecting the consumer, environment and public health. On the other hand, GSO has a central place in supporting efforts in fostering a regulatory environment that enables the private sector to flourish and fulfil its role as the main engine of growth.” Haener said: “The formalisation of our long-standing cooperation by this Memorandum of Understanding is the best evidence of our commitment to the Middle East. For more than five years, our chapter, Eurovent Middle East has been taking up the role of a stakeholder for the industry in the region, and with this MoU we now ensure that the combined expertise of the European industry is at disposal to the GSO.”

H.E. Al-Khusaibi used the occasion the event provided to elaborate on the work GSO is engaged in. He spoke of how GSO, in 2021, approved the Stakeholder Engagement Guide, to encourage participation in standards and to ensure fruitful contribution. “GSO has prepared necessary infrastructure and policies, and from this perspective, GSO organises annual meetings to open discussion platform between regulators and economic participants, leading to establishing good regulation practices, which can only support GSO initiatives of integration and establish GCC common market, he said. “GSO, since its establishment in 2001, has helped the GCC region countries to achieve the objectives set for in the charter and GCC economic agreement by standardising activities and compliance with standard bodies in GCC region member states.”

Haener, speaking on stage after H.E. Al Khusaibi, and giving a Eurovent perspective, highlighted the increasing importance of ventilation and IAQ in the context of the COVID-19 pandemic. He said that energy efficiency and sustainable products have never been more important. “Energy use is more relevant than ever,” he said. “HVACR plays an essential role in tackling tomorrow’s challenges. We as an industry also require support for the widespread application of technology for supporting IAQ and energy efficiency.”

Dr Iyad Al-Attar, independent air filtration expert, spoke at length on IAQ. Presenting a granular scientific view of the health-related challenges confronting humanity, Dr Al-Attar said IAQ has been overlooked, ignored and misunderstood. Zeroing in on his area of speciality, he said filtration is the common denominator for any indoor space humanity find itself in, be it an airport, kindergarten or shopping mall.

Dr Al-Attar spoke of how, for many years, air filtration has been demanding a seat on the HVAC table and yet has been denied the attention. In FM meetings, for instance, the priorities for discussion include energy, thermal comfort and cutting costs, he said wistfully.

He said the underlying reason for many respiratory-tract diseases is humanity’s tendency to excessively pollute the atmosphere. Pointing to how air pollution can mess with the DNA in humans, he said: “The more we pollute, the more we have to filter. With six stages of air filtration, who will listen, so let’s reduce pollution.”

That said, he highlighted how air filtration is an indispensable aspect in efforts taken to improve human health. That’s why the old school of FM of keeping things afloat deserve to be questioned, he said. Pointing to the malaise gripping building industry stakeholders, he said: “We have obstructed air quality enhancements, we have thwarted air filter upgrades, and we have embraced the theology of washable filters.”

He said it is high time building industry stakeholders agree to a regimen that includes quantifying pollutants, specifying filter requirements, employing appropriate filtration and seeking professional advice from filtration experts. “Let’s reimagine air quality,” he said. “We need to reject all maintenance tricks and short cuts.” All regional governments, he said, should facilitate proper maintenance, based on quantifying, reporting, regulating and rewarding.