What is the market size of District Cooling in the GCC region?

The population is increasing, and power is increasing per capita. The GCC region is becoming a substantial player in terms of capacity.

What progress has the District Cooling market made in the GCC region in terms of penetration?

Penetration of District Cooling in the GCC region probably did increase marginally in the last seven years, though we have seen an increase in capacity. In 2008, the rate of penetration was 3.3%. In 2012, it was 5.1%, and in 2021, it was seven per cent. So, it is moving up but has not reached a substantial penetration rate, or anywhere near its full potential, which in my opinion is 60-80%.

The biggest benefit of District Cooling is its ability to store thermal energy in an effective manner. Energy storage in the GCC region and the rest of the world is a growing challenge with the continuous increase of intermittent renewable energy, where fluctuation in the load is to be absorbed by thermal energy storage, helping to stabilise the electric grid. 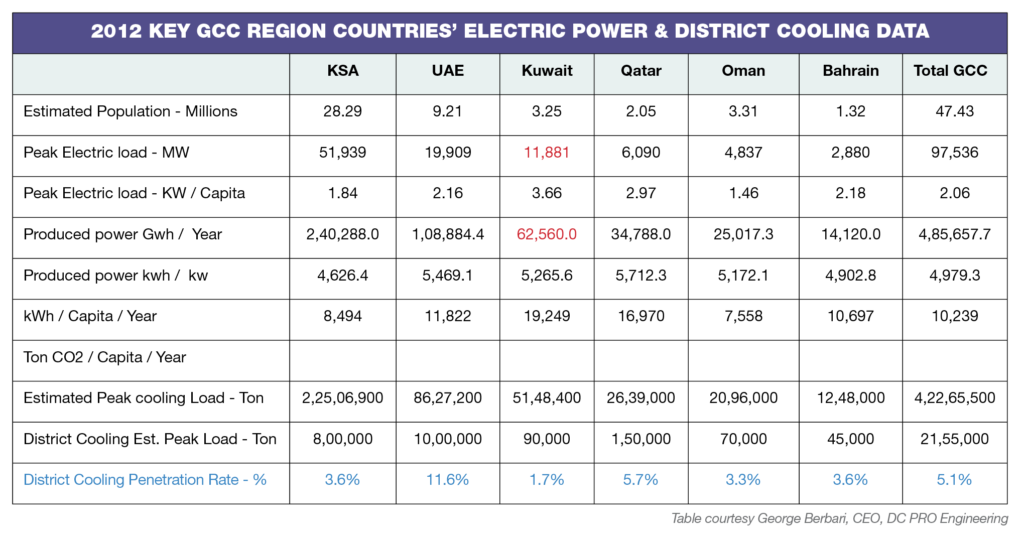 The governments here know the challenges are rising. Renewable energy is yet a small portion of the energy mix in the GCC region, but it is increasing. If by 2050, we will exceed 50% of our energy use as renewable energy in the overall mix, then we must be ready for that and rely on several energy storage approaches, such as grid-scale batteries, reverse water pumping and, above all, thermal energy storage.

If the GCC region countries increase District Cooling penetration to 50%, only then will they benefit from thermal energy storage. And additionally, they would need to change the design of thermal energy storage to integrate it with renewable energy. The Excel sheet I am sharing is one of the best stories on District Cooling. The numbers tell a significant story. In 2012, the population in the GCC region was 47.43 million; in 2021, it rose to 60.40 million. Peak electric load in 2012 was 97,536 MW; in 2021, it was 144,098 MW – you are talking of a 47.7% increase, while the population went up only by 27.4%. The peak electric load per capita has risen from 2.06 kW in 2012 to 2.39 kW in 2021, so the consumption per capita is increasing.

How much is Dubai on track to improve penetration of District Cooling and get a bigger share?

Dubai can increase penetration from 21% to 60% without adding a single chiller. The emirate just needs to expand its chilled water networks and install thermal energy storage capacity. They are still designating certain areas that must be served by District Cooling.

I believe Dubai can do much more to help District Cooling. You can increase penetration to 60%, and the cost of increasing the penetration is a fraction of what it has possibly paid till now. 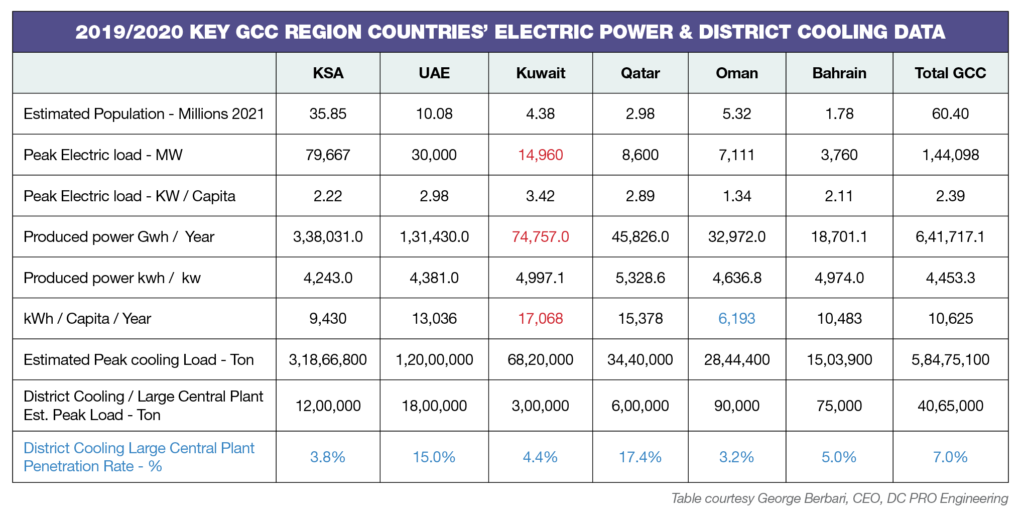 Are District Cooling utilities offering greater benefits to customers than before?

In some areas, yes… they are more friendly to customers. In terms of Low Delta T Syndrome, they are trying to explain to customers and give them a grace period. Also, some of them want to reduce the connected load and are instead levying a one-time charge. They are also trying to help in reducing energy.

Are we starting to see the benefits of RSB Dubai’s (Regulatory Supervisory Bureau) new regulations?

We recently heard the good news that the DED (Dubai Economic Department) is trying to make real estate more competitive, and one question that shot up was District Cooling charges.

What is the progress with the consolidation of District Cooling entities in the region? You had earlier written on consolidation. Are we beginning to see the benefits of consolidation?

In my view, when a transformed entity emerges because of the consolidation, it wants to recover its investment; and so, there is more pressure on pricing. Indeed, this seems to be putting pressure on District Cooling companies to increase rates rather than decrease them, because they are buying at a premium. There are instances where they are buying at 2-3 times the book value. So, in my view, consolidation seems to be counterproductive as of now.

You have always spoken of the need for more innovation in District Cooling? Are we seeing an improvement?

One aspect that is affecting District Cooling across the board is the lack of enough instances of integrating automation. All the companies working in automation are suffering – owing to regional and global cyclical and geopolitical trends – and are not able to financially sustain themselves, and I believe the region is perhaps losing its expertise because of that. The automation companies should have been busy improving plants with AI, but unfortunately, they don’t have sufficient business to sustain themselves. Broadly speaking, all contracting works in the GCC region are becoming highly competitive, and contractors and engineering consultants are suffering.

There was a time when you had 100s of electro-mechanical contractors, but now very few are surviving. Very few are financially and technically healthy. And from a District Cooling perspective, there are no more than five or six contractors that are still standing; among them, not all are financially healthy. So, if you don’t have engineering, the fees are dropping, and you see consultants are working in other countries. In short, you don’t see automation integrators being able to survive here. After the acquisitions, one way to improve profit is to reduce costs, but copper and steel prices have gone up, so there is more pressure on contractors to reduce costs. So, we need a very strong re-evaluation of the ground realities. And as a consultant, I wish I was made of copper.