by Charmaine Fernz
Share on FacebookShare on Twitter
How does Scandinavia seem to consistently score big on sustainable development measures?

Scandinavia is known for its vast verdant landscapes and archipelagos, stretching from the European mainland to the Arctic. The northern part of Europe is known to be the front-runner in implementing green regulations and, broadly speaking, working towards a greener future. Sweden, for instance, was the first country in the world to pass an environmental protection act, in 1967. The country also hosted the first UN conference on the global environment, in 1972. Since then, Sweden has not looked back, managing to grow its economy substantially while reducing carbon emissions and limiting pollution.

These measures have trickled down to several industries in the country, and the HVAC industry is part of this strategy. Olli  Seppänen, President, FINVAC (Federation of Finnish HVAC Association) and Editor-in-Chief, REHVA Journal, believes there is a strong explanation for the high interest in green HVAC technology in Scandinavia.

Reliable supply of heating has always been a necessity in the region, owing to frigid climatic conditions. Most of the energy is imported in Sweden, Denmark and Finland, but the energy use and sources are very different. Energy use per capita is quite high in the region, except in Denmark. This is mainly due to energy-intensive industries – forestry and metallurgy – in Finland, Norway and Sweden.

The main source of electricity generation in Norway is hydropower. Finland has a high percentage of nuclear, which is still increasing. In all the Scandinavian countries, the share of renewable sources is much higher than in the EU, on average, but for different reasons. In Norway it is due to hydropower, in Finland and Sweden it is due to the forest industry, which uses all waste material from the processing of wood for the generation of electricity.

In Denmark, the high percentage of electricity is mainly due to wind power. As the primary energy use of buildings is about 40% of energy demand, seeking out higher energy efficiency has been on the regional agenda for decades. Further, the harsh climate has also made people demand a good and comfortable indoor environment, which again has boosted the R&D work in the HVAC industry. Scandinavia has the two important bases covered.

According to research reports from Research and Markets, the global HVAC market is set to rise from USD 93.2 billion in 2018 to USD 133.2 billion by 2023. In the same period, the European market is expected to rise from USD 22.6 billion to USD 30.5 billion. Both the global and European markets are set to grow at a CAGR of 6.2%. The HVAC filters market alone has a stand-alone projected CAGR growth of 6.5%, with a projected value of EUR 7 billion by 2024.

Seppänen elaborates that currently, the focus of R&D work in Scandinavia is on energy efficiency, renewable energy sources and the indoor environment. But after the Paris Climate Agreement, in December 2015, more and more focus has been on the measures that need to be adopted to reduce greenhouse gas emissions. The consensus is that the buildings of the future must be net-zeroenergy structures over their lifetime.

When moving more and more towards the use of renewable energy sources, demand-side management, as a strategy, becomes vitally important. The use of the energy should match with the production. ICT applications, with reliable building simulation and control systems, are equally important.

With regards to renewable energy, according to Eurostat, Sweden stands out, with two-thirds (66%) of the energy used for heating and cooling in the country in 2020 stemming from renewable sources – mostly biomass and heat pumps. Finland at 58% and Denmark at 51% closely follow suit, with more than half of the energy used for those purposes coming from renewables. Iceland, an EFTA (European Free Trade Agreement) country, stands out, with 80% of renewables – mostly geothermal energy – used for heating and cooling.

So, what is the regional obsession with energy self-sufficiency? With seeking out sources of renewable energy? Lars-Olof Johansson, from Engelholms KylKonsult, recounting the genesis of the phenomenon, explains how it all started in 1973, when the regional governments provided incentives, post the war between Israel and the Arab countries, which saw the emergence of the oil crisis. Across Scandinavia – and for that matter, across most of Europe – there was little scope of procuring oil to even heat buildings, a desperate necessity. During the dark days of the crisis, the Swedish government, in a bid to reduce oil consumption, laid down a programme for people living in independent houses and buildings to improve insulation, a bid to reduce energy consumption. Furthermore, the government paid up to 35% of the installation cost, as a subsidy. The initiative, which lasted 15 years, saw an almost 20 % drop in energy consumption in the country.

This was a huge step. The refrigerant regulation followed in 1992. As per the initiative, the government handed out substantial subsidies and loans, with low or zero interest, to encourage more green effective installations.

Sharing a recent perspective, Maja Zoric, Trade and Invest Commissioner, Poland, in Business Sweden, speaks of how environmental change and rapid technological advancement are sweeping aside historical approaches, making way for innovative, sustainable and connected technologies and businesses. “Industry players are being forced to rethink and restructure the way they meet both consumer and regulation changes,” she says. 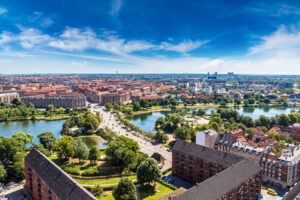 The booming apps industry has changed the way building managers control lighting, ventilation and many other processes and the ability to better measure big data, paving the way for more efficient HVAC systems. Further, in a highly competitive market, there is also a need for continued differentiation, and many HVAC companies see customer service as an area where they can stand out and add extra value.

Sharing his view on the industry, Ronak Monga, Lead Business Development Manager – Commercial Building Services (CBS), GRUNDFOS Gulf Distribution FZE, explains that Scandinavian governments, along with the European Union, are driving sustainability in several ways, not least by having legislative measures in place for minimum efficiency and performance requirements. “Initiatives, such as green tax breaks, taxation on CO2 emissions and green funds for innovation are among the long list,” he says. “These encouraging initiatives are making businesses take steps to improve their carbon and water footprints, helping them become more sustainable.”

Elaborating further, Johansson says that Scandinavia is still working on the EU regulations that were started in 2006. “However, these regulations have a schedule, when refrigerant types should be phased out and replaced with natural refrigerants, the deadline for which is between 2025 and 2027,” he says.

The future for Scandinavian countries is doing business differently, as the global demand across all sectors is connectivity, automated control systems and remote control access. These prevalent features are here to stay and are also contributing to a transformation in the HVAC industry.

Zoric, speaking from a Sweden perspective, highlights three clear trends revolutionising the HVAC and filters industry, and delivering opportunities for accelerated growth for HVAC and filter producers. These are stricter energy efficiency guidelines, connectivity and automation and a consolidating market.

Interestingly, with change always comes the challenge. This is especially true in Scandinavia, with a growing interest in advanced technologies in the HVAC industry. This is because good heating has always been a necessity due to the cold climate in the Norse region. As the primary energy use of buildings is about 40% of energy demand, high energy efficiency has been on the agenda for decades. The harsh climatic conditions have also made people demand a good and comfortable indoor environment. These requirements have also given rise to several challenges within the industry.

Johansson says the main challenges for the construction industry are to reduce energy consumption, the impact on the environment and global warming, and to design or construct buildings that have a long lifetime and a reduced lifetime cost. “These are the major concerns, as we do not just consider the installation costs but look at it like LCC (Life Cycle Costs),” he says.

Seppänen says that in the long run, the EU, with Scandinavian countries in the first row, will stop combustion as a source of heating energy – first coal and, later, the other fuels. The Finnish government has already decided to place a ban on the burning of coal for energy production by 2029. This will lead to innovative new use of integrated energy systems, not only on the building level but also on the community level.

In Scandinavian countries, this development is expected to have a major impact, as there are no extensive natural gas networks to supply cleaner fuel for heating. One of the big problems is how to convert district heating systems to supply heat for the cities without coal-fired plants. The challenge is huge but also offers opportunities for the industry to develop innovative solutions for the changing market. To boost this development, the City of Helsinki is preparing the international one million-euro Helsinki Energy Challenge, a competition to find a solution for replacing coal in the most sustainable way possible. This is a challenge in a city where currently about 90% of buildings are heated mainly with coal-fired power plants.

With a strong focus on sustainable initiatives, Scandinavian countries are leading the way by adopting new trends for many other countries to follow. In Johansson’s view, the next bet would be fuel cells and hydrogen. “Fuel cells are a very good invention,” he says. “When used in a car, the only residues that comes out are water and steam, with no emissions.” Interestingly, the source for the fuel cells is hydrogen, which can be split up by electrolytic catalysts from water, which can be used as petro hydrogen or green hydrogen. “The concept of using hydrogen was unknown a few years ago but now is developing at supersonic speed,” Johansson points out, adding that hydrogen fuel cells are very easy to produce.

Johansson explains that for the HVACR industry, hydrogen can be used as a source of power for remote installations, characterised by the absence of grids. Hydrogen power can also be used to complement conventional grids, to reduce operating costs. “Interestingly, one can have a small shop in a remote village or forest without any grid network,” he says. “With hydrogen fuel cells, you have the air conditioning running.”