by CCME Content Team
Share on FacebookShare on Twitter
Utility provider set to acquire existing DCP in the community for AED 100 million; says it will serve 382,000 RT of cooling, which will cover 750 buildings

DUBAI, UAE, 30 August, 2021: In the presence of H.H. Sheikh Ahmed bin Saeed Al Maktoum, President of Dubai Civil Aviation Authority, Chairman of Dubai Airports, Chairman and Chief Executive Officer of Emirates Airlines and Group, and Chairman of the Dubai Supreme Council of Energy, Emirates Central Cooling Systems Corporation (Empower) has signed an agreement to provide district cooling services to Meydan master community with a total capacity of 382,000 refrigeration tons (RT) to meet the needs of the 750 existing and upcoming buildings in Meydan City, and to acquire the existing district cooling plant for a value of AED 100 million.

H.E. Mohammed Ibrahim Al Shaibani, Chairman, Meydan City Corporation; and H.E. Saeed Mohammed Al Tayer, Managing Director and CEO, Dubai Electricity and Water Authority and Chairman of the Board of Directors of Empower, were also present at the signing of the agreement, Empower said through a Press release. 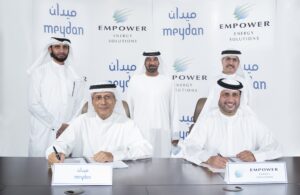 Empower said that as per the agreement, it will provide the entire Meydan master community with district cooling services to meet the needs of the existing and upcoming projects, comprising 750 buildings, including Meydan One, Meydan Avenue, Royal Pearl, MBRAMC – District 1, Meydan Horizon and Meydan Business Park. Currently, Meydan Racecourse projects, which include Meydan Boat House, The Gallery, Meydan Hotel, Meydan Receiving Barn and DHL Building are receiving district cooling energy through the existing district cooling plant with a total capacity of 45,000 RT, of which 25,000 RT are connected to these projects, Empower said. In addition, Empower will invest more than AED 1.6 billion to build four district cooling plants and construct the pipeline network in the development to meet the demand for energy-efficient district cooling services, the utility company said.

H.H. Sheikh Ahmed bin Saeed Al Maktoum said that the district cooling industry represents the cornerstone of the sustainable development of modern cities. Competency in developing and providing world-class district cooling services to customers is a legitimate goal that Dubai is keen to encourage, through the booming investment climate and positive legislative and legal structures, he added. This comes in implementation of the directives of H.H. Sheikh Mohammed bin Rashid Al Maktoum, Vice President and Prime Minister of the UAE and Ruler of Dubai, with regards to promoting sustainable developments.

H.E. Al Shaibani said the agreement is a strategic decision that allows Meydan to focus on its core business, reinforces the company’s commitment to ensuring the comfort and wellbeing of residents, tourists and visitors, and reflects Meydan’s confidence in Empower’s ability to supply world-class services at the development.

H.E. Al Tayer said the agreement comes in line with the vision of H.H. Sheikh Mohammed bin Rashid Al Maktoum to promote the green economy. This is done by achieving the objectives of the Dubai Clean Energy Strategy 2050, which aims to increase the production capacity of clean energy to 75% of the energy mix by 2050, and the Dubai Demand Side Management Strategy, which aims to reduce demand for electricity and water by 30% by 2030, as well as increasing reliance on clean and renewable energy sources, by increasing the area covered by ​​district cooling in the Emirate and protecting the environment and natural resources. Empower district cooling solutions adopt the best practices and technologies, he said. The agreement enables both parties to carry out their tasks to the fullest, and Empower’s acquisition of the district cooling allows Meydan to enhance its efforts to continue developing the city to reach its main goal of completing the remaining urban, tourist, recreational and residential icons under construction, he added

Bin Shafar said, “We are proud of the new strategic partnership established with Meydan – a well-known group with multi investments portfolios.” He explained that the acquisition of Meydan district cooling systems reflects Empower’s diligence on attaining excellence in providing district cooling services and its pioneering role in adopting advanced technologies and solutions of artificial intelligence in its operations, to ensure the highest customer happiness, conservation of natural resources and rationalization of energy consumption. The deal also shows Empower’s effective contribution to the important goal of making Dubai the city with the lowest carbon footprint in the world, in line with the directives of the wise leadership that aims to achieve the objectives of the Dubai Clean Energy Strategy 2050.