by Hannah Jo Uy
Share on FacebookShare on Twitter
Company official discusses benefits of solutions for hospitality sector, applications of precooling solution and market presence across the GCC region

DUBAI, UAE, 7 October 2019: MistAmerica showcased its range of outdoor cooling products during its participation in the Hotel and Leisure show, from September 17 to 19 at the Dubai World Trade Centre. Andrew Waskey, Director – GCC region, MistAmerica, said the company aimed to highlight its flagship products, such as the Mist360 Breeze Fan and the Mist360 Max Fan, which he said, could replace traditional ceiling fans by cooling the air rather than just moving around hot air. “These products have achieved considerable success in the commercial sector over the years, but there wasn’t an affordable commercial-grade cooling fan for the residential market until the company launched the MiniCool fan on Kickstarter, two years ago,” he said. “At this show, MistAmerica’s recently patented larger residential cooling fan – the Wave Fan – also made its international début.”

Waskey said visitors from the show expressed strong interest in the company’s products. He pointed out that evaporative cooling is the most efficient and highly sustainable method of cooling large outdoor areas. “Last year, the company was awarded ‘Outdoor Cooling Project of the Year’ award during the Climate Control Awards, for an evaporative cooling project that was  94% more efficient than traditional air-conditioning,” he said. “Every gallon and a half of water that is evaporated per hour generates a heat offset, from latent heat reduction, equivalent to 12,000 BTUs, or one tonne of air conditioning. Given the rapid air exchanges, outdoors, this type of technology is considerably more sustainable than trying to use direct cooling methods, such as air conditioning.” He added that the products also have minimal maintenance and operating costs.

“I think a lot of people aren’t aware of this kind of technology,” Waskey said. “They think, it’s going to get people wet and it’s going to be uncomfortable, but if they see it here at the stand and visit places where it’s installed, they can understand how it will work in their project.” Waskey said that the company, through its participation, also aimed to address misconceptions related to the technology by explaining the technical aspects of the products. An example of a common concern Waskey said he has seen come up is in relation to legionella, which, he said, is not a valid concern once people understand the stringent water treatment process behind the systems.  Another issue that concerns stakeholders, Waskey said, is the system’s applications for humid environments. However, he pointed out that the system continues to be installed in tropical areas, such as the Philippines and the Caribbean with greater humidity levels than typically seen in Dubai or in coastal GCC region areas. Further, he mentioned that through the company’s weather control station the system can automatically adjust the amount of mist and cooling, depending on the relative humidity. “Real time adjustments are instantly made to the high pressure mist pump through a pressure transducer and a proprietary variable frequency drive program,” he said. “This allows the mist systems to cool even – as crazy as it may sound – when it is raining.” 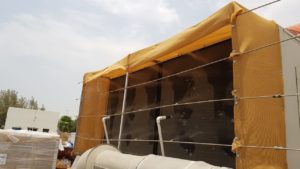 Waskey said the company is also offering its air conditioning pre-cooling technology – the “MAAC-PC” (MistAmerica Air Conditioning Pre-Cooling system) – for the air conditioning and facility maintenance market. The solution, he said, is especially ideal for extending the life and capacity of large chillers, as it is able to reduce energy consumption, enhance savings and prevent compressors from overheating, thus extending the lifecycle of the chillers. “We were asked to apply our products in one hotel as an experiment at the request of one clever director of engineering, and the results were fantastic,” he said. “Just covering one quarter of a chiller, the system was more efficient than other evaporative cooling solutions that facility had tried.” The technology’s water treatment system, Waskey said, averts the risk of calcification of the evaporator coils; further, the nozzle technology incorporated in the system ensures the mist does not leave the coils wet. “At a humid location during a typical July day, the Delta T (change in temperature) that we recorded at the exhaust section of the chiller after passing through the evaporative coils was 8.6˚C,” Waskey said. “Even though some clients estimate that the ROI for the systems is 2-3 months, many companies take advantage of our very affordable rental rates for these systems.”