SINDELFINGEN, Germany / SYRACUSE, USA, 6 August 2019: Bitzer has approved serial production of its ORBIT (model range VL) and ORBIT+ scroll compressors for use with refrigerants in the A2L safety group, the company said through a Press release. The refrigerants concerned – R454B, R452B and R32 – have a low global warming potential (GWP) and have only low-flammability ratings, the release added.

According to the release, the deployment of ORBIT and ORBIT+ make Bitzer the first manufacturer in the world to supply scroll compressors with displacements of between 20 and 80 m3/h (50 Hz) for use with A2L refrigerants.

The familiar ORBIT series in the VA model range, the release said, will continue to be available for operation with A1 refrigerants. ORBIT and ORBIT+ were presented as a world premiere at the Mostra Convegno Expocomfort trade fair in 2018 and are already integrated into the BITZER software, ensuring that they can be quickly and easily configured by customers.

According to the release, BITZER customers will particularly benefit from the A2L approval of the ORBIT and ORBIT+ compressors – both series provide several years of planning security, due to the low-GWP values of the refrigerants, R454B, R452B and R32. Before they were approved for serial production, the release said, the ORBIT and ORBIT+ scroll compressors demonstrated their quality and future-proof compatibility in extensive tests. In addition, the release said, they have been successfully qualified by important OEM customers in their qualification programmes. 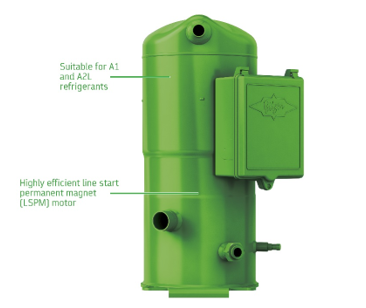