Istanbul gears up to host ISK-SODEX in October

by CCME Content Team
Share on FacebookShare on Twitter
International HVACR fair will unite procurement delegations from EU countries, in particular, as well as from Africa and South America, with Turkish manufacturers for new commercial cooperation opportunities, organisers say 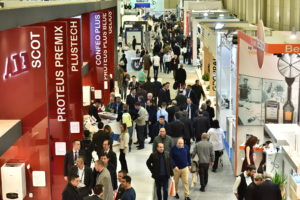 ISTANBUL, Turkey, 21 July 2019: ISK-SODEX, scheduled to take place from October 2 to 5 at the İstanbul TÜYAP Fair and Exhibition Centre, will see manufacturers of HVACR equipment further their efforts in attracting new markets with an export goal of USD 5.5 billion, the organisers of the show said through a Press release.

Turkey will be a key area of focus, with investors keen on investing in the country, said Alexander Kühnel, General Manager, Hannover Messe Sodeks, a subsidiary of Deutsche Messe.

“The air conditioning sector is a significant export area in Turkish industry and continues to set new records every year with its growth figures,” Kühnel said. “The sector’s shift towards state-of-the-art products with a focus on R&D activities in recent years, provides a competitive advantage, particularly in international markets, and draws the attention of foreign investors. The number of foreign investors wishing to establish commercial cooperation with the Turkish air-conditioning sector has increased significantly. Aiming at raising its exports goal by utilizing this increased interest, the sector especially focuses on farther markets with low exports volume. It is of great significance that the sector comes together with target markets at international exhibitions and demonstrates its said potential.”

Noting that the event will be bringing the air conditioning sector and the target country markets together, Kühnel said: “The Turkish air conditioning sector has started to extend its presence to strategic markets, such as Australia, Argentine and Chile. We are aware that Africa continent is also one of the new targets of the sector. We will be increasing the number of foreign buyers from existing countries on one hand, mainly from Germany, UK, Italy, France and Spain, which are parallel to the top five export countries of Turkey’s HVAC&R industry, and on the other hand we will be providing a great opportunity for Turkish manufacturers to meet important procurement delegations from the said markets that are the new export targets of the sector, in İstanbul. We will also be hosting sector professionals from many strategic markets, including, in particular the USA, United Arab Emirates, Iran, Iraq, Qatar, Northern and Western Africa, Russia and Poland, within the scope of the “International Buyers’ Delegation” programme. During the fair, we will also be conducting supportive programs focusing on the advantages of the sector, and providing new opportunities to the exhibitors and visitors for networking, establishing business connections, and exchanging information and experience.”