Variable frequency drive (VFD) technology is not new to the HVAC industry. VFDs have been used extensively for air-handling units, fresh air fans, cooling tower fans and for chilled water, condenser water and make-up water pumps for many years now. With state-of-the-art compressor technology and microprocessor-based control systems, manufacturers offer VFDs, specially designed for centrifugal chillers, and field retrofits, which allow substantial energy savings. I visit so many chilled water plants that are not taking advantage of the massive energy savings they can achieve by retrofitting their constant speed centrifugal chillers to VFD-controlled centrifugal chillers – and hence the compulsion to write this article. The purpose of applying a VFD to a chiller is to save energy – simple as that. A chiller operated at less than full load, without variable speed, must load and unload repeatedly. This is not remarkably efficient. It is possible to realise substantial power savings by controlling the motor’s speed – even over a fairly narrow range. The Affinity Laws state that for centrifugal loads like pumps, fans and chillers, flow is proportional to speed, motor torque is proportional to the square of the speed, and motor power is proportional to the cube of the speed. Let’s assume the operating range for a chiller is 85-100% of capacity, and over the course of a year it averages out to 92%. Then, 0.92³ = 0.78, or 78% of the power the motor draws if it runs at 100% load. On a 1,000HP chiller that means the average power consumption over a year is 780HP x 746W/HP x 8,760 hours/1000, which equals 5,100,000kWh. At a purchase price of 10¢/kWh, that’s an annual power bill of $310,000.

Without the drive, the motor must run unloaded (and you’re paying for it, anyway), or it must start and stop a lot (and the motor will be damaged). So, if the VFD can save you 1,000,000kWh a year, that’s USD 100,000 in savings. In short, a VFD is a very attractive investment, sometimes paying for itself in 12 months or less. The application of VFDs to centrifugal chillers requires a control strategy that understands centrifugal chiller and VFD operation. Typical AHRI conditions are 44/54°F for chilled water and 85/ 95°F for condenser water temperatures. AHRI also specifies Integrated Part Load Values (IPLV), which take into consideration the part-load capacity operation of the centrifugal chillers with varying entering condenser water temperatures. One such standard used for centrifugal chillers is AHRI Standard 550/590-98, which must be adjusted for conditions in the GCC region. 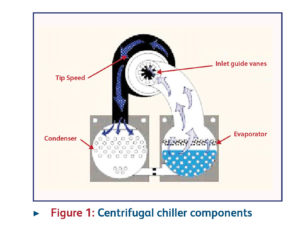 Energy savings with a VFD on a centrifugal chiller 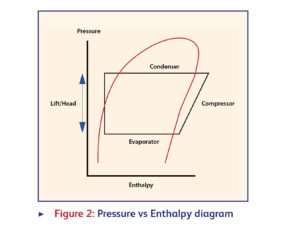 How does the VFD work?

The VFD needs a lot of information to work. A VFD has to continuously monitor several operating conditions, such as chilled water temperature, chilled water set point, refrigerant pressures, IGV position and the actual motor speed. This information is then fed to a microprocessor, which determines the most efficient way to operate. It optimises the motor speed and the IGV position and changes the frequency of the power input to the motor in order
to consume the least amount of energy.

A VFD and controls retrofit can save between 30 and 35% of the chiller’s power usage, based on ambient conditions in the GCC region. To calculate the operating cost of a centrifugal chiller during the full year, all the operating conditions, such as condenser water temperatures and cooling load, should be considered.

Other benefits of a VFD on a centrifugal chiller

With a VFD, power is initially applied for start-up at a very low frequency, which when gradually increased, allows a little motor slip. The result is a high torque per amp of current, minimising the extra amps required to start the motor. Therefore, the inrush amps for a VFD never exceed the 100% FLA of the motor. Other soft starters, such as Star Delta or Solid State, have 200-400% FLA as the inrush amps at the start-up. This makes a VFD an ideal starter, particularly for applications with limited inrush capabilities, such as emergency generator systems. Also, the generators and cabling can be downsized, as they do not have to incorporate extra capacity required for the start-up.

A retrofit with VFD enhances the unloading capability of a centrifugal chiller by varying the speed prior to closing the guide vanes. This allows better tracking of low-load conditions. This also eliminates unnecessary cycling of the centrifugal chiller, resulting in reduced maintenance and better control of the chilled water loop. Smooth starts enhance the motor and compressor life.

Most of the noise generated by the centrifugal compressor is due to the refrigerant discharged at high velocity into the condenser. Slowing down the compressor reduces the discharge velocity at low heads and, hence, reduces noise.

A VFD gives automatic correction to at least 95% at all operating conditions. A normal centrifugal chiller has a power factor of 0.85 at 100% load, which further reduces at part load and can go down to as low as 0.60.

The best real world performance
In the real world, energy performance at real world conditions has little to do with bottom-line energy costs (full load kW per tonne design) – what happens at off-design conditions is much more important. A VFD-based retrofit represents an excellent opportunity for achieving quick payback and return on the VFD retrofit investment, particularly for facilities operating continuously, such as hotels, District Cooling plants, hospitals, residential buildings,  data centres, call centres and factories in the GCC region. Most of the major suppliers of centrifugal technology offer VFDs on centrifugal chillers, but it is important that we not ignore the option of a VFD retrofit on existing centrifugal chillers. Considering the ever-increasing cost of electricity and the pressure to lower indirect emissions, wisdom lies in embracing all implementable opportunities.