by Surendar Balakrishnan
Share on FacebookShare on Twitter
With an emphasis on energy efficiency, emissions, indoor environmental quality, IoT and cybersecurity, the 2019 AHR EXPO more than held its own amidst the growing anticipation and excitement surrounding the Super Bowl in early February, writes Surendar Balakrishnan, Editor, Climate Control Middle East…

The Mercedes Benz Stadium sits eerily still in the Atlanta chill. On February 3, it will see the Los Angeles Rams take on the New England Patriots for supremacy in the 53rd edition of the Super Bowl – the apogee of the uniquely American sport of gridiron football, replete with armour-sheathed gladiators, bedlam and yet, deep strategic thought and pulsating tactical drives. About three weeks prior – on January 14, 15 and 16, to be precise – the Stadium looked on bemused at a different type of hustle and energy, at the neighbouring Georgia World Congress Center, which hosted the 2019 AHR EXPO. Over 45,000 visitors streamed into the venue of the EXPO to gawk at behemoth chillers and at VRF systems, air-handling units and HVAC drives and to sharpen their strategic approach to conditioning the air in the built-environment, among other goals.

The AHR Expo is no less an American institution and, over the years since 1930, has attracted a sea of manufacturers from North America and elsewhere in the world to showcase their technological solutions to consulting engineers, contractors, facilities managers and other stakeholders in the building performance, data centre and other sectors. The 2019 edition was no different, with over 1,800 exhibitors, including nearly 500 from abroad, showcasing technological progress relating to reliability, indoor environmental quality (IEQ) and energy efficiency – from total cost of ownership and emissions points of view. 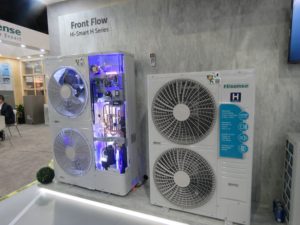 The major players – those with the behemoths and other equipment – showed up, as did those specialising in critical equipment, accessories, components and spare parts, all buoyed up by a surging US economy and overall optimism. The show was an epicentre of relevance for those with solutions for smart homes, including a focus on artificial intelligence, Big Data, the Internet of Things and cybersecurity.

An equally strong narrative revolved around refrigerants, made all the more imperative by recent developments, including the progress global leaders had achieved at the 24th Conference of the Parties to the United Nations Framework Convention on Climate Change (COP24) in December 2018 in Katowice, Poland and, prior to that, in 2016, at the Kigali meeting, where the parties agreed to amend the Montreal Protocol to bring the phasedown of hydroflourocarbons under its purview. Atlanta saw manufacturers of refrigerants among the exhibitors, showcasing gases with a significantly lower global warming potential and also addressing flammability concerns. The first attribute found expression at the EXPO despite the US government pulling out of the Paris Agreement – indicative of the chasm that exists between the federal government and some of the states, which are relentlessly pursuing a climate change mitigation agenda. The second attribute mirrored the hope of a change in US building codes, which would allow for mildly flammable refrigerants to be used in facilities in the country. 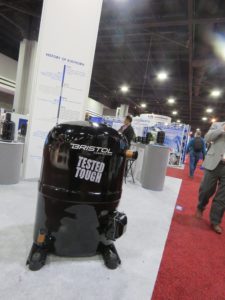 A third key narrative, as briefly discussed earlier, was IEQ. There is a growing awareness in the United States on how better buildings improve productivity and job satisfaction, a point amply made clear by Dr Joe Allen at Harvard’s T.H. Chan School of Public Health, while speaking at the World IEQ Forum, organised and conducted by CPI Industry in April 2018 in Dubai. The results of an independent study on the subject, became the basis of a presentation at the EXPO, which revealed how building quality ranked an astonishing second in contributing to employee satisfaction and productivity when benchmarked against other traditional employee perks, such as bonuses, fitness benefits and flexible work hours.

Overall, the EXPO arguably met its broad objectives of a focused event for the global HVACR community. As Mark Stevens, CEO of International Expositions Company, which organises the EXPO, said: “The HVACR industry is in a very exciting position at the moment, and that energy was evident on the show floor, this year. Attendees came from all over the globe and from every corner of the industry to make this Show a success.” The Mercedes Benz Stadium probably would nod in agreement.