by Benwen Lopez
Share on FacebookShare on Twitter
How are robotics and artificial intelligence shaping the HVAC industry? What are the implications? 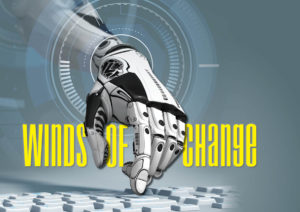 Records show that the history of industrial robots can be traced back to 1954, when George Devol designed the first model. Even then, robots were programmed to do limited and repetitive tasks.
However, as technology evolves and with artificial intelligence penetrating multiple sectors, industry insiders believe the entire robotic industry has made a revolutionary paradigm shift, and transitioned to more critical roles of maintenance and even providing comfort to human beings, as companions and caregivers.

Industry insiders assert that high labour costs and lack of specific talent, which is prevalent in almost every part of the world, has paved the path for robotics and artificial intelligence to penetrate different industries. Agreeing with these impending factors, Frank Nijdam, Managing Director Europe, Walraven, says, “To counter the high labour costs in Europe, we have to adopt a high level of automation.”

He further says the lack of specialised talent is a constant challenge that keeps prodding the industry, owing to the task of offering specialised training to personnel, which is sometimes cumbersome, owing to the continuous investment and time taken for the training. “However in the case of robots, we just have to programme them once, and let them do the job,” Nijdam says.

Speaking from a manufacturing perspective, Kollina Hanskehian, Business Development Director, DigiRobotics Technologies, says: “On the manufacturing side, robots and smart technologies play the best role in accelerating the tech wheel in any factory. They can help achieve the production targets and reduce the cycle time for each production.”

Sharing details of how his company has adopted robotics in the manufacturing process, Nijdam says that Walraven has two product groups – clamps and fixing rails – where robotic technology has been fully integrated with the manufacturing process. Explaining the cycle, he says that right from the raw materials to the final quality check, as per specifications, the robot manages everything based on the algorithms with which it has been programmed. Enthusiastically he adds, “We employ robots not just because of the reduced time to produce the products but also because of the precision they have while assembling the products, which reduces wastage and costs tremendously.”

Evolution of the technology
Robotics and artificial intelligence have gone through multiple evolution cycles. With a protean approach, robots are switching from repetitive tasks to intelligent applications. Elaborating on the evolution of the technology, Hanskehian says: “Five years ago, robotic solution enquiries were few and basic. But now, manufacturers are becoming more aware of the level of innovation, and are looking for better features and advantages, where they can transform their production lines with fully automated, programmed robotic solutions.” Voicing a similar view and elaborating on the level of acceptance of robotic technology in the HVAC industry, Charles Khairallah, President, Robotics Design, says, the evolution of robotics is pushing service providers to ideate and develop even better technologies. He says, “The acceptance of robotic technology in the HVAC industry is growing worldwide. The market is shifting to robotics, and robots will be catalysts in the cleaning and maintenance industry. This is why it is important to put forward high-quality robots to help build trust between the robot and the end-user.” Further explaining the role of robots in the maintenance side of HVAC, Khairallah says that even today, in a significant number of cases, duct cleaning is still archaic, and manual cleaning is a mundane and highly time-consuming task, which has led to disastrous accidents, unexpected overhead costs, and can also be extremely detrimental to a duct-cleaning professional’s health, especially in hazardous environments. To counter these complex challenges, he says, duct cleaning robots are a clear solution to occupational hazards and play a critical role in difficult-to-reach places. “Robots perform cleaning, coating, sealing and inspecting with more precision, and in some projects, they take one-fourth of the time than what a manual labourer takes,” Khairallah says. “These robots are highly in demand by responsible duct-cleaning professionals worldwide.” Sharing a similar view, Sibin James Chacko, Executive Director, EMCC, an HVAC contracting company, says that with ducts requiring intense maintenance, to prevent the build-up of mould and moisture, it is a challenge to efficiently clean a ducting system, especially when there are harder-to- reach areas. “When it comes to deep-cleaning of ducts, robots play the role, especially in huge areas with difficult accessibility,” he says.

Elaborating on the robotic solutions offered by his company for the maintenance of ducts, Khairallah further says: “We offer the portable ANATROLLERM robots, which are effective for airbrushing in rectangular and circular HVAC ducts. They are precision-machined from a rugged aluminium mono-block designed for years of continuous use in the most severe industrial environments.”

Khairallah further explains that these robots increase the efficiency of the ducting system through their sophisticated cleaning process. “The robot efficiently inspects, cleans, coats and seals the duct and provides the highest quality of work,” he adds.

Stressing the importance of cleaning ducts, he says: “Ducts are the perfect breeding ground for bacteria, and they account for one in six people suffering from allergies. The HVAC industry suffers from not being able to maintain the indoor air quality (IAQ), which in return spreads, airborne infections.”

As IAQ gains focus in the industry, robotics has made inroads in this particular segment. One such invention is a mobile robot, Diya One, the brainwork of Dr Ramesh Caussy, CEO & Founder of France-based Partnering Robotics. The philosophy behind the robot is close to his heart, he says. “I was tired of seeing my daughter often fall sick due to air pollution,” he says. “Therefore, I chose to re-direct my skills, and invent Diya One, which will tackle air pollution effects, and be a great benefit for the entire community.”

Speaking with a sense of understated pride, Dr Caussy further says: “When I first spoke about using a robot to clean air to a bunch of scientists, they thought I was crazy. But today, I have demonstrated that I could bring a change in the current system through this invention.”

He adds that this invention not just cleans the air, but also increases the overall performance of the HVAC system, while reducing the energy consumption.

Explaining the key features behind the robot, Dr Caussy says: “The robot is fitted with neuro-inspired artificial intelligence. While detecting polluted air, the robot sucks in the air, purifies it through H13+filters and emits it into the room. While doing so, it can remove 99.95% of the air pollutants, bacteria, viruses and odours, without the use of chemicals.”

The robot, he adds, can also share data related to IAQ and HVAC systems with maintenance companies. By improving the IAQ, and the efficiency of the HVAC systems, the health and the productivity of the occupants are also improved.

With sweeping changes made by the robotics industry, challenges still lie un-countered, although some of them are not complex to deal with. The main challenge is the threat to the workforce.

Although an inventor of automation, Dr Caussy, stresses the need for an ethical system. “Ethics must play a strong role in the robotics industry,” he says. “We must discern to identify whether robots would render human beings, useless or used-less. Robots must be used to assist people and not to replace people.”

Stakeholders like Khairallah assert that robotics combined with artificial intelligence represent the future and can help human beings in many fields.

However, offering a word of caution, he adds: “Robotic technology must be regulated to be controlled, and humans must have total control over this technology. If we don’t control our technology, the technology will control us.”

Speaking on the impact on the labour force, Hanskehian adds: “I have always been asked such a question. However, from my experience, I have observed that with robots coming into existence, the workforce skill requirement changes, and there is a need for technical talent, who can implement the hardware and software integration of robots.”

She further asserts that her company has been facilitating training of employees to develop the ability to control robots, especially workers who are exposed to harsh environments.

Sharing a similar view, Nijdam adds that while robots do bring down production costs, there is a need for skilled labour, especially in process engineering. “So automation does not necessarily kill jobs, but rather it creates a different set of jobs,” Nijdam says.

Echoing Nijdam’s thoughts, Chacko adds that owing to the speciality of the jobs, the impact forms barely 0.05% of the total jobs available in the market; therefore, the implications may not be as drastic as they are portrayed to be.

Bracing for the future

Without a doubt, robotics and artificial intelligence are going to become an integral part of the industry, and there will be some implications. However, as Khairallah puts it, “If we do not control technology, then technology will control us.”