by Benwen Lopez
Share on FacebookShare on Twitter
What heats up the cooling tower market? How can owners and operators protect their critical installations? 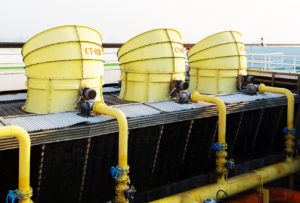 Cooling tower systems are mainly designed to maintain a cool environment for various applications, without causing any pollution breakout or breakdown of temperature control systems. However, some factors turn the heat up for the industry.

Industry insiders point out that factors such as energy efficiency, water efficiency and prevention of legionella are among the top areas of concern for the industry and, in some cases, turn up the heat. Further elaborating, they say even these factors are propelled by elements, such as materials and the kind of technology used while building the cooling towers.

“PFRP material for cooling towers is most preferred in this region, for it has many advantages over the conventional materials of construction, such as concrete, wood and steel,” Imran Ali says. “The material possesses exceptional chemical and corrosion resistance to acid, salt and sand. It is also resistant to seawater, brackish water, treated sewage water and others.”

While the selection of construction materials is critical to driving energy efficiency, the other technical considerations that need focus are the drift eliminators, says Saad Ali, General Manager, Middle East & Africa, SPX Cooling Technologies. “Considering that water efficiency is of paramount importance, drift eliminators play a key role in trapping large water droplets and [preventing] mist from escaping the cooling tower, which reduces the wastage of water,” he says.

Sharing a similar view, Dumont Swezy, Vice President – Business Development, International Cooling Tower, says: “Drift eliminators play a crucial role in reducing wastage of water, because they can achieve the lowest measurable drift rate, which can go as low as 0.0005% of circulating water flow. But there have also been significant advancements made in the heat transfer media component. We now see a greater heat rejection and tolerances towards water qualities.”

Saad Ali also points out that one of the factors that drives up the efficiency of the towers is the acoustics. “While cooling fans are required for the air movement, they need to do so with very low vibrations and sound,” he says ,”Incorporating low-noise fans are crucial for the towers, as they drive up the efficiency.”

Further elaborating on efficiency, Saad Ali, says, “Cooling tower owners need to ensure that they move away from huge amounts of water and high energy usage, by using energy-efficient motors.”

Industry growth can also be attributed to local partnerships, says Neeraj Bhojwani, Business Development Manager, Rapid Cool Group. “To supply quality cooling tower components, we have partnered with Brentwood Industries, manufacturers of superior quality that are tested as per the CPI 135 standard,” he says.

Critical risks
It is a no-brainer that one of the biggest critical risks for cooling towers is the nightmarish threat of Legionella. As was widely reported in the media, in November 2017, Disneyland shut down two of its cooling towers, after one person died and 11 fell ill owing to the disease.

Speaking on the prevention of Legionella, Swezy says, “It is important for cooling tower owners and operators to regularly test and maintain good water treatment protocols to prevent any outbreak of Legionella.”

Adding to Swezy’s views, Imran Ali, says: “Legionella grows best between 22 and 45 degrees C. Anything above this temperature kills it, and any temperature lower than 20 degrees C, makes the bacteria dormant. If the application does not allow you to play around with the temperatures, then a good water treatment practice must be established, with a dual biocide programme, utilising both oxidising and non-oxidising biocide, at least twice a year, along with thorough inspections.”

Imran Ali further asserts that along with these procedures, corroded parts must be replaced and algae and scaling must be removed, under trained professionals.

Offering a concurring view, Saad Ali affirms that prevention of Legionella is a top priority for his company. “When exposed to sunlight, the growth of Legionella is prevented. Other ways of preventing the disease are through drift eliminators, which act as louvres, and move the water,” he says.

To effectively pre-empt an outbreak of Legionella, Saad Ali says, cooling tower operators and owners must carefully study the ASHRAE Standard [on] Minimising the Risk of Legionella Associated with Building Water Systems.

Elaborating on the type of technologies offered by his company, he says: “We offer ultraviolet light disinfection technologies, which will prevent any build-up. Our filtration system is also our water sweeper system that cleans the tower from the bottom of any stagnated water and sludge. We also ensure that the make-up water is cleaned thoroughly.”

Pointing back to the selection of products, Bhojwani says, “Choosing a good product that has been independently tested is a core principle to prevent an outbreak of Legionella.” The other practice, he says, is to sign up with good maintenance companies, who understand the fundamentals of Legionella and have the expertise to tackle it. On the other hand, he adds, when cooling towers are designed and constructed, enough space for maintenance access must be provided, so that personnel are not struggling just to enter the tower for maintenance.

Market dynamics
The dynamics of the cooling tower segment are a combination of challenges faced by cooling operators and owners as well as opportunities, which the industry needs to take advantage of.

Highlighting some of the challenges faced by cooling tower manufactures, Saad Ali explains that delay of payments is a big challenge in the industry, but which is prevalent in other industries, as well.

Even from a distributor’s perspective, stakeholders like Bhojwani feel the heat of delayed payments. “Cooling towers are relatively new in this region, and people continue to squeeze in on the pricing,” he says. “The problem is that the quality of raw material is a compromise, which impacts the pricing and the entire chain.”

The other challenge, Bhojwani adds, is the lack of specialised future talent, which is why his company collaborates with engineering schools and organises technical seminars to raise the level of interest among budding engineers.

The geo-political situation in the Middle East, Saad Ali says, adds to the list of concerns, especially when countries break their diplomatic ties with each other. “The political instability among countries like Syria, Egypt, Turkey and some African nations, affects the growth patterns of the industry,” he adds.

On the other hand, the industry also views opportunities, especially in the retrofit area. “Industrial opportunities, such as retrofitting, can grow when governments start to reduce subsidies, so it also depends on governments to drive the growth,” Saad Ali says.

Wrapping up
Although the industry is faced with multiple challenges, water, energy efficiency and prevention of Legionella remain the core market concerns, and from what it seems, it requires a concerted effort by manufacturers, owners and operators to ensure that these three areas of concern remain under control.