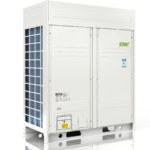 Chigo has launched the CMV-T VRF system, which the company said, is suitable for T3 conditions. The full DC-inverter system, Chigo added, has won tenders for two projects – Volgograd Arena and Nizhny Novgorod Stadium – for the FIFA World Cup in Russia in 2018. The fact that the technology has won the confidence of the organisers indicates the good performance it is capable of, Chigo said.

According to Chigo, the CMV-T comes with a DC compressor and DC brush-less fan motor. It covers a wide capacity range, starting from 8 HP to 22 HP for single module, with a maximum capacity of 88 HP, where four 22 HP units are combined, Chigo said.

The CMV-T also covers a wide operating range and can operate stably at extreme temperatures ranging from -20˚C to 55˚C, Chigo claimed. Besides, it has various safety-protection features to keep running in a stable manner, Chigo said. The CMV-T, Chigo added, has a three-stage back-up function, which allows the entire system to work even during emergency situations.