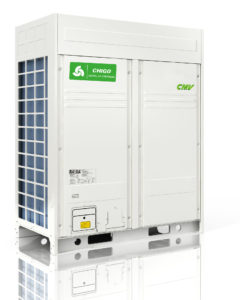 Chigo has launched its CMV-T, which the company described as a T3-type, high-ambient and high-efficiency, full-DC- inverter VRF system. The system also has a DC compressor and a DC brush-less fan motor.

According to Chigo, the CMV-T covers a wide capacity range from 8HP to 22HP for single module, with a maximum capacity of 88HP, where four 22HP units are combined. The CMV-T also covers a wide operating range and can operate stably at extreme temperatures ranging from -20˚C to 55˚C, the company claimed. Besides, it has various safety protections to keep running in a stable manner and to keep delivering high efficiency, the company further claimed.

According to the company, the CMV-T has a three-stage back-up function, which allows the whole system to continue working even in emergency situations.