‘The Fire Code is the result of analysis of past learnings’

by Benwen Lopez
Share on FacebookShare on Twitter
Terry Johnson FIFireE, Senior Fire Service Advisor, Operation Department of Dubai Civil Defence (DCD), speaks on the new Fire Code and also on how he is eager to listen to HVAC manufacturers share their knowledge and experience, in this interview with Benwen Lopez of Climate Control Middle East. Excerpts... 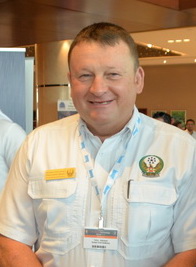 WHAT DOES THE RECENTLY UPDATED UAE FIRE AND LIFE SAFETY CODE OF PRACTICE MEAN FOR THE HVACR INDUSTRY?
There are specific sections related to HVACR that have been addressed in the code. The entire code has been updated and put into a more localised perspective. There has been a significant learning since the issue of the code, through operational and shared practices, with different authorities and industry. We have also analysed our past learnings, and it is reflected in the code.

MALFUNCTIONING OF ELECTRICAL EQUIPMENT IS CAUSING FIRES. WHAT IS DCD DOING TO ADDRESS THE ISSUE?
At every incident, we carry out two types of investigations. One would be from an operational perspective, which is to examine the performance of our crews and commanders, and to ensure that all operations are as per our standard operating procedures. We also investigate to see if the facilities and security managers have carried out their roles, according to the fire safety code for either tackling the incident or subsequent evacuation. We also do a fire investigation from a cause-and-effect perspective, so we look at the possible cause of the fire, and the major effect it had on the building. We look into the contributory factors that cause the spread of fire, and what possibly lead to the major part of the damage. These investigations are parallel to the police investigation. But during these joint investigations, we try to identify if there are any trends or particular brands of equipment or certain type of equipment or a certain process that cause the fire, and we take the necessary preventive action. We also look internationally to identify if there are any trends of the similar type of fires, and we store this information in our database for future learning, and we may even use it for a fire safety campaign, where we advise the general public that this particular device, apparatus or process is possibly a fire risk.

ESMA (EMIRATES AUTHORITY FOR STANDARDIZATION AND METROLOGY) HAS INTRODUCED A STANDARD CONCERNING THE INSTALLATION OF ELECTRICAL EQUIPMENT IN COMBUSTIBLE ENVIRONMENTS. HOW WILL THIS STANDARD BENEFIT THE INDUSTRY AND DCD?
Any organisation or individual that feeds into the fire and life safety system is obviously a significant advantage. In the UAE, we are living in a dynamic environment, both in built-sense and in population. While we are fortunate here in the UAE to have a very diverse population that offers a variety of significant challenges, it also brings a series of threats, because not everyone’s perception of fire safety is the same. Therefore, anyone that can feed into the protection of the citizens is very useful for us, because they may have particular expertise in fire protection systems, which will obviously be a support for us, and, we need the support from other agencies and organisations. We would also study whatever they may have contributed, to see how it aligns with our overall strategy and goal, to ensure that UAE becomes one of the safest places in the world to live.

WHAT ARE YOUR THOUGHTS ON THE PROPER COMMISSIONING OF EQUIPMENT TO PREVENT FIRES?
I think it is critical, and we would like to be involved right at the design stage, and we would also like to understand the design concepts and philosophy of any developer, including their thinking behind the development or installation of certain types of equipment. On the other hand, the Dubai Civil Defence has a very rigid accreditation system, so any equipment related to fire has to be fully endorsed by us, and we would have to check the credibility of that particular apparatus, and we are becoming more mature in our inspection regime. We also have a very strict set of requirements for any contractors that are installing such equipment and commissioning it, and it is a very critical element for us that the issue of installation and commissioning is carried out according to the standard, and flawlessly.

THERE ARE INSTANCES OF THE MEP INDUSTRY USING A LOT OF PRODUCTS FOR PIPING THAT ARE MADE OF PVC MATERIAL, WHICH IS HIGHLY COMBUSTIBLE. WHAT ARE THE MEASURES BEING TAKEN BY DCD TO PROHIBIT THE USE OF SUCH MATERIALS?
As a product, we would be looking at the certification and accreditation of that equipment. If it was manufactured in the UAE, it would have to go through a regular set of fire-testing procedures with results, which shows us its performance and behaviour during a fire. We also investigate to see if these products prevent or cause the spread of fire. The product also has to be subjected to a series of rigorous tests in a certified testing house either in the UAE or abroad but which is accredited by the Dubai Civil Defence.

IN WATER SPRINKLER SYSTEMS, THERE IS A LOT OF CORROSION THAT TAKES PLACE DUE TO THE COMPOUND REACTION OF WATER, OXYGEN AND IRON? WHAT CAN MAINTENANCE COMPANIES DO TO PREVENT CORROSION IN PIPES?
There is a set standard by the UAE fire code and the NFPA (National Fire Protection Association) that mainly covers the servicing and maintenance of such systems, and periodically it should not be only tested but also serviced completely. This would possibly be draining a certain system or section of the system or testing of the water quality and for any degradation in the pipe work.

The Montreal Protocol is very strict, and if you look at the section of the UAE Fire Code 2011, which is replicated in 2015, we as an authority do not support the production or the use of any fire-fighting equipment that have HFCs present, owing to the severe impact on the environment, and its contribution towards global warming. In most uses, it is banned, apart from essential use, such as aviation, and there are certain aspects of the military that use it. And to be able to supply it, one has to get a certification from any certifying body that makes a case that one is qualified and able to deal with HFCs. It is not something that a wholesaler or a manufacturer of fire equipment would be able to get. It would be a specialised area, because the Montreal Protocol clearly states HFCs have to be phased out without compromise, and UAE is one of the signatories to that protocol, and we support it. In fact, there were a couple of instances where people would come up with some innovation, but when it was tested, it actually would emit an HFC gas, and we immediately withdrew our support and would not go forward with the product.

WHEN A MAJOR FIRE BREAKS OUT IN A BUILDING, SPECIFICALLY IN AN UNDER-CONSTRUCTED PROJECT, WE OFTEN FIND A BLAME GAME PLAYED BETWEEN DESIGNERS, DEVELOPERS AND CONTRACTORS. WHAT IS DCD DOING TO BRIDGE THIS GAP, SO THAT THEY COLLECTIVELY TAKE RESPONSIBILITY?

We have addressed it by issuing a very strict code of ethics. There is a section concerning under-construction projects and developers, and the responsibilities of individuals and companies, right through from building owners, developers, facility management companies and, then, the actual occupants of the building. It is an aggressive methodology to reduce the number of incidents and collectively make it a more caring and safe society to live in. While we are on the fast track of development, particularly in Dubai, and we are blessed with some of the best imaginative designs, it does throw up some challenges, because we tend to find that if you are not policing certain construction companies, developers and building owners, then there are shortcuts made, unbeknown to them. I am sure that they do not appreciate that these dangerous practices could lead to an unsafe environment or a hazardous situation. Since they are not experts in the field, we come along and give active advice and send out inspectors to aggressively go out and make sure that these people are following the fire code.

Unfortunately, we tend to find that certain accidents are due to perhaps the ignorance and avoidance of specific areas that are covered in the UAE Fire Code, and this is something that we are taking on actively. We are looking at a very aggressive campaign to educate all sections of society, to ensure that every one is sharing that responsibility, thus creating a safe environment to live in. We also share workshops with various associations and address fire-safety issues.

WHAT ARE THE CHALLENGES FACED BY THE DCD, DESPITE THE LEGAL BACKING?

The constant challenge is trying to get that message to everyone, that there has been a tremendous amount of investment to install the fire-safety systems in a building, and not just in the active systems but also the passive systems, like the fire doors and emergency exit systems. And these systems have been installed for a purpose, and it is for their life safety and protection and to minimise the effect of a possible fire that might occur on the premises. It is also about upgrading citizen’s knowledge and acceptance of why we have fire safety codes, and why we have training elements, and then for someone to come along and quite ignorantly ignore these systems is a big frustration for us. From a simple propping open or removing a fire door, which is effectively protecting someone’s life to the ignorance of the maintenance company, which knowingly switches off an alarm system or a sprinkler system, because it is either giving false alarms or leaking, instead of fixing it; we say that those systems have been provided specifically to protect lives and property and to just blatantly ignore them and switch them off, are again a source of frustration to us, and we hope that these systems are not ignored but rather are efficiently cared for.

WOULD YOU LIKE TO CONVEY ANYTHING ELSE TO THE HVACR INDUSTRY?

We would like the HVACR industry to share their knowledge and experience with us, because we love to learn, and it boosts our expertise all the more. Many manufacturers have got learning from their experience, and it would be helpful if they share their knowledge on how their product or system fits in our environment. Of course, while we do have our expertise to evaluate, it is always good to have two-way conversations. H.E. Major General Rashid Thani Al Matroushi, FiFire, Director General of Dubai Civil Defence, always says that anyone can come to us and share an idea or innovation, and if they want to discuss any particular hazard, risks or concerns, they can approach us, because we are here to support everyone.