District Cooling in the air in Jordan

by CCME Content Team
Share on FacebookShare on Twitter
The Abdali area in Jordan’s capital, Amman, needed cooling and heating solutions customised to suit the ambience of the upmarket hub, while working within the constraints of the country’s climatic conditions and water scarcity. Araner proposed a design based on air-cooled chillers with zero water consumption. We bring you the case study…

THE BACKGROUND
Abdali is Amman’s new downtown district that provides the Jordanian capital with the central business, social and residential destination it needs as a regional business and tourism hub.

An ample investment for the creation of modern and luxury buildings, towers, residences, business centres and commercial areas has been developed with a total value of more than USD 5 billion. A lot of green areas, parks and a central boulevard have also been included in the project for people to get around on foot and enjoy the scenery. Araner, an engineering group specialising in refrigeration, cooling and heating, was tasked with finding thermal comfort solutions.

CASE-IN POINT
The challenge – what did Abdali need? The weather in Amman is quite extreme – incredibly high temperatures during summer and freezing night-time temperatures in winter make it difficult to live indoors without heating and air conditioning. Amman has another handicap, which introduced further challenges to the project: Water availability is scarce. Typically, a 52,000 TR cooling plant water consumption is out of the range that Amman can afford to supply. 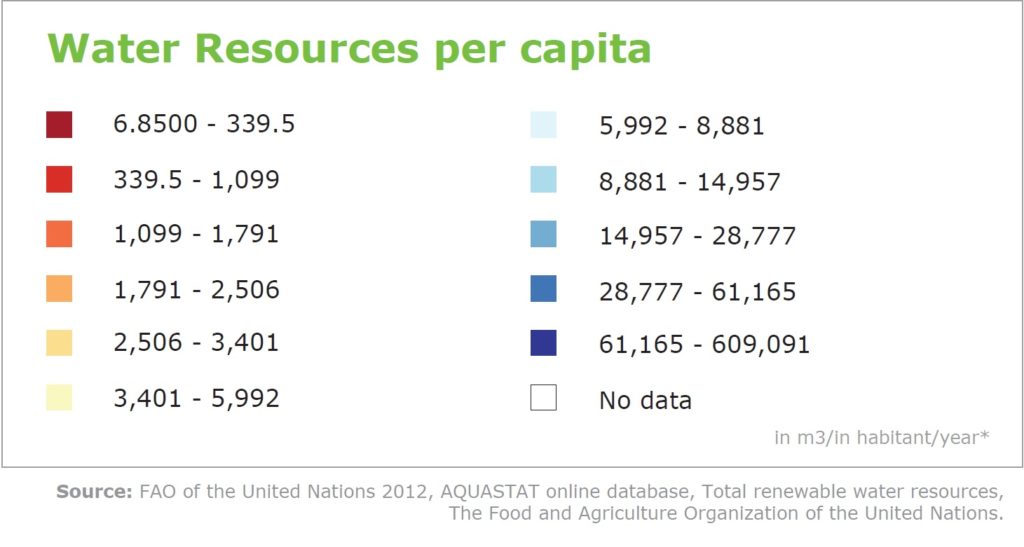 THE SOLUTION:
District Cooling was selected as the most efficient and reliable solution for the chilled and hot water supply of the new development. The total cooling capacity was calculated to be 52,000 TR. Efficiency is a crucial parameter for these kinds of plants, as the amounts of energy consumed throughout the year is very high. Any improvement in efficiency would result in huge savings in any developer’s running costs. Reliability was also a must, as so many residences, hotels, people and businesses depend on it. Those requirements are typical of any District Cooling plant worldwide.

Araner’s air-cooled chillers were able to achieve almost the same yearly average COP than a system based on cooling towers but with zero water consumption. Positive results were achieved by deploying three products:

2. The implementation of long-term thermal energy storage tank, which allows the chillers to work mainly at night with low ambient temperatures for more than 70% of the hours per year

3. R-717 refrigerant, which is more efficient than typical Freon refrigerants In addition, it is much more environmentally friendly.

PROJECT EXECUTION:
The relationship between Araner and the Abdali District Heating and Cooling started in 2009 with the installation of a temporary plant with a capacity of 2,500 TR supplied by two chillers of 1,125 TR each, and one boiler of 5,000 KW. They could easily satisfy the demand that the developers had at the early stages of the District.

Five years later, at the end of 2014, when most of the buildings had been occupied and the demands could no longer be satisfied with temporary chillers, the construction of the final plant started. In order to be able to provide cooling and heating at the right time, the project was defined by two key milestones:

The main challenge of the project execution was to achieve these two deadlines within a tight framework, bearing in mind that within 274 calendar days (nine months), only the skeleton of the building and half of the tank, where the electrical rooms should be placed, would be erected.

In order to reach these targets, close coordination between civil, mechanical, electrical and control departments was undertaken to install all of the equipment with the required quality and within a very tight schedule.

Araner’s personnel from different departments were mobilised to the site to supervise the installation and commissioning of the main equipment.

For Milestone 2, the chillers installed in the temporary plant were dismantled and delivered to Araner’s workshop in Spain, in order to carry out maintenance and install all the improvements that had been developed by Araner’s engineering team during the past years.

Changes to the discharge line, modifications in the oil separator supports, rearrangement of the interior piping or oil separator filters were just some of the modifications that were applied in the compressor units in order to improve their performance.

Thanks to the quality of equipment installed in the compressor units and good maintenance performed by the company’s O&M team, the components were still in perfect condition after six years of working.

Once all the equipment was installed at site, and due to pre-installation being carried out to a high degree of precision, it took just 30 days from the plant being energised by the local electricity authority (JEPCO) before starting the supply of chilled water to the network. 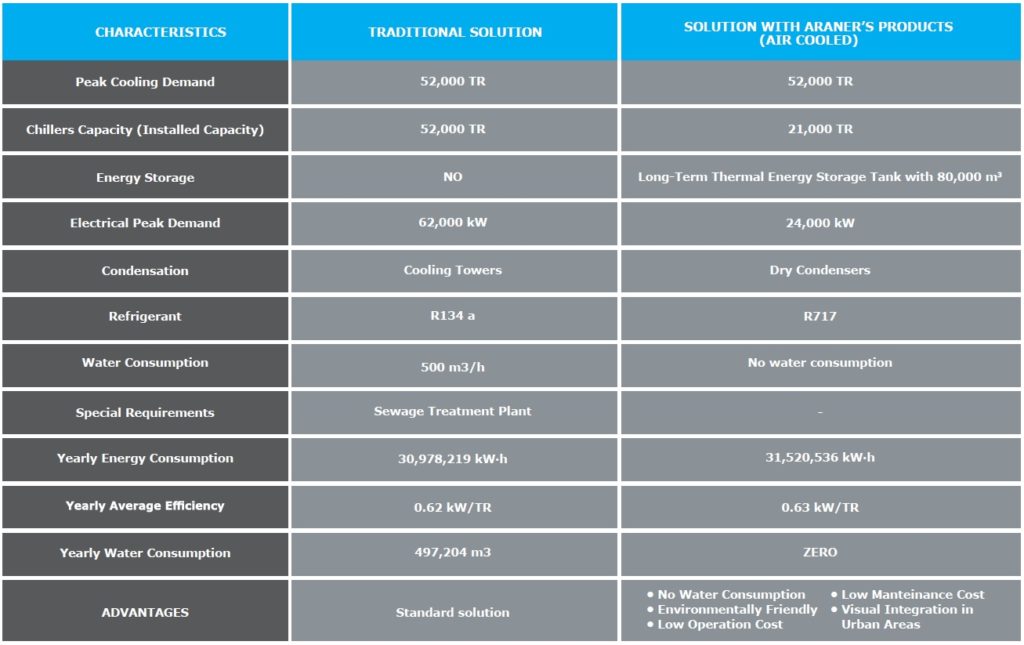 The following tests were performed with a professional and multidisciplinary team from Araner:

RESULTS
With Araner products, the energy consumption all around the year is very similar to a system with cooling towers, but the water needs are eliminated. The high-performance results of the final cooling plant have been certified by several international consultants and by the Jordanian Royal Scientific Society.

OTHER POSITIVE OUTCOMES
The project is projected to be a reference in the Middle East for similar developments not only because of its aesthetics but also because of its sustainability: All the buildings within the complex will be LEED certified. To achieve this certification, a lot of measures have been implemented for energy efficiency, including a District Cooling plant.