The Ministry of Environment and Water has revealed that the rain experienced on January 3, has resulted in the collection of more than 97 million gallons of rainwater from various dams and barriers located across the country, especially in the northern region.

The downpour, which reportedly ranged from low to heavy, was experienced all over the country, particularly in the northern region of Ras Al Khaimah (RAK) and the inclined areas of Al Tawyeen, Naheela, Al Beeah, Qada’a, Ghalila and Shaam.

H.E. Engineer Mariam Mohammed Saeed Hareb, Assistant Undersecretary of Water resources and Nature conservation Affairs, Ministry of Environment and Water, led a group of dam management consultants and engineers from the Ministry to inspect the dams and barriers where the rainwater was collected, said the Ministry communique. The move, it added, was part of the Ministry’s implementation of an operational plan to administer, monitor and operate dams and barriers based on technical standards and requirements, which it has adopted in line with international best practices in the continuous monitoring of dams. 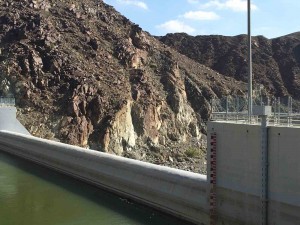