by Rajiv Pillai
Share on FacebookShare on Twitter
Air-distribution systems, such as grilles and diffusers, are elements that not merely enhance the design aesthetics of a room but also affect indoor air comfort and, more importantly, influence the health of occupants in a building. In the backdrop of future mega events like EXPO 2020 and 2022 FIFA World Cup, industry experts voice their views on the critical role played by air-distribution systems. Rajiv Pillai has the story…

Following Dubai’s successful bid to win the EXPO 2020 and Qatar bagging the rights to host the 2022 FIFA World Cup, there appear to be signs pointing to a ramp-up in demand for air-distribution devices, such as grilles and diffusers, in the Middle East region. Many HVAC industry insiders concur that the demand for air-distribution systems is expected to go up in the coming years. Balagopal V Nair, Key Account Manager, Technical, at Faisal Jassim Trading Company, says: “We foresee a huge potential for air terminal and control products in another five years. Already, there are more than 60 hospitality projects, plus other residential and commercial projects planned in and around the EXPO 2020 arena. WTC and Al Maktoum Airport are in the pipeline to meet the EXPO demand.”

Talking about the current status of grilles and diffusers, Brian Suggitt, Managing Director at Systemair, says that the market for air-distribution systems has been fluctuating over the last 12 months, with no definitive stability. However, he, too, believes that as the region moves closer to the mega events, demand will increase. To succinctly summarise, using Bassam Nazzal’s words: “Growth is expected, but the effect needs time to materialise.” Nazzal is the Managing Director of Beta Industrial.

Besides the fact that air-distribution systems are a necessity in all projects, the other drivers, Nazzal says, are price, delivery time, architectural concerns, quality and performance.

Elaborating on architectural aspects and performance, Nair highlights how the shape and size of grilles and diffusers play a major role in enhancing the interior design of a building. Owing to this, there could arise a conflict of interest between MEP engineers and architects, he adds. “On the one hand,” Nair explains, “engineers are concerned with the performance, while on the other hand, the architects are interested in the overall look and appearance. At times, performance and look might go hand-in-hand. We see a lot of requirements for custom-designed grilles that meet both the requirements.”

Suggitt, echoing similar views, believes that aesthetics should be paired with correctly performing products, adding that it is absolutely important to improve the air flow in a room and, at the same time, reduce the level of noise pollution.

Choosing the right grille and diffuser will have a lot to do with the needs of the physical space (see side-bar, Air Diffusion Performance Index). The placement of grilles and diffusers will determine how far the air will travel and how much area it will cover. Therefore, from IEQ and engineering standpoints, one must carefully consider the criticality of air-distribution systems. “If the design of the product is incorrect, you could have an inferior, noisy and uneven air discharge,” Suggitt says. “This, in turn, can cause discomfort in the workplace or room, resulting in unhappy occupants and potential reduction in the efficiency of those occupants.” He goes on to highlight that from the perspective of IEQ in schools, the level of teaching and pupils’ attention would deteriorate. Another scenario, he says, would be when an owner is trying to rent out his property; if the air-distribution systems are defective, then this could have a negative impact on the value of the property. To this, Nazzal adds that the overall cost of maintaining HVAC installations would increase if the air-distribution systems are not proper.

Despite several manufacturers increasingly becoming aware of the critical role played by grilles and diffusers, there are other obstacles that they need to tackle, market-wise. The challenges faced by manufactures are, typically, price and quality, says Ohanian. He explains: “The cost of the raw material [aluminium] is the same for all manufacturers, but the type of profile/thickness matters a lot in the final production cost. Several local manufactures compromise on the quality to reduce the cost, which poses a challenge for reputed manufactures.”

Suggitt, on his part, points out that many products are not tested in accordance with internationally recognised standards, implying that the market is primarily price-driven rather than specifications-driven. His verdict: “Like everything, the best quality in all aspects will yield the best results.” 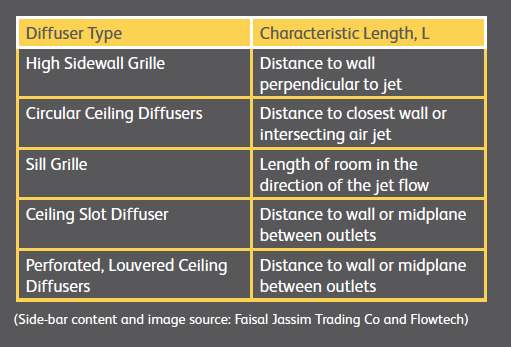