What ails our industry – Part V

by CCME Content Team
Share on FacebookShare on Twitter
In his continued endeavour to seek answers to what ails our industry, George Berbari in Part five of the series takes a closer look at fresh air AHUs with total heat recovery wheels…

I have played a major role in two ASHRAE publications and the introduction of run-around coil in 1993 and double heat recovery AHU in 1999, and set the trend in the Middle East’s fresh air treatment. To my great disappointment, I have found that serious cross-contamination and total wheel quality issues have begun to emerge from several installations in the UAE without eliciting any serious response from the industry. I have also discovered that none of the major manufacturers are purchasing the wheels based on either the credentials of the suppliers or subjecting the products to rigorous performance test.

Another problem is that both AHRI and Eurovent focus on thermal performance and not on cross-contamination, and their entire third-party tests covering cross-contamination are based mainly on SF6 tracer gas that neither represent odours of fried onion from the kitchen nor those emanating from the toilet, which are made up of complex and diversified chemicals.

I have started to see designs that are put on the kitchen exhaust electrostatic and carbon filter prior to entering the wheel. This not only consumes more fan power but also necessitates carbon filter replacement every three to six months, depleting a big portion of the savings achieved by the heat recovery wheel. A proper method of cooling and ventilating a kitchen would be to install an independent FCU to cool the kitchen, and to have the exhaust air taken from the kitchen’s false ceiling, while the residential kitchen hood is left to recirculate the air at the time of cooking, in order to capture grease and reduce the smell of cooking.

Additional design mistakes include excessive exhaust air – double of what ASHRAE 62.1 requires – for toilets 25 CFM (12 L/s) and for the kitchen 50 CFM (24 L/s) on continuous duty. Residential buildings are exhaust-air dominant. For example, when we select exhaust air at minimum value for a one-bedroom apartment of 750-square-foot (ft2) built-up area, with one and a half toilet and one kitchen, it would require 2×25+ 1×50 = 100 CFM of exhaust, and fresh air is selected at 10% higher to maintain positive pressure, which would be 110 CFM of fresh air, while the Fresh air requirement, as per ASHRAE 62.1, is 750 ft2 x 0.06 CFM / ft2 + two person/apartment x 5 CFM/person = 55 CFM. Hence the selected fresh air of 110 CFM based on exhaust translates to double the fresh air requirement. A question arises here as to why we still see exhaust air specified at 30 to 50 CFM/toilet and 60 to 100 CFM/kitchen. And why are we seeing exhaust air quantity of less than 90%, and sometimes as low as 50% of fresh air in residential buildings? 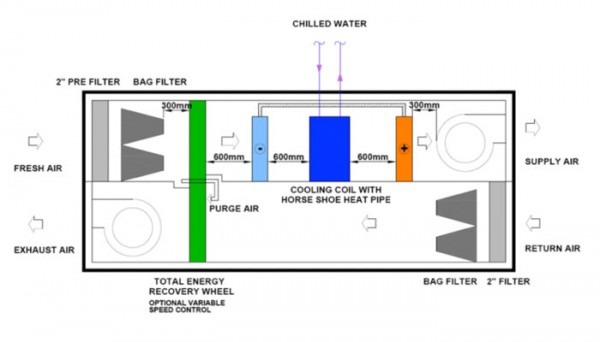 Another common mistake is, when the manufacturer selects the cooling coil of fresh air AHU based on 500 FPM (2.5 m/sec) face velocity, for example, a 10,000 CFM AHU would require a 20 ft2 (1.86 m2) coil face area, and typically they would go for a 2 x 1 m section for fresh air and a 2 x 1 m section for exhaust to allow for the coil + headers to fit. This will allow a wheel rectangular section of maximum 1.92 x 1.92 m, and the wheel diameter that typically is selected would be 1.8 m with face velocity exceeding 800 FPM (4.0 m/sec), resulting in effectiveness as low as 65% in lieu of the 80% that is desired. Another factor that lowers the wheel effectiveness is 200 mm deep wheel media compared to 270 mm. The low wheel effectiveness would increase the cooling coil from a desired 35 BTU/CFM to as high as 65 BTU/cfm, increasing the total building cooling energy by as much as 10 to 15%!

Due to cross-contamination concerns, many hospitals avoid using wheels, and many more clients are extremely concerned about the wheel use, and request guarantees from suppliers that there will be no odour carry over. Very few suppliers or manufacturers are willing to offer such guarantees. This has led many designers and contractors to wrongly offer sensible recovery for the most humid city on Earth, where during night or off-peak milder, but more humid hours, the sensible recovery will diminish to zero.

In this context, many are asking if there are any other alternatives to thermal. Why do I feel responsible and a bit guilty that I have introduced the double heat wheel concept to the Middle East? Is it I who needs to find an alternative, or is there someone else who should do that?

I have been introduced to liquid desiccant dehumidification by the Masdar Team, and I have been requested to analyse the concept. I have done so, and have later assisted my university, the American University of Beirut (AUB), to have one unit on which they have conducted a few studies. I have also designed a city-wide liquid desiccant centralised system with geothermal last stage heat used for regeneration for the entire Masdar City. But as with all new ideas, they require maturity, and need to start small and develop proven track records prior to getting into massive adaptation.

Let me now explain what liquid desiccant is, and if we can start introducing the technology on a small scale.

Liquid desiccant is basically a salt Lithium Chloride solution that has 40% concentration and has affinity to water moisture. As the humid fresh air passes over plates with flowing desiccant, the desiccant absorbs humidity from the air, and the air stream is dryer and hotter as it passes through. As the desiccant absorbs humidity, it dilutes to 32% concentration, and requires either a regenerating hot air or the heat exchange with the exhaust air stream to regenerate it back to 40% concentration, so that the cycle can repeat itself.

A small demonstration unit of 1,000 CFM capacity has been ordered, and will be installed in the UAE at a demonstration centre with 24/7 monitoring. The second step then would be to start real-life applications that will prove the concept and allow for wider implementations in the GCC region. Does that mean we need to discount the thermal recovery wheel? Of course not. But we need to filter those with extremely low cross-contaminations through new testing methods and more vigorous third-party testing, as well as manufacturer guarantees for extremely low cross- contaminations that avoid bringing back kitchen cooking odours into residential buildings. 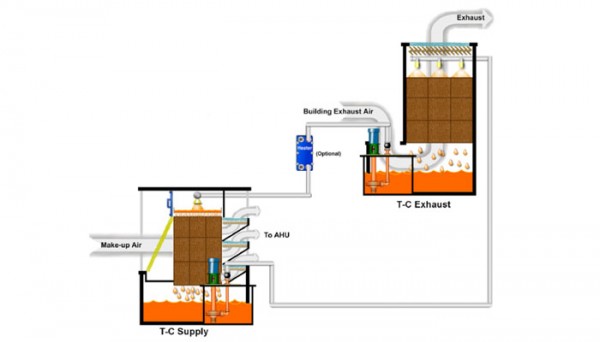