What ails our industry – Part III

by CCME Content Team
Share on FacebookShare on Twitter
In this, the third of a six-part series, George Berbari focuses on the variable refrigerant flow industry in the GCC region, and talks of the next big thing – the variable water flow (VWF) system, which he sees as a panacea for overcoming current challenges

The variable refrigerant flow (VRF) system, also known as VRV, has become the latest point of interest, especially when the talk veers to villas and some profiles of hotels, residential and office buildings in the GCC region.

The main selling points of VRF systems are a high-efficiency range of between 1.1 and 1.35 kW/tonne at design ambient, variable speed compressors that further decrease power consumption at mid-season ambient temperatures, ultra-low noise and a reduction in the number of outdoor units.

Further, VRFs are popular, because they involve a low-noise compressor on the roof, an arrangement that saves roof or outdoor footprint, thereby releasing valuable space and also improving aesthetics. They also feature versatile and ultra-low-noise indoor units, which come in multiple formats, such as ducted-, decorative cassette-, wall- and floor-type units. Further, they use the zero ozone-depleting-potential (ODP) refrigerant, R410A, which it must however be noted, comes with a global warming potential (GWP) of 1,725 when compared to CO2, which has a GWP of 1. Yet another virtue is that R410A has 11% higher enthalpy, or refrigerant effect per unit weight, when compared to R134A and, hence, requires smaller piping.

A key drawback of VRF systems is that it is very difficult to measure the refrigeration capacity in the field from the outdoor condensing unit; typically, tests are made at the individual indoor unit (air side) to validate capacity. Also, R410A has a lower co-efficient of performance (COP) – six per cent lower than R22 and 8.4% lower than R134A. Further, VRF systems operate at an excessively high condensing pressure of 35 Bar, which increases the possibility of leakage. Also, the small piping cannot be flushed, and soldering or welding can obstruct refrigerant flow and impact performance. Further, many high-end hotels require expensive refrigerant monitoring systems for every guest room. (The cost of installing the systems could be in the range of USD 700 and USD 800 per room.

The main drawback of VRF systems is that manufacturers have yet been unable to prove beyond doubt their main selling point, which is the efficiency of the systems.

In the past, I have raised some concerns on this subject, about how manufacturers need to present validated field data, taking into account the fans operating at part- or no-load conditions, the losses involved in extensive refrigerant piping and the impact of welding the joints. My calls to manufacturers have totally been ignored, and all this while hundreds of millions of dollars’ worth of units have been sold annually, with everyone convinced of the virtual reality of the ultra-efficiency of the systems.

A development of seismic proportions took place, when the ASHRAE headquarters, in Atlanta, Georgia, in the United States, installed a ground-source heat pump for one floor and a VRF for another floor and conducted extensive field measurement for a period of two years. ASHRAE presented the findings through its journal (September and December 2014 issues), and they were damning in nature.

Atlanta has summer design temperature of 34 degrees C and winter design of -6 degrees C. The units’ seasonal (nine-month) performance was 1.41 kW/tonne in Atlanta weather conditions. Considering the GCC weather profile of the low forties, this would translate to 1.8 kW/tonne, or higher, which is a rough estimate from my side, following the compressor lift proportion. The news is disastrous for the VRF, or VRV, technology and imposes the need for a serious review by the industry and an equally serious response from the manufacturers.

Alarmed by the brazen disregard by the VRF industry to multiple requests for validated field data, I undertook an exercise of monitoring the performance of a VRF system in the UAE and reached a conclusion similar to ASHRAE that VRFs consume around five per cent higher power per square metre than ducted splits, for the same international brand. For the record, the two units (the VRF and the ducted split) were installed in two residences (a villa and a townhouse) in Dubai. 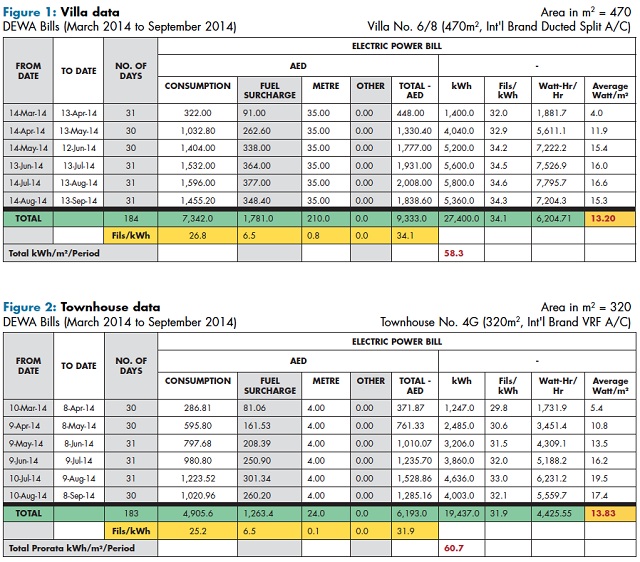 I am of the strong view that the technology is evolving to use the same components with a small variation. The industry is moving towards a variable water flow (VWF) system that includes a brazed heat exchanger and a water pump, in order to pump chilled water to the same indoor units that will use chilled water coils in lieu of a DX coil.

The new system will resolve two issues at one go. The refrigerant will be contained in the outdoor condensing unit, and the chilled water will allow ease of monitoring the performance from one side and also allow for larger pipes, which can be flushed and cleaned prior to final usage.

The VWF system has already been developed in Europe and Japan and will soon be marketed in the GCC market.

An improvement to the system would be to deploy the water-cooled regime through a cooling tower or geothermal energy. Indeed, a ground-source geothermal VWF system can reduce power consumption to a range of 0.7 to 0.9 kW/tonne, further improving efficiency. Towards utopia!

George Berbari is the CEO of DC PRO Engineering. He can be contacted at gberbari@dcproeng.com