The Dubai Chamber of Commerce and Industry has announced receiving LEED Platinum – the highest possible rating. Calling it another first in the Arab world, the announcement highlighted that the Chamber had also achieved the basic level LEED as the first existing building in the region in 2009. 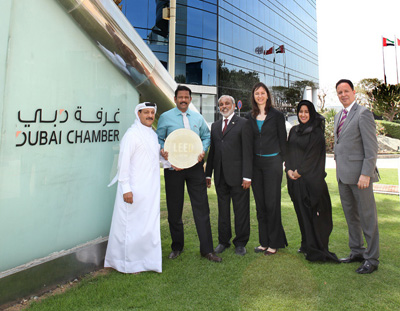 Giving further details, the Chamber said that earlier, it was certified LEED pre-renovation to demonstrate that existing buildings could be greened without major investments, and that soon after its renovation, which was necessary to upgrade the building’s systems and fittings after 15 years of operation, it achieved LEED platinum, the highest level of the US Green Building Council’s globally recognised standard.

The Chamber claimed that it succeeded in reducing energy and potable water consumption per person by 63% and 92% respectively, accumulating an estimated USD 5.8 million of savings between 1998 and 2013. While the majority of these gains, said the Chamber, came from simple low-cost initiatives, such as turning off the air conditioning and lighting after hours, a number of innovative practices with attractive payback periods were also applied, which included using recycled water for landscaping and washroom flushing, using the outdoor fountain as a heat exchanger to cool the server room, and capturing condensate for the fountain and washroom systems.

Such initiatives, the Chamber pointed out, led it to receive an energy star rating of 91%, implying that it is more energy efficient than 91% of comparable buildings in the United States.

HE Hamad Buamim, President and CEO, Dubai Chamber, pointing out that this global honour came after many years of hard work, said, “This achievement reaffirms the Chamber’s commitment towards sustainability and being a role model for the business community.”

He also underscored that this was in line with the strategic vision of the Dubai Government, which emphasises the adoption of sustainable practices through green buildings and other measures.