The compressor market – a paradigm shift

by CCME Content Team
Share on FacebookShare on Twitter
Based on Frost & Sullivan’s research on PD and centrifugal compressors, Virein Kumar Yadlapalli envisages a tilt towards the non-oil and gas segment, which he predicts, will boost the demand for compressors.

Based on Frost & Sullivan’s research on PD and centrifugal compressors, Virein Kumar Yadlapalli envisages a tilt towards the non-oil and gas segment, which he predicts, will boost the demand for compressors.

Based on Frost & Sullivan’s research on PD and centrifugal compressors, Virein Kumar Yadlapalli envisages a tilt towards the non-oil and gas segment, which he predicts, will boost the demand for compressors.

The Middle East and North Africa (MENA) features amongst the fastest growing regions with the oil and gas industry being the key contributor to its development. The local governments’ unified vision towards industrial diversification beyond traditional limits and foray into non-oil and gas sectors has been paying rich dividends. Manufacturing and extended downstream activities have been continuously invested into, to ensure sustenance of the growth path.

Economic growth coupled with an increasing population has resulted in significant investment in power and industrial infrastructure. While the region has been largely stable, the recent issues arising out of sectarian divides (and in certain cases political issues) have had an impact on the growth, albeit minimal.

Demand for equipment is a natural consequence of industrial growth. Rotating equipment, a critical machinery of any industrial setup, of which compressors is an essential part, continues to witness installations in the region. As per Frost & Sullivan estimates, 2013 revenue for the compressors market in MENA was more than USD 1,700 million, and the same has grown at a healthy rate (more than 7.0 per cent).

Frost & Sullivan’s research on PD (including reciprocating and rotary screw compressors) and centrifugal compressors market suggests that a paradigm shift is likely to take place, with the emergence of the non-oil and gas segment as a primary demand driver. 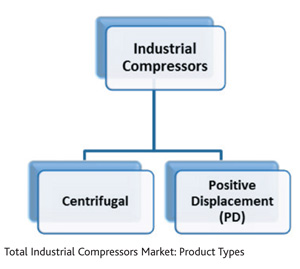 As is the case globally, major multi-national corporations, like General Electric (GE), Siemens, Atlas Copco, Elliott Group and Dresser-Rand dominate the MENA market. These companies have engineered portfolios (product/solution) suited to the local requirements, and their presence in MENA spans across pre-sales and sales support, marketing, and comprehensive after-sales support. Also, in more recent times, the otherwise dominant American and European vendors have witnessed high competition from Asian vendors. This trend is attributed to increasing penetration of Asian (mainly Korean) Engineering, Procurement and Construction (EPC) contractors facilitating greater acceptance of compressors from their respective countries.

Of late, there is a surge in investments/plans targeting manufacturing/assembly operations in the region, capitalising on the advantages (during project tenders) offered to companies with local value-add and conforming to the localisation requirements. 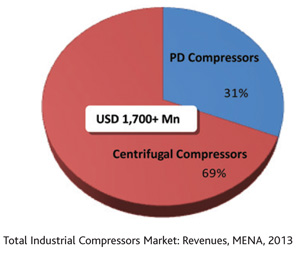 Being one of the biggest markets in the Gulf Co-operation Council (the GCC), the Kingdom of Saudi Arabia (KSA) continues to attract various compressor manufacturers. It even encourages suppliers to set up local manufacturing or assembly facilities in order to tap into this market. Due to the sheer size of the economy, diversified nature of industrial projects, and a stable business environment, the demand for compressors is likely to stay healthy.

While demand from the United Arab Emirates is likely to be sustained, Qatar and Kuwait remain markets with massive potential, which may or may not be realised in the near future. State policies on various aspects of the oil and gas industry are the main reasons for tempered market growth in these countries.

Resolving issues pertinent to global sanctions, political uncertainties and the sectarian crises experienced by countries, such as Iran, Iraq, Egypt and Libya, which otherwise offer a huge potential, will be key in determining the progress of these economies. The demand for compressors will be commensurate with the investments being realised.

In spite of the flagging number of large-scale Greenfield projects (especially in the past five to six years) in the oil and gas industry, demand from this segment is likely to dominate market revenue.

Massive investments in the power and water segment are expected to translate into the segment which will emerge as the second biggest source for compressor installations in the next four to five years. Also, the continued expansion (current and envisaged) of petrochemicals, chemicals and fertilisers segments is expected to result in significant demand for compressors.

Additionally, there is a huge after-sales opportunity offered by the large installed bases commissioned over decades. Exacting the requirements of compressors, which thereby raise the overall cost through certifications, safety features, instrumentation requirements, diagnostics/monitoring, etc., largely contribute to the revenues. 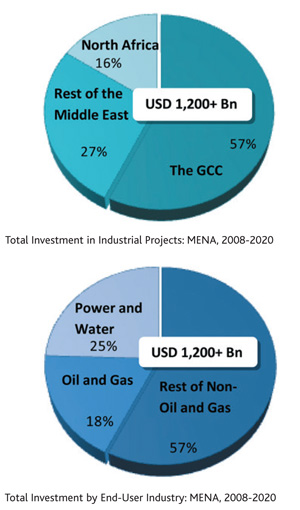 The replacement market is expected to be a substantial driver for the rotating equipment industry as old equipment undergoes overhaul, retrofits, part replacements or complete substitution with improved technology. This will be a common feature.

Escalating energy requirements have resulted in investment in gas-fired plants that need compressors. Growth in non-oil and gas-based projects, such as petrochemicals, power, desalination, water and wastewater, infrastructure and metals and mining will increase the overall demand for compressors, and moderately reduce the dependence of compressor demand on any specific industry.

Also, the non-oil and gas segment presents significant opportunities for the installation of non-American Petroleum Institute- (API) certified compressors. This should particularly benefit compressor manufacturers with a limited range of API-certified compressors in their product portfolios.

It is worthwhile to note that the demand for compressors may witness marginal reduction due to moderation in MENA investments, significant build-up of regional overcapacity, discovery of major oil and gas sources in other countries (major gas finds in the United States, investment in shale gas, deep-sea oil production, and others), as well as the growing impetus world over to develop renewable energy sources. Also, countries in the region are in a state of political uncertainty and unhealthy contagion. Political tensions, global sanctions on Iran, economic imbalance in Iraq and the effects of the Arab Spring in Bahrain, Jordan and Lebanon, among others, have dampened investor sentiments.

Volatility in the global market for oil and gas will have an impact on the compressors market in the short term. The need for a stable source of oil revenue (in the face of depleting/ageing fields), creating value-added products (through increased downstream activities), alleviating unemployment and economic disparity and the need for economic diversification will be instrumental in fuelling industrial growth. Hence, investments targeted at extending the downstream activity and continued industrial diversification will be vital for sustaining the region’s growth.

The outlook for PD and centrifugal compressors market is optimistic, with a moderate growth rate of around 7.0-8.5 per cent from 2014 to 2017. Untapped potential for downstream activity in countries, such as the UAE, Kuwait, Qatar and Iraq, provides opportunities for growth. Additionally, new cities, growing population, increasing industrialisation and international mega events will provide the next industrial boom for the compressors market.