by CCME Content Team
Share on FacebookShare on Twitter
Pointing out that there is a lot of debate about new air treatment systems vis-à-vis IEQ and safety, Dr Connie Araps evaluates them based on empirical data to clear the air.

Pointing out that there is a lot of debate about new air treatment systems vis-à-vis IEQ and safety, Dr Connie Araps evaluates them based on empirical data to clear the air.

Increasing energy efficiency can reduce Indoor Environmental Quality (IEQ) and safety, as volatile chemicals and pathogens accumulate to levels two to five times higher than outdoors.1 In this regard, new types of air treatment systems can improve air quality and safety.

There are only so many ways to “clean” the air of particles and volatile organic chemicals (VOC), bacteria, virus and mould.

Older systems used filters, adsorption, ozone, ionisation and photocatalytic adsorption to remove particulates, deodorise and sanitise. Advanced analytical methods have now enabled an objective assessment of the capabilities and limitations of these systems and found that they are not effective for treating large, occupied spaces.2, 3, 4, 5, 6, 7 The newest systems use UV light to generate nature’s most effective and safe cleaning agent – the hydroxyl radical oxidant – to sanitise even large residential and commercial spaces.6, 7 They restore nature’s balance indoors by decomposing volatile organic compounds and destroying bacteria, viruses and mould in the air and on surfaces. There has been a lot of hype about these new systems. This article focuses on data to put the debates to rest.

Filtration and adsorption remove particulates and low part per billion (ppb) levels of VOC, but cannot mitigate higher levels of VOC. Mesh filters remove particles larger than 10 microns, but 90% of all airborne particles are smaller and require HEPA filtration, which removes 99.97% of particles above 0.3 microns.

Low-energy “ionisers” generate positive and negatively charged particulates which clump together to improve filtration. They can also be trapping on charged collection plates. Filters, adsorbents and collection plates must, therefore, be changed frequently to maintain efficiency and prevent bacterial and viral contamination.

Ozone, a natural oxidant, decomposes some types of VOC and kills bacteria, viruses and mould. However, ozone reacts very slowly, so high concentrations are required to be effective. The electric arc method used for generation results in ozone formation rates of six-12 g/hour or ~500-1000 ppb/min. That is much higher than the safety limits set by OSHA and other international safety and health agencies of 50-100 ppb for an eight-hour exposure.9 Therefore, these systems can only be used in unoccupied spaces, as there are practical limitations on use, since ozone bleaches dyes in textiles and artwork and causes damage to fabric, paper, latex, leather, and electronics.

NTP generators are air ionisers based on the Siemens ozoniser that use electric discharge to generate a mixture of high-energy electrons (3-6 eV) and other particles called a non-thermal plasma.4, 5 The plasma particles react with oxygen and water in air to form ozone and other reactive oxygen species which oxidise and decompose VOC and kill microorganisms. It is claimed that hydroxyl radicals are formed, but there is no data to support this.

Because NTP systems use an electric arc, they generate ozone well above 100 ppb and are not suitable for extended use in occupied spaces. They also generate a complex mixture of oxidised organic byproducts that could represent a health hazard.8, 4, 5 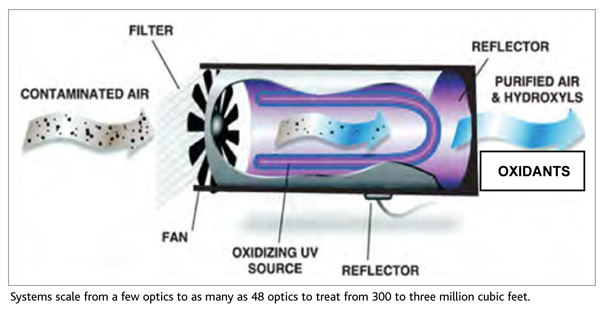 PCO systems purify air using a photosensitive semiconducting catalyst like titanium dioxide that adsorbs VOC and microorganisms. The catalyst is irradiated and activated by 254-315 nm UV light, enabling the formation of oxidants presumed to be superoxide (O2-) and hydroxyl radicals at the surface, where they immediately react with bound VOC and microorganisms.1, 2 No ozone is formed at those UV wavelengths. PCO systems do not generate sufficient oxidants to circulate throughout the treatment space. Multiple catalysts can be used, although the benefits of doing so are not quantified. “Photo hydro ionisation” is a trade name for a PCO system that uses a four-part catalyst.

PCO systems were developed to treat small volumes and low ppb levels of VOC and were used by NASA on the space shuttle. However, they have limitations.1, 2

In nature, the sun’s UV radiation strips water molecules of a hydrogen atom, creating over two million hydroxyl radicals (HO·) in each cubic centimetre of air.

Hydroxyls power the atmospheric cleansing and sanitising cycle. They react in 20-60 milliseconds with VOC and initiate a series of fast, free radical chains reactions that continuously decompose VOC and their byproducts, keeping air safe to breath.6, 7 They kill bacteria, viruses and mould by reacting with the lipids and proteins in their thin, delicate cell wall causing lysing. Low ppb steady state levels of ozone are formed since the UV light creates ozone at one wavelength and decomposes it at another. The presence of some ozone plays a role in the natural air cleansing process, as it rapidly decomposes terpenes and isoprene generated by plants, humans and outgassing manufactured wood products, cleaning products and textiles. When it does so, it produces more hydroxyls. Humans, animals and plants have evolved symbiotically to tolerate these natural levels of hydroxyls and their byproducts.

Hydroxyls don’t exist naturally indoors. They react so fast that they are consumed near air entry points. Hydroxyl air purification systems irradiate the water vapour and other gases in air as they are circulated air through chambers equipped with quartz optics, generating the same distribution of hydroxyls and other oxygen species formed in nature.

The hydroxyls and oxygen species react with and decompose mid to high ppb levels of VOC and kill a broad range of bacteria, viruses and mould. Systems scale from a few optics to as many as 48 optics to treat from 300 to three million cubic feet. They are portable or can be integrated into heating, ventilation and air conditioning systems. Large systems can process high ppm levels of VOC.

Hydroxyls oxidise and decompose VOC by a series of free radical chain reactions which are very fast and efficient – thousands of times faster than ionic reactions that characterise ionisation and plasma systems and a million times faster than ozone. The cascade of secondary oxidants formed is more stable, and circulate throughout the treatment area to complete the purification process. Oxidant and byproduct concentrations are diluted to the safe levels found in nature, which range from 10-40 ppb. These systems should run continuously to recirculate byproducts through the photolysis chamber until they are fully oxidised – a process which “clips” off carbon atoms one at a time, forming carbon dioxide and water. Smaller VOCs react faster, so oxidation byproducts like formaldehyde or acetaldehyde don’t accumulate.

Vendors should provide operational use guidelines indicating which models are designed for various sized spaces. System designs vary among vendors, resulting in different formation rates for hydroxyls, secondary oxidants and oxidation byproducts. Treatment spaces should be normally ventilated (1-5 exchange rates/hour) to maintain safe oxidant levels. Some vendors have conducted third-party laboratory testing and can provide you with data to corroborate claims. It is important to request this data, as claims abound and data is scarce.

Measuring hydroxyls requires specialised equipment like ultra-clean rooms and gas chromatograph-mass spectrometers. It is not possible to measure hydroxyls in a typical chemical laboratory; so ask to see the experimental design and the data, not just the conclusions.

Most international agencies and the US FDA do not regulate or require premarket approval for ultraviolet air purifying devices, since they sanitise in a manner similar to that found in nature and produce the same oxidants and byproducts. They do require pre-market approval of devices intended for use as a medical device or in a medical facility. Although it is not required, some vendors have conducted toxicology studies to evaluate safety. You should ask vendors to provide regulatory and safety data. Each vendor must have their own data and approvals, as device design, active and passive components and performance specifications affect efficacy and safety.

The writer is President, Prometheus Strategies, Inc. She can be contacted at caraps@ bellsouth.net