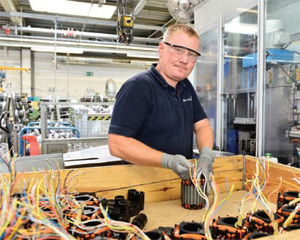 Giving details, Ziehl-Abegg said that its revenue increased by five per cent and totalled a record EUR 388 million. Business in Asia was looking particularly good, with investments reaching EUR 41.4 million for the first time in the company’s history. This, said the company, was founded largely on the establishment of a new site in Hohenlohe in southern Germany, for the drive systems technology division.

In 2014, it is expecting high, single-digit growth rates, thanks to incoming orders, which were already 10% above last year’s rate, the company claimed.

“The market is responding very well to our low-noise, energy-saving products”, said CEO Peter Fenkl, and credited this to its fan and drive technology and to the awards from the German Federal Environment Agency and various environmental ministries.

Observing that the company’s worldwide production network was continuing to grow, with its sites in Asia, the Americas and Australia being continuously enhanced to provide local assembly and production facilities, CTO Norbert Schuster informed that revenue development in Asia had been considerably better than expected.