Why temporary cooling towers in the Middle East?

by CCME Content Team
Share on FacebookShare on Twitter
Arguing that cooling towers are prone to troubles that can throw an entire plant into turmoil, or worse, shut it down altogether, Daniel B Coday lists the benefits of temporary cooling towers and makes a case for them in the region.

Arguing that cooling towers are prone to troubles that can throw an entire plant into turmoil, or worse, shut it down altogether, Daniel B Coday lists the benefits of temporary cooling towers and makes a case for them in the region. 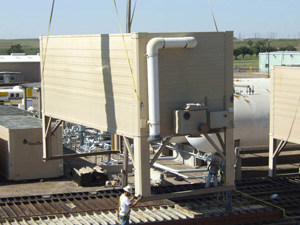 The thermal performance and capacity of an evaporative cooling tower tends to decrease over time. At the same time, a plant’s need for colder water tends to grow. Couple these factors with today’s stringent capital constraints and the challenge of expanding an existing cooling tower’s footprint, and one quickly sees why industrial plants of all shapes and sizes limp along for years with insufficient cold water, especially during high-demand times and during the hot summer months. It is a rare thing indeed to find an industrial plant that doesn’t need more cold water than its existing towers can supply.

Catastrophic failure afflicts more cooling towers than is commonly known. Several factors contribute to failure. Towers containing corrosive materials fail decisively at the most inconvenient moments, especially when they are located near the ocean and at low latitudes, where salt and ultraviolet light wreak havoc. Collapse comes at the hand of a strong wind, or fire, earthquake, poor maintenance, and, in extreme northern climates, when ice accumulates in the fill media and air inlet louvres. When a cooling tower comes down, some or all of the plant that it serves also comes down. Catastrophe visits to cooling towers more than most other industrial equipment. 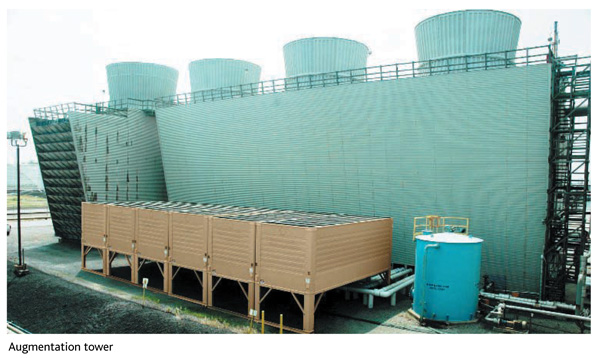 Many large processes use once-through cooling using water from lakes, rivers or oceans to cool their process before returning warm water to the lake, river or ocean. The resulting algae blooms pose a grave threat to the natural ecosystem and aquatic life. Environmental agencies are imposing ever stricter regulations on discharge temperatures. A temporary cooling tower helps ensure that the process is able to run at capacity year-round by cooling the process water before it flows back into the lake, river or ocean. 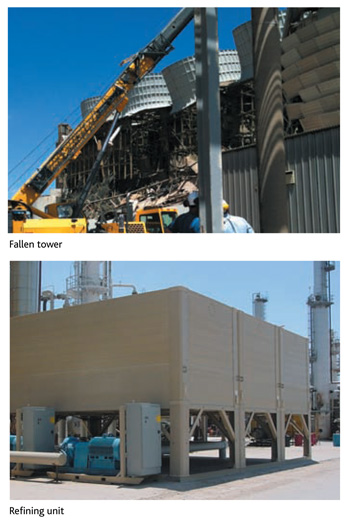 Compensating for a lack of cap-ex funding:

A new permanent cooling tower requires a capital expenditure that can be difficult, if not impossible, to obtain, especially on short notice. Temporary cooling towers are an expense of the O&M budget and, as such, can sometimes enable a plant to avoid an exhaustive cap-ex approval process.

A case for cooling towers in the region

Despite an ever-growing base of large, already impaired, permanent cooling towers serving life sustaining and other critical operations in coastal regions throughout the Middle East, there are very few temporary cooling towers available in the region. By contrast, North America has more than one million TR of temporary cooling towers, all of which experience heavy utilisation, with many deployed on a year-round or multi-year basis.