Going beyond the surface

by CCME Content Team
Share on FacebookShare on Twitter
An accelerated growth in the region’s construction sector has benefi ted the paints and coatings industry, which, in turn, has seen major developments to combat challenges posed by Volatile Organic Compounds. Maniza Dewan and Roshni Jacob discuss the new advancements in the segment.

An accelerated growth in the region’s construction sector has benefi ted the paints and coatings industry, which, in turn, has seen major developments to combat challenges posed by Volatile Organic Compounds. Maniza Dewan and Roshni Jacob discuss the new advancements in the segment.

The GCC region has been seeing an increase in activities across various industries, particularly the construction industry, with countries, such as Saudi Arabia, the United Arab Emirates and Qatar, embarking on massive infrastructure plans. This, in turn, has prompted a wide range of specialised products to meet the market’s demands. The paints sector is one of them.

Paints and coatings in the GCC

The total market size of the paints and coatings industry in the GCC region for 2012 was estimated at USD 2.26 billion and, according to market sources, is expected to grow to USD 3.16 billion by 2017, at a compound annual rate of 5.8%.

The GCC region is among the largest manufacturers and consumers of paints and coatings in the world, with Saudi Arabia and the UAE accounting for over 70% of the paint sales within the region, as shown in Figure 2.

Key market drivers in the region

As mentioned earlier, the basic demand for paints comes from the large infrastructure spending of various governments in the region. With the planned outlay being in billions of dollars, the demand for paints has been steadily rising. The key market drivers are as follows:

1. Abu Dhabi has some of the largest projects under way, such as Capital District, Al Reem Island, Yas Island development, Masdar City and Saadiyat Island.

4. Qatar is going to be one of the leading spenders in infrastructure, as it is gearing up for the 2020 World Cup. Major projects in the state are the Qatar national railway system, New Doha International Airport and New Doha port.

5. Oman, too, is spending on expansion and setting up of ports, which include Sohar Airport, Muscat Airport and Salalah Port.

The region’s harsh weather has added numerous challenges for the paint and coatings manufacturers, as the products need to be able to withstand the environment and other conditions that the region presents. Due to these factors, even residential projects require paints and coatings that have specialised features, such as heat shielding and weather resistance. Two major developments in the paints and coatings industry have been low-volatile organic compound (VOC) paints and heat rejection paints.

It has been noted that the market is moving towards products with minimal volatile organic compounds (VOC) content, as people are becoming increasingly aware of the health hazards behind paints and coatings and of the advantages of using “greener” products. VOC products are those that contain unstable, carbon-containing compounds that readily vaporise into the air. This implies that as paint dries, VOCs are released into the air at high levels. Upon vaporisation, these compounds react with the other elements that produce ozone that leads to air pollution and a multitude of health issues, such as breathing problems, burning and watery eyes and nausea. In fact, certain VOCs have been linked to cancer and even kidney and liver damage. 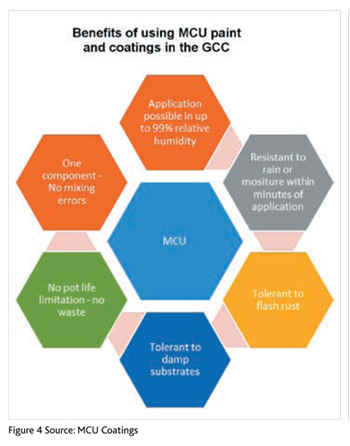 Indoor VOC levels are estimated to be 10 times higher than the outdoor levels. VOC levels are at the highest during and soon after the first painting. And they continue to leak out harmful gases for several years.

Paint manufacturers are being challenged to create products that minimise the risks to health and to the environment, without compromising quality and performance and keeping up with environmental regulations and trends. Low-VOC and zero-VOC paints have been introduced to the market, with lower VOC paints preserving both indoor and outdoor air quality. Furthermore, they reduce the incidence of eye or respiratory irritation from exposure to VOC fumes.

Heat rejection is critical for paints that are used in the region, given the harsh summers that are experienced here. A paint or coating that has heat rejection qualities is one that uses a technology where a broad-spectrum thermally reflective coating is applied to certain type of microspheres, in order to block heat radiation. This helps dissipate the heat.

The ability to block or reflect heat from any source, such as heaters or radiators in buildings to pipes and vehicles outdoor, are the qualities of a good heat rejecter. Heat rejection paints and coatings have been known to extend the lifespan of the products they are applied on by cooling down materials that heat up during normal operations, and also aid in the protection of life and property by lowering high temperatures that are reached by industrial equipment and other machinery.

A case for MCU paints

One can make a compelling case for Moisture Cure Urethane (MCU) paints. MCU is a single component polyurea coating technology that has a long cycle compared to its competitors in the market. It is an effective and economical solution for nearly every construction need in which steel is the substrate material.

MCU can be applied irrespective of the weather conditions (ie, temperature, humidity and dew point), and shows resistance to UV radiation, which is a plus point in the Middle East, as it provides long-term durability and dries quickly in comparison to its competitors. Another added advantage of using MCU is that, while using other paints, a minimum of 20 coats would be required. With MCU, however, three to four coats suffice, thus reducing wastage and guaranteeing faster project completion. Furthermore, MCU can be used in a variety of industries prominent in the Middle East, as shown in figure 5.

It is evident that MCU offers many advantages to the contractor and the project owner in terms of time and money. Projects no longer need to be shut down due to weather constraints, as MCU can withstand humidity, heat, cold and rain. As much as 35% of the overall time can be cut when using MCU.

MCU paints are currently being introduced into the GCC markets, with Bahrain being the lead user. There are tests being conducted by large organisations in Saudi Arabia, Kuwait and Qatar. As MCU requires only three to four different one-component products and one thinner to protect the entire structure, it is easy to stock and apply it with the fewer potential errors. MCU has, therefore, generated tremendous interest in the industry.