On completion, the network will deliver 300,000 TR in the area

Empower has announced that 70% of the first phase of its Business Bay facilities has been constructed, and that the first phase of the project will begin operations in May, after the Treated Sewage Effluent (TSE) network is up and running. Construction progress on the facility includes the completion of the plant structure, electrical transformer structures and chiller systems, the announcement added. 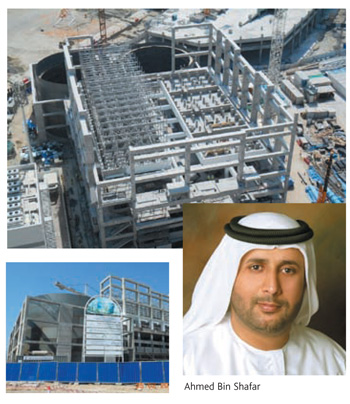 The Business Bay plant is notable for being the first District Cooling facility to implement the Dubai Executive Council’s guidelines on environmental sustainability, Empower claimed.

In this context of the project’s progress, Ahmad Bin Shafar, the CEO of Empower, said: “The Business Bay District Cooling plants are major projects for Empower, and we predict that this network will be a significant revenue source for the company, as the development evolves into Dubai’s most vibrant community, comprising commercial, retail and residential spaces. The Business Bay network also widens the scope of Empower’s services to include a portfolio of developments across Sheikh Zayed Road and Al Khail Road.”

Highlighting that the new Business Bay plant will be the second of a larger network in the area, Bin Shafar revealed that the company was planning to build additional facilities in phases over the next few years. “On completion, the Empower network will deliver 300,000 TR in the area,” Bin Shafar said. “The upcoming plants are also being designed and implemented as per green building codes and will be LEED certified.”