District cooling: A market poised for strong growth in the Kingdom of Saudi Arabia

by CCME Content Team
Share on FacebookShare on Twitter
Innovative technologies and construction boom will drive the District Cooling market in the Kingdom, says a Frost & Sullivan report.

Innovative technologies and construction boom will drive the District Cooling market in the Kingdom, says a Frost & Sullivan report.

Globally, the movement of countries towards sustainability and “Green Technologies” is picking up pace. The Middle East has also joined this movement and is trying to “go green” in all possible ways. An extremely high temperature prevalent in the region makes air conditioning a necessity and has a major share of the total electrical consumption over other electrical needs. District cooling technology is handy, as it effectively offers central cooling for multiple buildings, while saving about 25% on electrical costs.

District cooling (DC) is a system where chilled water from a central location is distributed to buildings through a set of insulated pipes. The water, then, circulates through refrigeration coils or, by the use of absorption technology, enters the air conditioning system. The DC solution efficiently controls the internal temperature in buildings, produces less noise, is easy to maintain, and, most importantly, consumes less power, when compared to other cooling technologies. With the use of eco-friendly refrigerants, carbon emissions in the environment can also be minimised. A comparison of electricity consumption by various cooling technologies is given in Figure 1.

District cooling market in the Kingdom of Saudi Arabia

With extreme high temperatures prevailing throughout the year, air conditioning is a necessity in the Kingdom of Saudi Arabia (KSA). During summer, air conditioning accounts for about 70% of the total electricity consumption. Therefore, identifying a cost-effective comfort cooling solution is an important part of urban planning in the KSA. Consumers have realised that DC offers the best cooling services at a relatively lower price, as compared to other cooling methods. 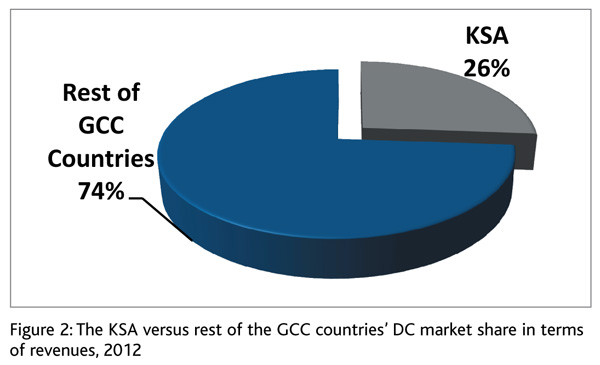 Figure 2 shows the DC revenues of the KSA, in contrast with the rest of the GCC countries. The KSA DC market earned about USD 400 million in 2012, which is about 26% of the total GCC DC revenues. The commercial and retail segments together contribute a major share of the revenues. However, this scenario is likely to change, as new application areas and end-user segments like residential, hospitality, infrastructure, among others, are likely to adopt DC for comfort cooling applications.

Due to its extremely hot climate, high population growth, and increasing investment in commercial and residential development, the demand for air conditioning will increase, with a rise in demand for DC, as well.

With the pressure on the electricity grid increasing and the cost of electricity rising, demand will increase for an efficient cooling solution, which will consume less power and is environment-friendly. This will drive the market for DC services.

The DC market calls for greater regulations to be enforced by government authorities in the KSA (similar to the ones in the UAE), so as to promote the use of energy-efficient, environment-friendly, and economical cooling solutions.

Against the backdrop of the global credit crunch, the high capital cost required for DC poses a major challenge, especially to the small and medium-scale DC service providers. To overcome this, many developers and service providers are now using the alternative option of Public Private Partnerships (PPP) and Built-Own-Operate- Transfer (BOOT) model.

The market also faces the issue of losing customer confidence regarding non-transparent and higher charges due to inconsistencies in the billing system. Educating customers about the tariff structure and installing smart meters at customer premises will measure the exact usage and ensure transparency in billing.

Due to limited availability, fresh water is considered a precious resource in the KSA; this poses a risk for DC applications. However, with advancement of technology, treated sewage water or seawater is being used in pilot projects for DC applications. With its success in such projects at Jubail Industrial City and Jeddah Airport, Bay La Sun Village and the residential development of King Abdullah Economic City have planned to use seawater extracted through beach wells in their DC plants. However, treating seawater for use in DC would incur additional costs for companies and, thus, might increase the price for end-users.

The current crackdown on illegal immigrants by the Government of Saudi Arabia to implement Saudiisation has impacted the construction and contracting industries, as they were largely reliant on daily wages labour. Thus, the availability of a semi-skilled and unskilled workforce will fall, and service providers will have to hire local workforce or people with legal immigration status. This will adversely affect labour costs and have a direct impact on the bottom line of the DC service providers.

Rising electricity demand, increasing costs and the announcements of mega infrastructure projects will drive the growth of the DC market in the Kingdom. This demand will arise from important cities like Riyadh, Jeddah, Dammam, and Mecca. In Mecca, with rising construction activity and growing awareness about sustainability, the penetration of DC applications will improve. With the implementation of innovative technologies like plant control to monitor and supervise central plant operations, smart metering, and seawater sourcing to achieve increased plant efficiency, the DC market in KSA is poised for growth.

Also, with the efforts by the Government of the Kingdom to move towards sustainability and curb energy consumption, DC will become a preferred choice for cooling needs. Companies with strong technical acumen, good relationship development skills, and innovative solutions for Saudi Arabia’s complex resource issues will benefit in the long run.