by CCME Content Team
Share on FacebookShare on Twitter
Postulating that the operational safety and efficiency of compressors can be significantly improved by using innovative and new technologies in their development and construction, Oliver Javerschek and Tobias Hieble demonstrate it through empirical and simulated results.

Postulating that the operational safety and efficiency of compressors can be significantly improved by using innovative and new technologies in their development and construction, Oliver Javerschek and Tobias Hieble demonstrate it through empirical and simulated results. 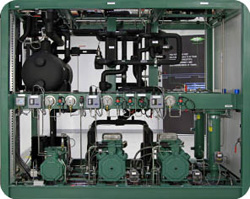 The operating conditions of a CO2 compressor in a combined booster refrigeration system are influenced by many factors. Besides the type of application, the system design (eg flash-gas bypass, open intermediate pressure vessel or flooded system) and the configuration (eg performance graduations, internal heat exchanger, oil management), different load and operating conditions have the greatest influence on the compressor operating status. From the point of view of a compressor manufacturer, it is important to ensure safe and reliable operation. The operational safety and efficiency of compressors can be influenced very much by the use of innovative, new technologies in their development and construction [1]. Furthermore, application-specific advice, training seminars and mathematical modelling in the planning phase can all give access to different ways of increasing operational safety. Autonomous systems incorporating sub-critical and trans-critical applications using CO2 as a refrigerant are used by BITZER at its Rottenburg site for practical training seminars. Different load and operating conditions are measured by using a booster system. This paper compares and discusses the measured and mathematically modelled results.

The structure of the booster system under discussion

The basic layout of this booster system comprises two compressors in the medium temperature (MT) stage, and one compressor in the low temperature (LT) stage. The two MT stage compressors are prototypes of the 4PTC 7K VARISPEED, and both have flange-mounted, suction-gas-cooled frequency inverter. The LT stage employs a 2MSL 07K compressor from the new SL series for sub-critical LT applications. To enable different gas cooler outlet temperatures to be simulated, the refrigerant mass flow is cooled or condensed in a water-cooled coaxial heat exchanger. The volume of cooling water that flows into this is regulated by a constantly controlled valve that is driven by the gas cooler outlet or condensing temperature in the cooling circuit. The HP expansion valve varies the refrigerant charge of the HP and LP sides. It is controlled by the high pressure and receiver pressure controller. The same controller also regulates the flash-gas bypass (FGB) valve. Downstream from the HP expansion valve is an intermediate pressure receiver with a FGB valve and two internal heat exchangers (IHE).

The liquid refrigerant from the receiver is subcooled by the internal heat exchangers in two stages against the FGB mass flow and LT suction gas mass flow. The second heat exchanger is designed primarily to keep the oil sump temperature high enough in the LT compressor. Aside from the LT freezer cabinet, another two evaporators are installed in a cold storage cell in the MT stage. The superheat at the outlet of the three evaporators is controlled by individual case controllers and electronic expansion devices featuring pulse width modulation. The booster system can be seen in the photograph, on the opposite page.

The opposite scenario, involving low suction gas temperatures, and therefore, low oil sump temperatures, carries with it the risk of “wet operation” in the compressors, as well as serious degassing effects of refrigerant solved in the lubricant at lubricating areas of the compressor. Insufficient suction gas temperatures are caused mainly by “cold” or even “wet” FGB mass flows, which can occur, for example, when there is a high load in the MT stage and a low load in the LT stage. Chilled cabinets that have either glass doors or are covered at night, and higher set points during nighttime operation can intensify this situation in supermarket refrigeration systems.

Furthermore, with CO2 applications, the comparatively steep increase in the relative cooling capacity of a CO2 compressor between the nominal design conditions and operation at low external heat sink temperatures should not be overlooked. A high number of start-stop cycles and rapid pressure reductions in the compressors’ crankcases should be avoided, especially when external temperatures are low, and with them the temperature of the discharge gas and oil [2, 3]. In addition to operation under different load conditions, different intermediate pressures in the MT stage will be considered as well. Finally, as mentioned in Section 2, the influence on the resulting suction gas temperatures in the system configuration must be taken into consideration.

The first scenario measured used conditions involving low MT and high LT loads. To accomplish this, the booster system ran with a 6 kW heating output in the MT stage and 3 kW in the LT stage. In the second scenario, the heating output was increased in the MT stage to 15 kW, while keeping the LT stage at the same level. These two sets of operating conditions therefore approximate to MT-to-LT load ratios of 2 to 1 and 5 to 1, respectively. With regard to the operation of the MT stage, in the 2 to 1 scenario, one compressor operated at 63 Hz, and in the 5 to 1 load ratio, two compressors operated at 58 Hz. The compressor in the LT stage ran at 50 Hz in each case. For selected operating conditions under which the load ratios were varied, the averages and absolute deviations of all the readings were measured and are listed in Table 1.

The calculated and balanced figures were used for both the total superheat and the discharge gas temperature. If one were to reduce the MT load to less than 2.5 kW while keeping the other conditions the same, then the maximum allowable discharge gas temperature at the compressors and at the coalescing oil separator used would be exceeded. This could be prevented by using an LT discharge gas desuperheater, which would reduce the thermal load on the oil, the filter cartridges in the oil separator, and the compressors.

The intermediate pressures were varied while the system was operating exclusively with an MT load, and with quasi-constant conditions on the HP and LP sides. The intermediate pressures were 32, 36 and 40 bar(a). Table 2 contains an overview of the selected operating conditions, the averages of the measured values, and their maximum absolute deviation.

An internal heat exchanger is almost essential in order to achieve sufficient suction gas temperatures, especially during pure MT operation, as in this scenario. A side effect of this is that the liquid refrigerant is subcooled, thus significantly reducing the risk of flash-gas formation caused by heat absorption and a reduction of pressure upstream of the electronic expansion valve. Flash-gas formation before the expansion device leads to a reduced expansion valve performance, and to a reduction in the quality of the superheat control. Furthermore, the suction gas can, in phases, come out of the evaporator both “wet” and excessively superheated. 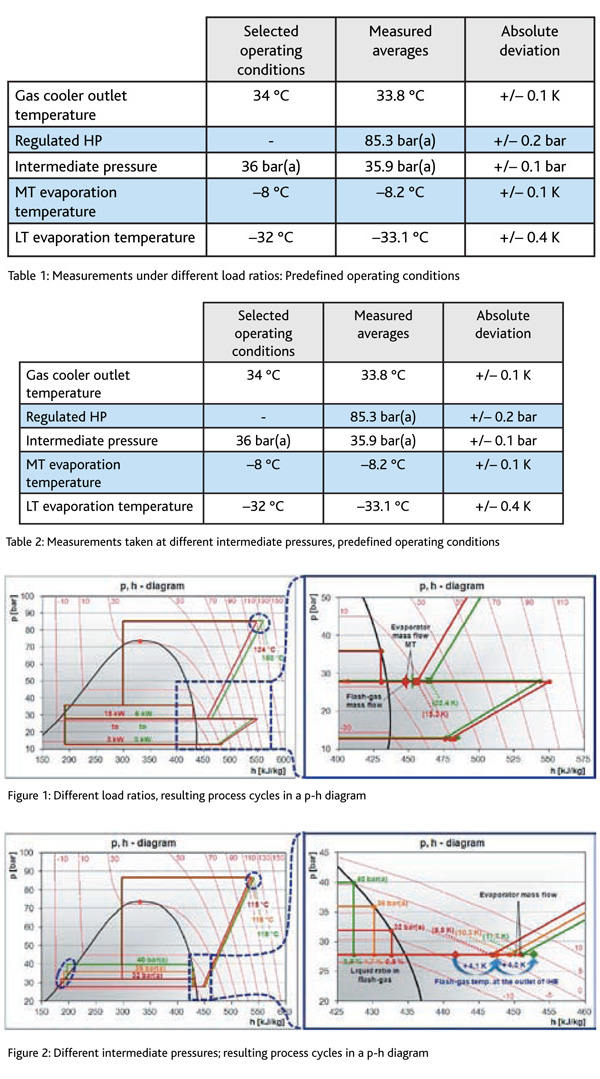 Because of the different enthalpy flows, operating conditions and load ratios have a decisive influence on the compressors, especially the MT compressors in a CO2 booster refrigeration system. By performing measurements on an actual booster system, this influence was recorded metrologically and compared with simulated results. This demonstrated that the measured figures correspond well with the calculated results, and that the expected results were achieved, both when varying the intermediate pressure and when varying the load ratios.

This indicates that cooling systems can be simulated, as early as in the planning stage, in order to identify necessary additional components such as internal heat exchangers, desuperheaters or other regulatory components to avoid potential operating difficulties. Furthermore, the choice of intermediate pressure has a major influence on the system’s operating safety and should be taken into consideration. One possible way of setting up a simulation, together with the most common ways of solving insufficient and excessive MT suction gas superheating has been published by the authors in article [3].

The writers work for Bitzer Kuehlmaschinenbau GmbH, Germany. They can be contacted at: Oliver.Javerschek@bitzer.de and Tobias.Hieble@bitzer.de