‘ARAMENA will be the voice of the HVACR industry’

by CCME Content Team
Share on FacebookShare on Twitter
Stephen R Yurek, the CEO of the Air-Conditioning, Heating and Refrigeration Institute (AHRI), spoke to B Surendar on the sidelines of the ARAMENA inauguration ceremony, on September 11 in Dubai ...

Stephen R Yurek, the CEO of the Air-Conditioning, Heating and Refrigeration Institute (AHRI), spoke to B Surendar on the sidelines of the ARAMENA inauguration ceremony, on September 11 in Dubai … 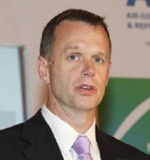 Considering we have an ASHRAE presence in the region through local chapters, what role would ARAMENA look to fulfill?

The primary purpose of ARAMENA is to bring together manufacturers in the region. ARAMENA will be the voice of the HVACR industry – a single voice that will meet with governments in the region. ASHRAE is a body of engineers, and yes ASHRAE has representatives of companies as members, but it is not involved in lobbying. ARAMENA will help identify areas for research and also raise funds for the purpose. It’s not to compete with the chapters but to coordinate efforts, if the need arises. We do have similar interests, but ARAMENA will be representing manufacturers at the regional level and the international level. For instance, the region has unique needs, and ARAMENA will get the message out to such bodies as the Montreal Protocol or the United Nations Framework Convention on Climate Change (UNFCCC).

One of the challenges in the region for manufacturers and other stakeholders is the wide range of standards, be they related to green buildings or fire safety. Would you look to address this issue?

You spoke about being the voice of the industry. What strategy do you have in place to engage the governments on a consistent basis?

We don’t have a strategy as of yet, but the group has to come up with one to talk to governments. We need to figure out how to work with governments in the region, and also in terms of adopting what the Saudis have and what ESMA has. There might be differences, but we are hoping the differences will be minor in nature.

The global economic crisis, if at all anything, has highlighted the cut-throat competition that exists among manufacturers. How do you see them working together?

That’s why we have ARAMENA. Manufacturers in the region realise they can get their message out as an industry instead of as individuals. The industry is maturing, and it needs control over all the products sold in the Middle East. To date, we have 13 manufacturers that have joined ARAMENA. The 13 represent an estimated 75-80% of the products sold in the region. You are always going to have those in the fringes, finding loopholes, but you will have people following regulations.

Are there any local manufacturers of HVACR equipment among the 13 members?

We don’t as of now, but I hope they apply. As the association gets more recognition and more of a voice in MENA, manufacturers are going to want to be on the table. At AHRI, we have built the membership base. Today, we represent 90% of all the manufacturers that sell products in North America. We have 310 members representing approximately 75% of all the products sold globally.