Emirates District Cooling (EMICOOL), has been awarded the Dubai Chamber Corporate Social Responsibility (CSR) Label, a standards certification instituted by the Centre for Responsible Business under the Dubai Chamber of Commerce and Industry (DCCI). Announcing this, EMICOOL said that the citation was received by Adib Moubadder, General Manager, EMICOOL, from His Excellency Hamad Buamim, Director General, DCCI, at a ceremony held recently. 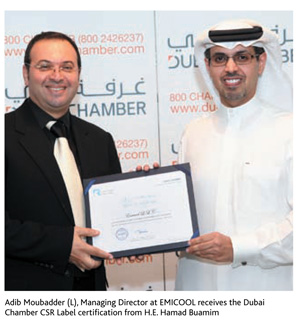 Established in 2010, the CSR Label acknowledges corporate entities for their progressive approach to four impact areas – the workplace, marketplace, community and environment, the announcement added.

EMICOOL claimed that it had consistently endeavoured to establish a sustainable system of operations across its divisions, and had partnered with entities to encourage community building and development, which included their sponsorship of Feelings 2012, a youth-based community initiative, and the Rashid Paediatric Therapy Centre, as well as actively sponsoring the Dubai Autism Centre.

On the environment front, it had endeavoured to reduce wastage and carbon emissions by using energy-efficient district cooling equipment and supported ongoing green initiatives, such as the Dubai Police Academy’s “One Million” trees project, EMICOOL revealed.

In this context, Moubadder said: “The commercial roadmap of Dubai is closely linked to the city’s ambition of setting a global example in sustainable and responsible living. Dubai Chamber’s extensive process of benchmarking corporates based on international standards encourages companies to align themselves with such goals for collective development. We are pleased to be recognised for our efforts in this respect, and hope to double our impact in the future.”

Speaking exclusively to Climate Control Middle East, Moubadder, commenting on what receiving the award meant for EMICCOL, said: “Receiving a prestigious award, such as the CSR label, is of utmost importance to EMICOOL. It reflects our unwavering commitment to operating our business responsibly through Corporate Social Responsibility (CSR) initiatives and practices we adhere to in our daily operation. Furthermore, acquiring the CSR label has improved our business stature and helped us in assessing our existing CSR initiatives that led us to devising strategic plans for the improvement of our policies and management practices parallel to the constructive recommendations we receive from the Dubai Chamber of Commerce and Industry.”