Breezair expands base in UAE

Breezair has announced winning a slew of major projects in a range of new application areas across the UAE, signalling its programme of regional expansion.

According to Breezair, its systems are exclusively distributed by ClimaGulf, which has been appointed the master distributor in the GCC region by Australia’s Seeley International, manufacturer of Breezair. As part of its regional growth strategy, ClimaGulf has reportedly forged an alliance with Muscat Electronics to promote the brand across the Sultanate of Oman. 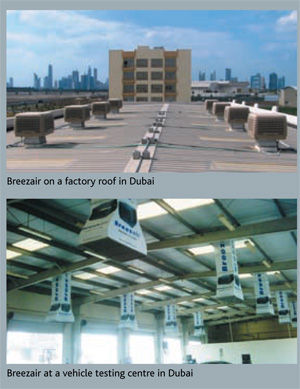 In this context, Sabu Abraham, Managing Director, ClimaGulf, forecasting exponential growth over the next five years in the region, claimed that his company aimed to be the market leader with 20% market share of the branded evaporative cooling systems in the entire GCC region.

Binod Pillai, General Manager, ClimaGulf, added, “Breezair’s entry into new sectors in the UAE represent a milestone for ClimaGulf, and reflects a recognition of air cooling systems being complementary to air conditioning and a viable option in the market.”