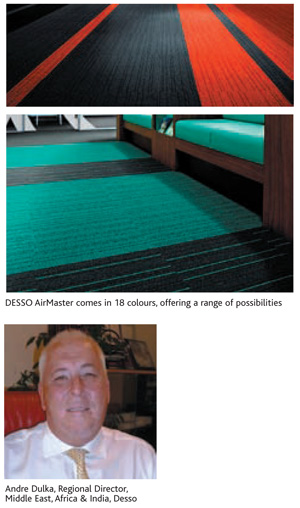 Desso puts forward the following statistical data to support its contention that the MENA region is prone to allergies: Firstly, according to a report by the World Allergy Organisation (WOA), the MENA region is home to an estimated 50 million asthma sufferers, which costs the regional health service and local economies an estimated USD 2.5 billion each year in direct medical costs, absenteeism from work and low productivity.

Secondly, the WOA has reported that the prevalence of asthma within the GCC is thought to be relatively high, particularly among children, with recent studies in the UAE showing that 20% already suffer from the disease. According to a global asthma prevalence study part of a World Health Survey (WHS), designed and implemented by the World Health Organization (WHO) in 2012, in Kuwait, 17% of the population is afflicted. In Saudi Arabia, numbers vary from region to region, ranging from 15% to 25% and in the UAE, 12% of adults also suffer from asthma.

In the light of this, Desso lists the following product features and advantages:

n AirMaster is able to capture and retain potentially harmful fine dust, lowering its concentration in the indoor air by as much as eight times, compared with hard floors, and four times lower than with standard carpet – based on tests performed by the German Test Institute (GUI), with Desso AirMaster versus standard PVC hard floor and versus standard structured loop pile carpet.

n The ribbed structure and the open spaces between the thick and fine yarns allow optimal air circulation and improved dust release.

Andre Dulka, Regional Director, Middle East, Africa & India, Desso, highlighted additional salient features of Desso carpets. Speaking to Climate Control Middle East, he pointed out that all Desso products were tested and adhered to the limit values for volatile organic compounds (VOCs) as defined by the Carpet Industry Association for Environmental Issue (GUT). He added that the same set of criteria was used by the US-based Carpet and Rug Institute (CRI), which launched its Green Label Plug testing and certification to indicate carpet and carpet backings that emit low VOCs. “All Desso’s business carpet products meet these criteria,” Dulka emphasised.

He also shared the information that, in the development of the company’s carpet tiles, Desso sought to use the healthiest chemical ingredients from a human health and environment point of view. This, he added, helped to reduce the problem of VOCs posing risks to people’s health.