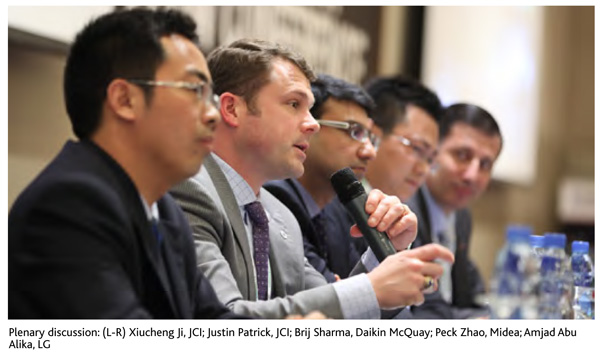 The first Annual Middle East Variable Refrigerant Flow Conference (VAR-Fair) was held on February 24 and 25 at Radisson Blu, Yas Island, Abu Dhabi. The conference, presented by CPI Industry, was attended by representatives from government bodies and agencies, the industry, the media, and academia from all over the world. The Fair served as an opportunity for speakers and participants to discuss trends, technologies, and relevant issues and concerns regarding variable refrigerant flow (VRF) systems.

In his keynote address, Mohammad Ahmad Al Mulla, Director, Metrology Department, Emirates Authority for Standardization and Metrology (ESMA), and the President of the Gulf Association for Metrology (GULFMET), highlighted the current programmes of ESMA relating to energy-efficient standards and to limiting the use of HCFC refrigerants, in accordance with the ongoing campaign of phasing-out refrigerants responsible for destroying the ozone layer.

Edwin Young, Programme Manager, Estidama, Abu Dhabi Urban Planning Council, elucidated Estidama’s policies and regulations. He also spoke about the entity’s standards in relation to VRF systems and made recommendations that could help encourage growth for the overall HVACR industry.

Dr Esam Elsarrag, Director, Gulf Organisation for Research and Development (GORD), introduced the agency, saying that its main focus was sustainability, improvement of well-being, conservation of resources, protection of the environment, and social and economic development. “Our aim is to create a sustainable built-environment that minimises ecological impact through the development of a sustainability rating system supported by a set of performance-based products,” said Elsarrag. 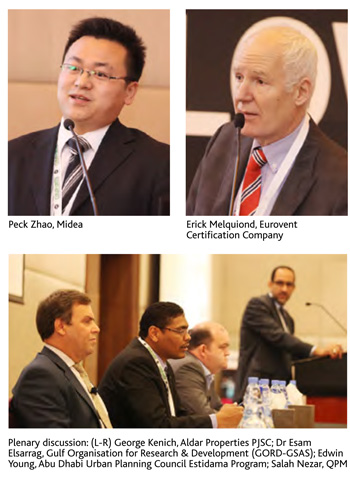 Highlighting the system’s energy-saving capabilities and flexibility of design and function, George Kenich, Head of Infrastructure and MEP, ALDAR Properties, spoke about the salient advantages of VRFs. He added that VRFs provided quiet operation, used less space in a facility, and could be managed through a centralised monitoring system. He also pointed out concerns over VRF systems, including higher installation costs and life cycle costs, the possibility of a refrigerant leak, and the general lack of awareness about the system. “Facilities managers and technicians are not familiar with the system,” said Kenich. “There also exist some uncertainties in operation and maintenance. So, contractor bids are a bit higher to manage the uncertainty.” He also attributed the higher life cycle cost to unknown maintenance issue and concerns about the system’s life expectancy.

Other speakers who made presentations during the first half of the event included Yaqoub Almatouq, a refrigerant expert from Kuwait, and Justin Patrick, Director for Channel Marketing and Strategy from Johnson Controls, Milwaukee.

A plenary discussion on coefficient of performance (COP), the status of testing and certification for VRF systems, the impact of the choice of refrigerants in VRF systems and the feasibility of earning Certified Emissions Reductions (CERs) in high-density real estate developments with VRF systems, ensued. The earlier speakers, as also Erick Melquiond, Managing Director of Eurovent Certification Company, took part in the discussion. B Surendar, Editorial Director and Associate Publisher, CPI Industry, then presented a new online platform for meeting and exchange of insights and information for the VRF stakeholder community, VARsity (www.var-sity.com).

Day One of the event concluded with technical presentations by representatives from Johnson Controls, Midea Commercial Air Conditioner, Daikin McQuay and LG Electronics.

The highlight of the second day of the conference was a cluster discussion, during which the participants were given an opportunity to exchange ideas, insights and perspectives about various key issues concerning the VRF industry. Based on the discussion, participants were asked to draft recommendations on a range of topics, including the formation of an association for VRF stakeholders, standardisation of codes and regulations for VRF system certification, information dissemination among VRF system manufacturers and training for installation and maintenance personnel. Below are a few of the key points: