Masdar has announced launching a pilot programme to test and develop advanced energy-efficient seawater desalination technologies suitable to be powered by renewable energy sources. The long-term goal of the programme is to implement renewable energy-powered desalination plants in the UAE and to have a facility at commercial scale by 2020, the announcement elaborated. 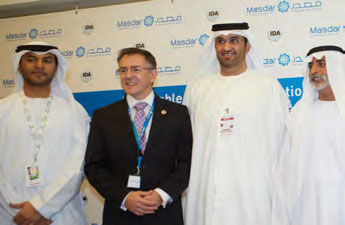 According to Masdar, the programme is reportedly a direct result of a call to action to improve water security made by H.H. General Sheikh Mohammed bin Zayed Al Nahyan, Crown Prince of Abu Dhabi and Deputy Supreme Commander of the UAE Armed Forces, which is envisaged to stimulate growth, promote investment and advance the desalination sector.

Working with technology partners and investors, the programme includes three test sites in the UAE and will operate for 3.5 years, Masdar said, and added that by pairing energy efficient desalination technologies with renewable energy, the programme aimed to reduce energy consumption and bridge the gap between promising desalination technologies, which are being developed in universities and research centres worldwide, and large-scale industrial applications powered by renewable energy.

Masdar said that it will coordinate the programme with key Abu Dhabi stakeholders, such as ADWEA, the Regulation and Supervision Bureau, the Environment Agency Abu Dhabi, and the Abu Dhabi Sewerage Services Company.

“The availability of potable water is one of the most pressing issues in the world, particularly in the Gulf region, where water production is a costly and energy-intensive process,” said Dr Sultan Ahmed Al Jaber, CEO of Masdar. “With the UAE’s growing economy and rising population, it is crucial that we identify a sustainable desalination solution to meet our long-term water needs. Connecting desalination technologies to renewable energy enables us to capitalise on our abundant resources, such as solar, as a solution to improve water security.”

H.E. Abdulla Saif Al Nuaimi informed that in parallel to its own efforts, ADWEA looked forward to wrking with Masdar on the development of desalination technologies with improved energy efficiency in line with its commitment to improving the sustainability of its operations.

Masdar highlighted that it would be issuing a Request for Proposals for Technological Development inviting industrial players to submit co-development proposals.