LED Lighting: Why it remains the undiscovered energy-saving solution

by CCME Content Team
Share on FacebookShare on Twitter
The lighting industry is facing the most notable transition since the introduction of electric light bulbs in the 19th century.

The lighting industry is facing the most notable transition since the introduction of electric light bulbs in the 19th century. This is due to the rapid emergence of LED lighting that is transforming the technological and competitive landscape. However, the uptake has been slow compared to other energy-saving initiatives that are employed to meet energy-targets. Here, James Chorlton discusses why many organisations are yet to reap the rewards of LED lighting.

Technological advances in LED lighting are happening at incredible speed. The technology is now permeating every area of our lives, from traffic lights and car headlights to laptop computers, but arguably with the most impact in commercial lighting.

Lighting represents an average of 21% of a building’s total energy consumption (Department of Energy and Climate Change, UK, July 2011) and accounts for 19% of global energy production. It is estimated to be responsible for around six per cent of global greenhouse gas emissions. 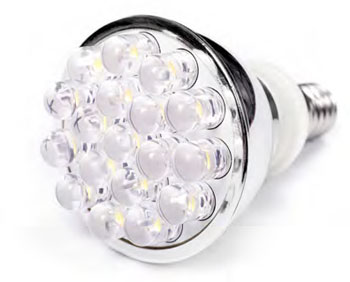 Traditional lighting systems emit around five per cent of light for 95% of heat energy, which, for a product aiming to produce light, does not fulfil even the most relaxed of performance criteria. However, the very low price of such systems, and the incremental efficiency improvements that technology advancement has brought, have until now kept traditional solutions as a clear favourite over greener options.

However, the industry is now changing. The emergence of LED as an efficient light source has made it possible for governments to set targets and even ban types of inefficient light bulbs. Proponents of LED lighting argue that a worldwide switch to LED could reduce the energy consumption of lighting by 40%. This equates to approximately EUR 130 billion per year saved in running costs or 670 million tonnes of CO2 emissions avoided – the equivalent output of 640 medium-sized power plants.

Honeywell, which has a heritage in LED dating back 40 years, has recently called for a global switch to LED lighting. It’s a move supported by global independent body, the Lighting Industry Association. According to Peter Hunt, Joint Chief Executive of the association, the pace of change in LED technology has brought not just high efficiency, but also the opportunity to improve the quality of the lit environment, as manufacturers invest in continuous improvement. For facilities managers looking to reduce costs and meet energy targets, the switch to LED lighting is a logical, effective solution.

Europe, as the most aggressive global region when it comes to energy efficiency, is likely to drive the global uptake of LED across the next 10 years and set the example with regards to implementation. However, to date, most organisations – across Europe and the rest of the world – have been slow to investigate the cost- and energy-saving benefits of the technology, often discouraged by widely-discussed myths. Much of the confusion in the market has been caused by many brands selling LED without a strong heritage in the technology, leading to disappointing experiences creating future barriers to entry.

The first of these myths is that LED systems cost too much. All too often in commercial lighting situations, for example building corridors, warehouses and car parks, lighting decisions are based on initial cost rather than longer-term benefits. Initial fixture costs may be higher for some LED lighting solutions than for comparable incandescent and fluorescent lighting solutions. But initial fixture cost does not account for the total cost of owning, operating, and maintaining a lighting system. A LED tube from a reputed company lasts five years longer than the average fluorescent tube, and because of their long life, LED lighting fixtures avoid the maintenance and material costs incurred when changing the exhausted tubes.

Also, with LEDs consuming far less energy, annual power costs can be significantly reduced. The average fluorescent tube generates 58 watts compared to a good quality LED at 23 watts, saving 60% and having a dramatic impact on a building’s energy consumption. In fact, payback on LED lighting solutions can often be realised in less than three years.

The second myth is that LEDs are not bright enough. This was traditionally true, but is simply no longer the case. Traditionally, comparisons between the lumen output of conventional lamps against LED lighting fixtures have been inaccurate and misleading, as they fail to account for the significant amount of wasted light in conventional lighting solutions. When comparing lighting fixtures on the basis of delivered light, LED fixtures often perform as well, and in some cases significantly better than conventional fixtures, while consuming far less energy. Plus, with LEDs being inherently directional, they emit almost all of their light output in the desired direction, rather than dispersing it in all directions.

In fact, LED is a revolutionary lighting technology. It offers greater colour variability, “instant on” capability, dimming capacity, and freedom in design. It also has a much wider optimum temperature span. It can withstand extremely cold conditions – such as those in freezer cases or on the streets of Alaska – as well as operate effectively up to +40°C. In fact, a Honeywell LED operates effectively from +40°C to -20°C. By comparison, a fluorescent tube is limited to a range of+35 °C to +15°C and often struggles at the typically lower ambient conditions found in many applications. A T5 fluorescent, for example, has an optimum temperature of 35°C, making it very limited in its use.

Despite this, technology transitions can create significant uncertainty, and the myths around LED lamps have kept them in the slow lane to adoption, with businesses largely missing out on their great potential.

So, what is the future for LED in a traditionally slow-moving lighting industry? Legislation is critical to the growth of the lighting market across the next 10 years. The high level of natural wealth and population growth drives newly emerging markets in APAC and the rest of the world, but the hard push of legislation in Europe followed by NAFTA is closing the gap. According to McKinsey & Company, LED lighting has the potential to be the dominant technology in domestic and commercial lighting by 2015. The word “potential” is the key here. In order for these potential benefits to be realised, organisations need to be more cognisant of how the benefits outweigh the myths.

The writer is Business Director of Honeywell Electrical Devices and Systems (ED&S). He can be contacted at james.chorlton@honeywell.com