Will serve Kalisindh thermal energy plant to generate up to 1,200 MW power

What are believed to be the world’s tallest cooling towers are nearing completion as part of India’s Kalisindh Thermal Energy plant, Rajasthan, India. According to Linden Comansa, a subsidiary in China, which provides cranes, BGR Energy System specialised in energy plant engineering and construction is in charge of one of India’s most important energy projects. 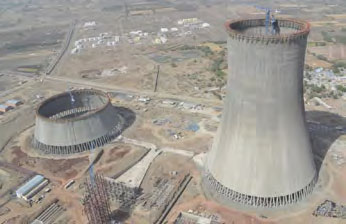 With an initial budget of almost EUR 725 million (around USD 820 million), the Kalisindh Thermal Energy Plant is part of an ambitious plan of the Rajasthan Government, which expects to produce up to 1,200 MW (2 x 600) when the plant is operative, Linden Comansa reveals. At 202 metres, the two cooling towers are believed to be the world’s highest – taller than Niederaussem in Germany, it adds.

For the construction of the two cooling towers, BGR Energy Systems is using two 21CJ290 tower cranes from Comansa Jie, with maximum load capacity of 18 tonnes. Both have jib length of 74 m, the maximum of this model, which allows them to reach the tower’s base diameter, of 142 m. Both cranes have reportedly been jacked-up with a hydraulic cage in different phases, until they reached 217 m of height, Linden Comansa said. The construction of the first cooling tower reportedly ended in June 2012.