by CCME Content Team
Share on FacebookShare on Twitter
The Ecological Footprint Initiative was launched in 2007 through a partnership between the Ministry of Environment and Water, Environment Agency, Abu Dhabi, EWS-WWF and the Global Footprint Network

From 2007 to 2011, the Ecological Footprint Initiative succeeded in verifying the UAE footprint, identifying the breakdown of the footprint by sector and developed a scientific scenario-modelling tool for decision makers that assesses the impact of different policies to reduce the country’s footprint by 2030.

In 2012, the partnership welcomed the Emirates Authority for Standardisation and Metrology. The Ecological Footprint Initiative is now continuing to verify the UAE’s footprint, developing an energy efficiency standard for domestic lighting and conducting a socio-economic analysis to prioritise policies that will help manage both the demand and supply of energy and desalinated water. 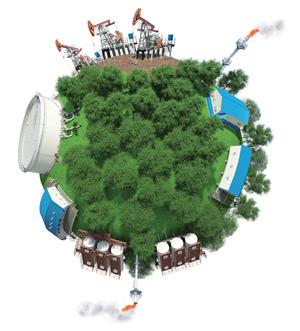 The Ecological Footprint tracks humanity’s demands on the biosphere by comparing humanity’s consumption against the Earth’s regenerative capacity, or biocapacity. It does this by calculating the area required to produce the resources people consume, the area occupied by infrastructure, and the area of forest required for sequestering CO2 not absorbed by the ocean. The report highlights that it takes 1.5 years for the Earth to regenerate the renewable resources that people use, and absorb to CO2 waste they produce, in that same year. The average global per capita footprint is about 2.7 global hectares; Qatar, Kuwait and the UAE have some of the highest per capita Ecological Footprints at 11.68, 9.72, and 8.44, followed by Denmark at 8.25 and the USA at 7.19.

The summary – a journey towards a lower footprint

The United Arab Emirates is a rapidly developing country which has experienced a long period of extraordinary economic growth, resulting in an increasing rate of consumption of natural resources.

As a hot and dry country, the UAE requires energy for cooling and for desalination of domestic water supplies. Combined with this is the inefficient consumption of natural resources. These factors have resulted in a high per capita Ecological Footprint (Footprint) for the UAE, which is currently the third highest in the world at 8.4 global hectares (gha) per person. About 80% of this footprint is due to the consumption of carbon-intensive goods and services and, in particular, energy.

In 2007, the UAE launched the Ecological Footprint Initiative to address its high per capita Footprint, and in doing so, became the third country in the world after Japan and Switzerland to embark on in-depth research to understand and manage its Footprint. The initiative was set up through a unique public, private and civil society partnership between the Ministry of Environment and Water; the Environment Agency, Abu Dhabi; Emirates Wildlife Society in association with WWF (EWS-WWF); and the Global Footprint Network, and more recently with the Emirates Authority for Standardisation and Metrology.

By working to understand the UAE’s natural resource consumption patterns, the partners have helped catalyse change in both societal awareness and policy development: in its first two years, the initiative verified the UAE’s Ecological Footprint data and identified the contribution of different sectors to the country’s footprint. It discovered that households in the UAE are responsible for 57% of the country’s consumption, followed by business and industry contributing 30% and the government sector contributing 12%. As a result, the need to empower society to play an active role in reducing the country’s Ecological Footprint was highlighted.

To help address this issue among the UAE community, EWS-WWF launched its Heroes of the UAE awareness campaign in partnership with the Environment Agency, Abu Dhabi.

In 2010, the initiative outlined how a set of different policies are needed to help address consumption issues related to energy and water. By focusing on the supply and demand of energy and water, the analysis showed that by the year 2030, measures such as more ambitious renewable energy targets, stronger building codes and energy efficiency standards for appliances, could help reduce CO2 emissions for the emirate of Abu Dhabi by up to 40% and the UAE’s per capita Footprint by 1 gha/person. This scenario modelling demonstrated the clear need for any footprint mitigation strategy to include a portfolio of policy measures as the cumulative impact is much greater than individual policies.

By strengthening and continuing such science-based analysis, the initiative can help decision makers implement policies and strategies to mitigate the impacts of rapid development.

The second phase of the initiative began in 2012 and follows a three track process:

The experiences and vital knowledge gained from the Ecological Footprint Initiative have benefited the country by creating opportunities for UAE government leaders and residents to move towards increasingly sustainable development. Initiatives that actively encourage sustainable development, and most importantly, facilitate collaboration between the public, private and civil society sectors, bringing everyone’s efforts together, are essential to catalyse the change needed for the UAE, the region and the world to make the transition towards a sustainable future within our one planet limit.