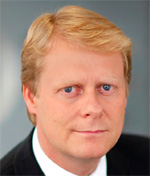 Siemens has appointed Kay Zwingenberger as the new CEO for the company’s operations in the UAE. Announcing this, Siemens revealed that Zwingenberger first joined the company in 1992 and gained management experience throughout Europe, spearheading the development of the Siemens Healthcare sector in Ukraine and heading the Healthcare sector for the company in Russia. During his three-year tenure in Russia, the company’s business volume trebled on the back of several large-scale contract wins, Siemens claimed.

According to the company, he was subsequently appointed CEO for Central Asia with responsibility for Kazakhstan, Kyrgyzstan, Tajikistan, Uzbekistan and Turkmenistan. Based in Almaty, Kazakhstan, he oversaw the company’s continuous growth against difficult economic conditions in the region. He will continue to build on the company’s global strategy of innovation, knowledge transfer and investment in emerging markets, the announcement added.

“The UAE is a thriving, rapidly developing nation, and Siemens is committed to strengthening further its engagement in realising the country’s ongoing economic diversification, creating job opportunities for young Emiratis, and supporting the transfer of know-how and technology,” Zwingenberger said.

Commenting on the appointment, Erich Kaeser, CEO of Siemens Middle East, said: “Kay Zwingenberger brings with him two decades of experience of working with Siemens and has a proven track record of growing the company’s business.”