Various presentations were made at the Eurammon symposium, held on June 22 in Schaffhausen, Switzerland, entitled “Natural Refrigerants – Growing strong, acting smart, moving forward”. Announcing this, Eurammon, a joint European initiative of companies, institutions and individuals who advocate an increased use of natural refrigerants, said that the presentations delineated on the current developments and attractive possible uses of natural refrigerants in refrigerating systems.

During the symposium, among others, nine speakers reported on successful examples of practical use, novel possible applications and current developments and trends with natural refrigerants, also outside Europe, and the focus of the event concentrated on the refrigeration of food, particularly in supermarkets.

Speaking during the event, Mark Bulmer, member of the Eurammon board, explained: “When it comes to food production and food retailing, reliable refrigeration of goods is indispensable. In supermarkets alone, refrigeration systems account for 45% of the energy costs. This is why energy consumption and efficiency are increasingly the focus of discussions about refrigeration and air conditioning systems, in addition to the environmental compatibility of refrigerants. For Eurammon, it is particularly important to illustrate how solutions with natural refrigerants can be both environmentally friendly and energy efficient.”

In this context, Raymond Burri from Walter Wettstein AG presented an example of combined refrigeration and heat production for a food producer, Eurammon said. Together with a new refrigeration system, the factory is also equipped with a heat pump that uses the waste heat from the refrigeration and air conditioning process, said Burri. “Both systems operate with ammonia as refrigerant. The new system not only saves the customer energy costs, but also reduces his carbon footprint by around 47% compared to the old system,” he added.

The presentations on supermarket refrigeration triggered lively discussion and an active sharing of experience among both speakers and audience. For instance, Janos Winter from QPlan, Hungary, advocated the use of NH3/CO2 cascade systems, while Josef Riha from thermofin came out in favour of the increased use of propane, given its similarly good thermodynamic properties and its suitability for use in various temperature zones.

Highlighting that the discussion was illustrative of the fact that the current applications for using natural refrigerants was varied, Bulmer is said to have remarked: “There is no one perfect solution. Instead, it depends on the combination of various factors, which also affect the choice of refrigerant.”

The natural refrigerant horizon was, then, extended beyond the European borders to the GCC States by B Surendar, Editor of Climate Control Middle East magazine, based in Dubai, together with Carlos de Ceballos from the Spanish firm, Apina. Surendar provided information about the developments and use of natural refrigerants in the GCC States and drew attention to the future application and development possibilities for natural refrigerants, particularly in the food sector, in district cooling systems and turbine inlet air cooling (TIAC) in power stations.

In the context of the huge energy demand of the Gulf States, Carlos de Ceballos spoke about TIAC applications in power stations using the natural refrigerant, ammonia, and highlighted the specific challenges facing both refrigeration professionals, such as planners and plant engineers, and power stations as new users of refrigeration systems.

Enthused by thea positive response, Eurammon informed that it had plans to hold a further symposium in Schaffhausen next year, and added that the lectures given at the event could be downloaded from its website www.eurammon.com.

Snapshots of the Event 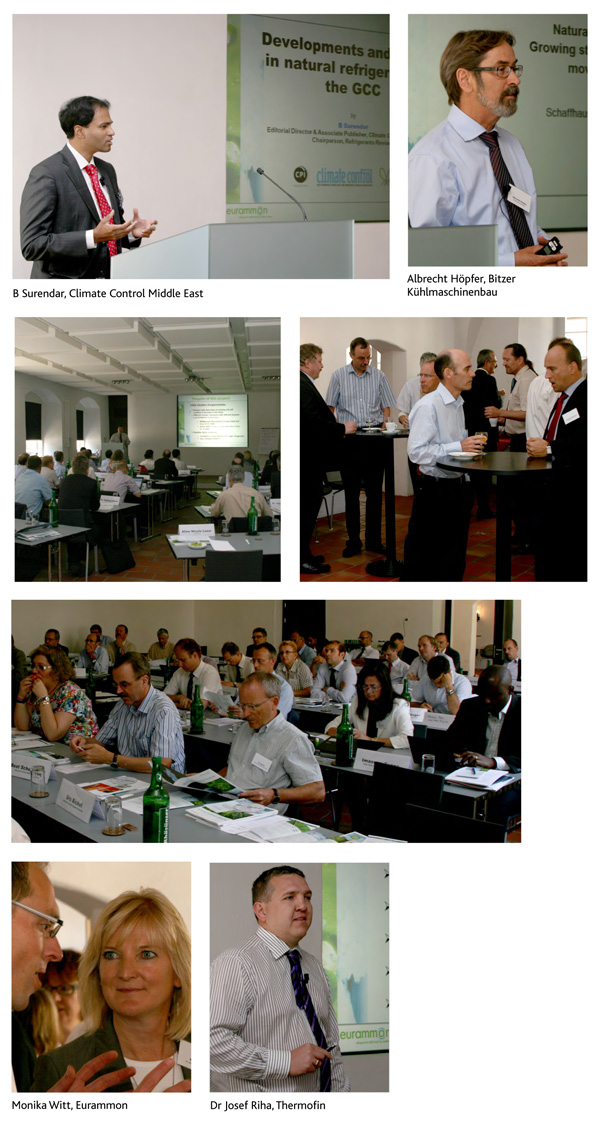