A time to introspect … and act

Around 700 million people in 43 countries suffer from water scarcity. The alarming situation is closer home than we think. Awareness campaigns to educate people about water savings is not enough. The assessment system is not enough. We need regulations and we need to enforce them. Aggressive policies need to be implemented. And when it comes to district cooling, an integrated approach, taking into account cost-effective technologies and environmental impact mitigation is the need of the hour. These were the points hammered home during The Climate Control Conference (C3) Doha on April 10 and 11.

“Very soon, we will see a desalination plant every 200 kilometres in the GCC region,” said a participant, adding, “every year, we are going to increase the salinity of water. So, it is time to take stock of water.” Literally. And take stock the participants and delegates did. Held against the backdrop of water shortage in the world, across the region and Qatar, where the event took place, The Climate Control Conference with its avowed theme: “Optimising water use in district cooling, exploring macro-directions”, squarely faced up to a few pertinent questions:

The two-day conference, which saw technical presentations and panel discussions, with a spotlight on challenges and recent advancements in cooling towers, endeavoured to answer a host of questions by examining the various technologies and options, and listened to the received wisdom offered by the experts in the industry.

With the tagline: “This time around, we are talking water!” C3 Doha had the avowed mission of some soul-searching. The tagline and the theme reflected the subtext – water is going to be a scarce commodity in Qatar and something needs to be done, and soon. According to estimates, water demand in Qatar will go up from 1.1 million m3/day in 2011 to 2.1 million m3/day in 2020. A large part of this increase is attributed to the needs of a growing population. Currently, the country depends largely on seawater desalination. But it evidently comes with a fine print – endangering the marine ecosystem.

The various presentations and panel discussions addressed these and related topics and came out with pertinent observations and recommendations. Fadhel Al Kazema, Tekneen Utilities, Kuwait clubbed the twin issues water and district cooling under discussion and hit the nail on its head when he said: “There is need to lower domestic oil consumption. You might reach a stage when there is no oil to export. And district cooling can help in reducing power consumption, which is generated through burning fossil fuels.” It was, indeed, time to face up to the water situation in Qatar and the region, especially in relation to district cooling. The recommendations and observations of the delegates and participants painted a stark picture of the ground reality. It was also a wakeup call: The time for procrastination is over. It is time to act.

More than ethics, the issue really is with the subsidising of water and power, which is affecting the habits and cultural view of water resources, in general. Unless we take efforts to find where the leakages are and fix them, we will not achieve what we want.

Antoine Stephan, Hamon CTC was of the opinion that:

There is no data on losses or damages on cooling towers, because it really is a case-by-case basis, depending on the application and depending on the age. Of course, you have to go by CTI recommendations and ensure proper servicing of electro-mechanical equipment. It is important to check on the fill, empty spaces, etc. If you ensure proper maintenance, you can easily reach a life expectancy of 25 years. You have to monitor the operations, and that is according to the first design conditions we have.

There is need to:

Hassan Sultan, President of ASHRAE Oryx Chapter and the Director of Mechanical Department, MZ & Partners (Architectural and Engineering Consultancy), made the following observations: 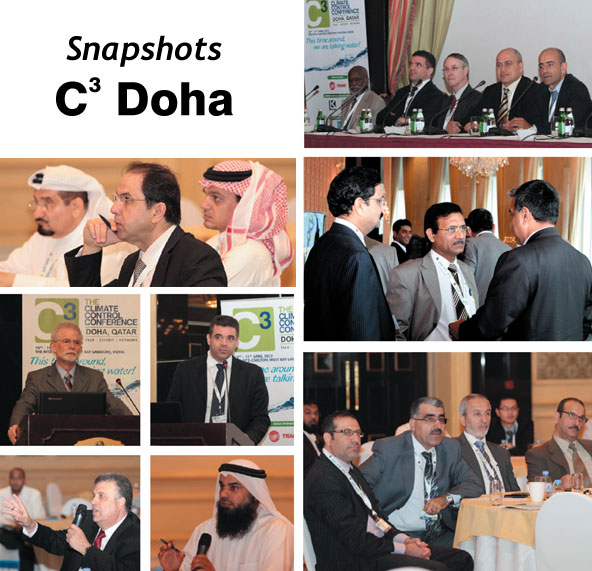