Touting that it is a fog system able to combine the reliability of Italian technology at a sale price lower than that of Asian products present on the market, Idrobase Group has introduced Kit Fog 40 – 360°. The manufacturer claims that the patented solution is particularly effective for cooling, humidifying, creating special stage effects, suppressing dust and odours in small-medium places, such as bars and restaurants, but ideal for open areas too, with the additional value of keeping away mosquitoes and flies.

Highlighting that Kit Fog 40 – 360° is versatile and comes with a variety of accessories, Idrobase explains the finer points of how the technology works: A cooling system using nebulised water, (in particular used by Asian manufacturers), consists in mounting on the classic fans a series of nozzles that nebulise water at pressures varying from three to 70 bar, depending on the manufacturer. The whiff of air from the fans pushes micro-droplets into the environment to be cooled. The greatest benefit as regards reduction of temperature is found close to the fans, but the closer you get to them, the more the air is saturated with moisture produced by water coming out of the nozzles, and consequently the deposit of humidity increases on people and surrounding objects until they get wet. Idrobase cooling system, on the contrary, uses a fan, placed at a height of 2.5 metres and blows the air at 360°, which is full of microscopic water droplets forming a sort of cloud. Water nebulised through a ring of nozzles, while it falls down, evaporates without wetting people and objects and lowers the temperature in the surrounding area.

Idrobase adds that five models of Kit Fog 40 – 360° are available with or without remote control, with a flow rate varying from 30 to 200 litres per hour for a maximum of 100 nozzles. The Pressure is 40 bar, power is 300 W and the weight is only 20 kilogrammes, it claims. 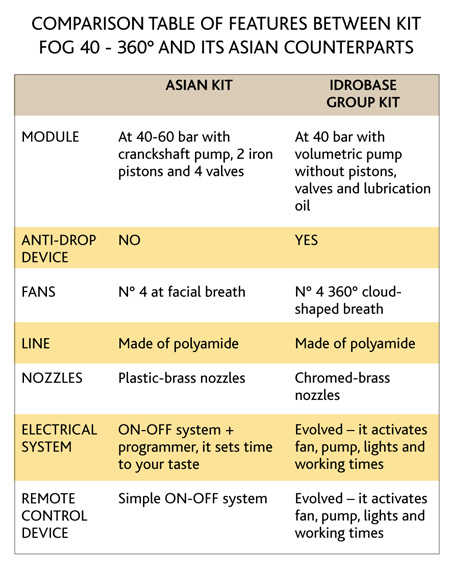