Royal Philips Electronics has appointed Roy Jakobs as its new President and Chief Executive Officer, effective from the first quarter of 2012, to lead the company in the Middle East and Turkey (ME&T) areas. 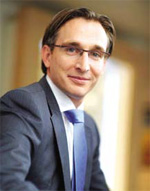 According to Philips, Jakobs first joined the company in 2010, based in Eindhoven, The Netherlands, as Lighting’s Chief Marketing Officer, a role in which he held responsibility for global marketing of lighting solutions, with the role focusing especially on LED Lighting and capturing the opportunities of the lighting industry transformation. Prior to Philips, Jakobs has worked across several different industries, such as oil, media and publishing in various executive roles globally.

“With Philips’ expertise and innovations, we want to support the governments and private sectors in tackling the different regional challenges,” Jakobs said. “When it comes to healthcare, we want to make sure that we help improve patient outcomes while lowering the burden on the healthcare system.”