Jotun Paints has revealed that its participation in Qatar Projects 2012, held from February 5 to 8, at the Grand Hyatt Hotel in Doha, Qatar, was part of its continuing move to strengthen its market presence across Qatar’s rapidly growing paint segment, which has been estimated to be worth over QAR 300 million. To date, Jotun has also reported a total of over QAR 150 million-worth of projects that have either been completed, ongoing or are currently in the pipeline. 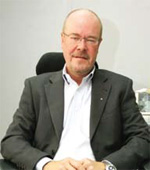 According to Jotun, the key drivers for the paint segment’s upward movement include cost/pricing, LEED/green and QSAS-compliance and international specification and product quality. The strong construction boom prompted by the preparations for Qatar’s hosting of the 2022 FIFA World Cup has also spurred a large demand for paint and coatings like intumescent coating, floor coating, powder coating, decorative coating, marine and protective coating, Jotun said, and added that market reports have also revealed a strong preference for products that adhere to ‘green’ standards.

“Qatar continues to be a very important market for us, where we confidently see the potential of continuous growth, which is being driven by the influx of construction projects in preparation for FIFA World Cup in 2022,” said Gunnar Eikebu, Country Manager, Jotun Paints, Qatar.