Hamdan Bin Mohammed e-University (HBMeU), in what it said was in line with its commitment to fostering a culture of quality and honouring creativity and excellence, announced hosting the Pan-Arab Media Quality Award 2011/2012. Running under the theme, “Alleviating the negative impact of the global recession on our society: What role can quality play? How will it boost economic activity and provide hope for the future?”, the fifth edition of the award reportedly reflected HBMeU’s belief in the importance of quality in promoting competitiveness and boosting overall development in the Middle East. 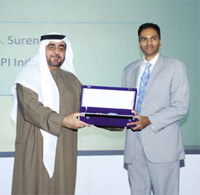 According to the university, the award is aimed at all media professionals in the Arab world and covered the four categories of print, TV, radio and digital media in both Arabic and English formats.

The list of this year’s winners is as follows: Heba Abd El Hamed from Alam Rakamy Website, Egypt, in the Digital Media category; Siham Chafai from Al Fujairah Radio in the Radio category; Ahmad Qasem from Decision Makers in the TV category; and B Surendar from Climate Control Middle East (CPI Industry); and MA Cleofe Maceda from Gulf News in the Print category.

On the occasion, Dr Mansoor Al Awar, Chancellor of HBMeU, said: “Over the past few years, the Pan-Arab Media Quality Award has proven its success, both as a leading platform for spreading a culture of quality and excellence on a large scale across the Arab media. Total Quality Management has gained increasing attention, especially given the recent economic challenges around the world. It plays an effective role in the success of development strategies and in the attainment of tangible and positive results in various economic, social, environmental and scientific areas.”

Serine El Salhat, General Coordinator, Pan-Arab Media Quality Award, HBMeU, added: “The Award is regarded as one of the leading initiatives to enhance awareness on quality in journalism and the media industry, and create an integrated media environment based on innovation, creativity and transparency. This initiative underlines the University’s commitment to raising further awareness among all segments of Arab media on the importance of establishing comprehensive quality management.”