The Bonduelle Group, suppliers of canned vegetables, deep-frozen vegetables, and processed salads, has modernised and expanded the cold-storage facilities at its location in Estrées, close to Péronne, France, and has awarded the contract for upgrading the old plant, as well as for the new high-bay storage facility to GEA Refrigeration Technologies, said a communiqué from GEA.

Giving details of the contract, the communiqué said that in the refrigeration plant of the existing Bonduelle facilities, the company has replaced the previous refrigerant R22 (known for its great ozone depletion potential) with the natural alternative, ammonia (R717). At the same time, Bonduelle has constructed a new 35-metre high cold-storage facility that offers around 24,000 pallet storage slots equipped with advanced refrigeration technology. Bonduelle has awarded GEA Refrigeration France with the refrigeration contracts, with the total value amounting to almost two million Euros. 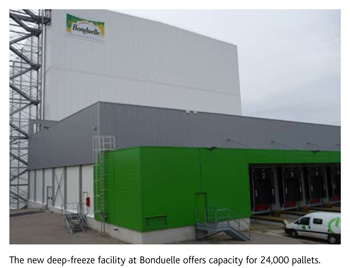 According to GEA, it was possible to achieve energy savings with the existing refrigeration plant alone at Bonduelle, because, as part of the replacement of R22 with ammonia, it not only converted the refrigeration systems during uninterrupted operation, but also equipped the old air coolers with frequency inverters. Consequently, the speed of the fans on the cooling units is now controlled according to actual cooling requirements, with the new measures resulting in efficiency improvement of around 25%, GEA claimed.

Explaining the refrigeration technology it implemented for the new, fully automatic high-bay cold-storage facilities, GEA reportedly had even better efficiency gains. With its capacity of 24,000 storage slots, the pallet facility operates with cooling duty of a mere 2,100 kW – provided by two screw type GEA YR-Y2655S-28 ammonia refrigeration units that provide temperatures of –28°C, GEA claimed. These units support five GEA Goedhardt air coolers from the segment GEA Heat Exchangers, it revealed, and explained that the air coolers, designed to stimulate the thermo-syphon effect, blow cold air coming from the ceiling downwards and assure effective penetration of the cold-storage unit, with a volume of about 150,000 m³. 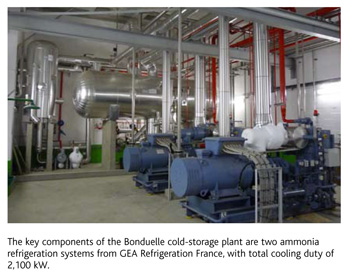 According to GEA, the especially dedicated air-flow system induces a “refrigeration lake”, which ensures that the plant reliably maintains the required storage temperature of –20°C. It pointed out that it was essential to provide air movement with minimal flow speed, while preventing hotspots. The implemented solution assures the required temperature with an air-outlet temperature of only –25°C, it said, and added that frequency inverters on the fans and speed-controlled screw compressors ensured demand-driven operations and great efficiency in partial-load operating zones. 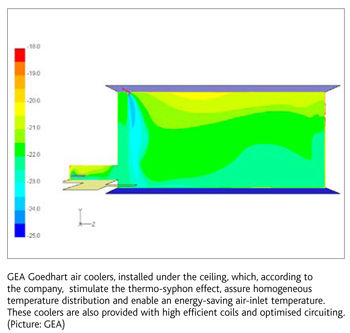