The onus is on the people

by CCME Content Team
Share on FacebookShare on Twitter
Opportunities exist for a vaster spread of district cooling and cogeneration in Saudi Arabia, but the responsibility lies with the people, and therein lies a solution to the power challenges the Kingdom faces.

Opportunities exist for a vaster spread of district cooling and cogeneration in Saudi Arabia, but the responsibility lies with the people, and therein lies a solution to the power challenges the Kingdom faces. Story: B Surendar

Delegates and participants alike at The Climate Control Conference (C3) agreed that district cooling and cogeneration could play a significant role in alleviating the power scenario in the Kingdom of Saudi Arabia.

The Conference, on October 16 and 17 in the Saudi coastal city of Al Khobar, had as its theme, ‘Power Security Through District Cooling and Cogeneration’. Organised and conducted by Climate Control Middle East, the fourth edition of the Conference saw participants and delegates from across the Kingdom, including Saudi Tabreed, Saudi Aramco and the Royal Commission of Jubail and Yanbu, to name a few.

The theme of the Conference was in acknowledgement of the power challenges facing the Kingdom. It has been widely reported that of the approximately 11 million barrels of oil the country produces in a day, approximately three million barrels are used for domestic consumption, a lion’s share of which is for generating power. Even more alarming is the fact that the volume of oil needed for domestic consumption is increasing by eight per cent a year, which if not addressed with vigour, can lead to consequences for the country’s GDP. The Kingdom is turning to renewable sources of energy, with solar firmly in the radar. In view of this, district cooling industry insiders do feel that a vaster spread of centralised cooling and cogeneration can together be a robust ally.

At the Conference, structured as a series of roundtables and a cluster discussion, which involved all the members of the audience, industry insiders explored the role of district cooling and cogeneration systems further. In particular, participants in the roundtable sessions discussed the following topics:

• Should we opt for centrifugal or absorption chillers in a bid to create a cogen regimen? How should we make use of power plants to recover waste heat in power generation?

• What is the impact of doing the either (centrifugal or absorption) on capex, IRR and maintenance?

• If absorption is the way forward, should we opt for double-effect or single-effect?

• Similarly, how many kilowatts can you generate from a steam turbine to feed a centrifugal chiller?

• Can we zero in on a formula to establish a relationship between power generation and cooling capacity in centrifugal chillers?

• In the case of rental solutions, is it possible to develop a mobile heat-recovery system?

Speaking of the feasibility of implementing a district cooling regimen, the participants in the roundtable said that the GCC had the wherewithal to build the best possible plants and infrastructure. Pointing to the fact that the GCC had an installed capacity of approximately 3.5 million TR of district cooling, when compared to the US, with an installed capacity of approximately 750,000 TR, they said that the region was constantly developing technology, application and knowhow.

Speaking of cogeneration, the participants said that, contrary to popular belief, cogeneration was happening in several parts of Saudi Arabia, and that micro-turbines in the country were a reality.

Cogeneration made sense, they said, considering the losses experienced in the country during generation and during transmission and distribution. Substation losses in Saudi Arabia were in the region of 10%, where T&D losses came to about 15%. Against this backdrop, they said, cogeneration was much more feasible and appealing than a combined cycle regimen.

In the course of the roundtable discussions, the participants said that it made sense to think of distributed energy and cogeneration in KSA in order to reduce waste. They asked: “Why don’t we develop a network of thermal fuel distribution? Why is this not a utility? There is the example of going from air cooled to water cooled and saving 50%, so why don’t we take the Jubail seawater lesson across the country?”

The participants said that electricity subsidy remained a barrier to district cooling and cogeneration. Fifteen years ago, it was 15 halalas/kwh, they said. Today, it came to five halalas/kwh, which surely was not a normal pricing policy. The Saudi Electricity Company received oil at two US dollars a barrel, whereas it was in the region of $100 a barrel. Subsidy and oversizing, they said, were two bad words in the region. The objection to cogeneration and district cooling, they said, was the slab rate system and also subsidised power. Subsidies, they agreed, were not tenable, considering the substantial shortage of electricity.

Speaking further on the opportunity or cogeneration, the participants said that a litre of diesel cost AED 2.5, whereas in Saudi Arabia, it cost 24.5 halalas. The cheap diesel in Saudi Arabia meant more opportunities existed to generate electricity. Ultimately, the participants said, people who wanted to build the country had to take responsibility. 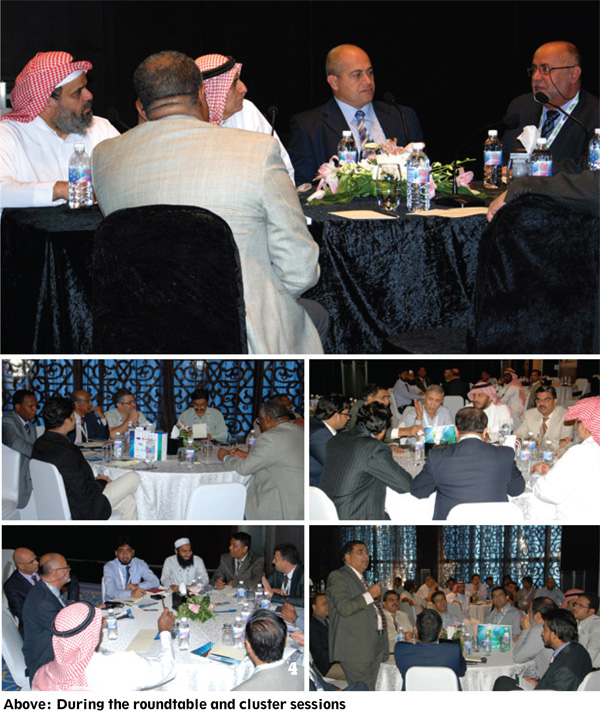