What’s in the air

by CCME Content Team
Share on FacebookShare on Twitter
Eurovent Market Intelligence (EMI) has recently published the results of a study on EMEA 2010 sales. We bring you the highlights.

Eurovent Market Intelligence (EMI) has recently published the results of a study on EMEA 2010 sales. We bring you the highlights.

Eurovent Market Intelligence (EMI), the European bureau of statistics for the HVACR market, has released a report based on the results of a study on EMEA 2010 sales, gleaned from the data gathered among industry manufacturers. From the trend, it can be discerned that Middle East dominates the global rooftop units market.

On the whole, it can be said that 2010 was a year of recovery for the entire HVACR industry, and the trend seems to be continuing in 2011.

The chiller market in the EMEA area rose to 16 million kW in 2010, representing a 10% increase over 2009. In the small capacity category (< 50 kW), sales were largely concentrated in Southern Europe: France, Italy and Spain accounted for nearly two-thirds of the sales.

France and Turkey accounted for roughly 27% of the kilowatts sold in Europe in 2010, followed by Benelux, Germany, Italy and England, which exceeded 10% of the market share each.

The forecasts for 2011 are generally encouraging, with predicted growth figures ranging from 11% to 17% for Eastern Europe, between five per cent and 12% for the rest of Europe, and 11% for Africa. Due to the current economic crisis, Greece is expected to report negative sales for 2011.

The air handling unit market amounted to more than 1.5 billion Euros in 2010 in the EMEA area. The main countries for this market were in north east Europe: Germany accounted for about one-quarter of the European market and Scandinavia represented 17%, while England and Russia reported eight per cent sales each. The Middle East accounted for less than 10% of the EMEA market.

This market was dominated primarily by rooftop units that do not necessarily require the installation of air-handing units.

According to the study, the countries that were significantly hit by the crisis, such as the Scandinavian countries, experienced a very slight recovery of around four per cent, except for Norway, where growth reached 19%. This trend is expected to decrease in 2011.

The forecasts for 2011 appear to be rather optimistic, with increases between five and seven per cent, and even exceeding 20% for Ukraine and the former Soviet Union countries.

The number of fan coil units sold in 2010 rose to roughly one million in the EMEA area. European sales represented about 75% of the market. Italy accounted for approximately one-third of the market (13%), followed by the Iberian Peninsula (9%), Turkey and the United Kingdom, which registered five per cent sales each. The Middle East accounted for 20% of the total sales.

More than three quarters of sales were represented by the two-pipe categories, while the remaining quarter of the units sold consisted of four-pipe models.

The report claims that, as in 2010, sales in 2011 are not expected to report major growth, except in Turkey, which will record a two-digit rise in sales. Other countries – particularly Russia and Portugal – are expected to remain stagnant.

Out of around 60,000 units sold in 2010, the Middle East confirmed its EMEA market leadership position, accounting for nearly two thirds of the units sold. It was followed by Africa, with almost 10% of sales. The main European consumers were located in the Iberian Peninsula (18%) France (17%), Italy (14%) and the United Kingdom (14%), which together consumed most of the rooftop equipment sold in Europe.

In the Middle East, as in the other European countries, the most frequently sold rooftop units were those with a capacity ranging from 29 to 72 kW. On the other hand, the Middle East’s smaller capacities segment (up to 29 kW) reported sales of more than 10,000 units against barely 2,000 in Europe.

Europe experienced high demand for “reversible” units, while in the Middle East, nearly all of the sales involved “cooling only” units, due to climatic conditions.

In 2011, the Middle East and Africa are expected to report a steady growth at around 25%.

On the whole, 2011 is expected to be a good year for the rooftop unit market, with a projected double-digit growth.

Cooling towers – Germany and the Middle East surge ahead

Estimated at €231 million in 2010, the cooling tower market was split into two geographical areas − Germany and the Middle East − followed by France and Italy, with a market approaching €40 million.

As for the type of technology was concerned, the “open wet” cooling towers were the most common types sold, accounting for half of the total sales.

The report suggests that Germany will maintain its leading position with a growth of 6.8%, while in the Middle East, growth will only reach 4.1%. Portugal and the Nordic countries (Denmark, Finland, Norway and Sweden) will register a decline of around four per cent. 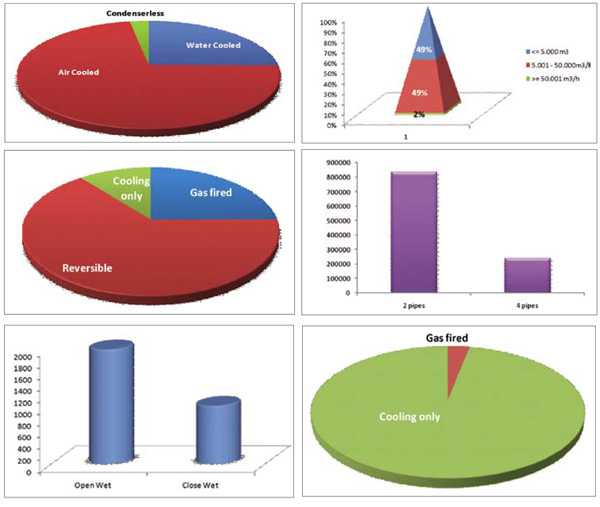