As supply and demand factors increasingly point to a future in which natural gas plays a greater role in the global energy mix, the International Energy Agency (IEA) released a special report exploring the potential for a “golden age” of gas. The new report, part of the World Energy Outlook (WEO) 2011 series, examines the key factors that could result in a more prominent role for natural gas in the global energy mix, and the implications for other fuels, energy security and climate change.

The report, titled ‘Are We Entering a Golden Age of Gas?’, presents a scenario in which global use of gas rises by more than 50% from 2010 levels and accounts for more than a quarter of global energy demand by 2035. However, the report also strikes a cautious note on the climate benefits of such an expansion, noting that an increased share of gas in the global energy mix is far from enough in its own to put the world on a carbon emissions path consistent with a global temperature rise of no more than 2°C.

Speaking at the launch of the report in London, IEA Executive Director, Nobuo Tanaka, said: “We have seen remarkable developments in natural gas markets in recent months. There is a strong potential for gas to take on a larger role, but also for the global gas market to become more diversified and therefore improve energy security.”

“While natural gas is the ‘cleanest’ fossil fuel, it is still a fossil fuel. Its increased use could muscle out low-carbon fuels, such as renewables and nuclear – particularly in the wake of the incident at Fukushima and the likelihood of a reduced role for nuclear in some countries. An expansion of gas use alone is no panacea for climate change.” 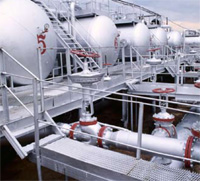 Recent developments have created considerable opportunities for greater future use of natural gas globally, depending on the interaction between economic and environmental factors and policy interventions in the market. This report presents an illustrative “high gas scenario” – the Golden Age of Gas Scenario – which incorporates a combination of new factors that could support a more positive future outlook for gas. These include ample availability of gas (much of it unconventional), which lowers average gas prices, implementation by China of an ambitious policy for gas use, lower growth of nuclear power and more use of natural gas in road transport.

In the scenario, China’s natural gas demand alone rises from about the level of Germany in 2010 to match that of the entire EU in 2035. To meet the growth in demand, by 2035 annual gas production must increase by 1.8tcm, about three times the current production of Russia. Conventional natural gas will continue to make up the greater part of global production, but unconventional gas becomes increasingly important, meeting more than 40% of the increase in demand.

Global natural gas resources are vast, widely dispersed geographically and can help improve energy security. All major geographical regions have recoverable natural gas resources equal to at least 75 years of current consumption. However, timely and successful development of these resources depends on a complex set of factors, including government policy choices, technological capability and market conditions.

Unconventional gas resources are now estimated to be as large as conventional resources, but their production outlook is uncertain as the use of hydraulic fracturing to produce unconventional gas has raised environmental concerns and tested existing regulatory regimes. Adhering to best practices in production can mitigate potential environmental risks, such as excessive water use, contamination and disposal. Based on available data, the report estimates that shale gas, produced to proper standards of environmental responsibility, has 3.5% higher “well-to-burner” emissions than conventional gas.

Natural gas is a particularly attractive fuel for countries and regions that are urbanising and seeking to satisfy rapid growth in energy demand, such as China, India and the Middle East. These countries and regions will largely determine the extent to which natural gas use expands over the next 25 years. When replacing other fossil fuels, natural gas can lead to lower emissions of greenhouse gases and local pollutants. However, the high gas scenario shows carbon emissions consistent with a long-term temperature rise of over 3.5°C. A path towards 2°C would still require a greater shift to low-carbon energy sources, increased energy efficiency and deployment of new technologies, including carbon capture and storage (CCS), which could reduce emissions from gas-fired plants.

Tanaka noted that the report indicates that the future of natural gas seems bright. “If the policy and market drivers of the gas scenario develop as projected, then gas would grow to more than a quarter of global energy demand by 2035,” he said. “Surely that would qualify as a golden age.”