What are the HVACR opportunities in the land of sunny BRIC optimism? Story and photographs: B Surendar

By all appearances, India has got the momentum. Backed by strong domestic demand and an eight per cent growth rate – some would argue it is closer to seven – the country is on the upsurge and is bursting with the sunny BRIC optimism that is so the envy of most parts of the globe.

This clearly reflects on the HVACR industry in the country, which many estimate, is growing at 25%. Nowhere was this more in evidence that at the 2011 edition of ACREX, the largest HVACR show in the country, where exhibitors and visitors packed a space that was at least five times the size of the HVACR component of the 2010 edition of The Big 5 Show in Dubai. And the visitors to the show, held in New Delhi, were not mere catalogue-pickers but decision makers, with intent and serious enquiries in their mind. 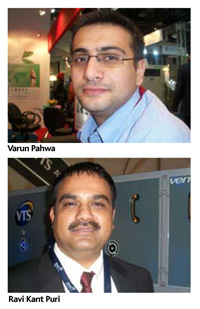 “The HVAC market in India is booming,” says Vikas Tripathi, Head of the Marketing Division (Cooling) at industry heavy weight, Thermax, which among other products, manufactures vapour absorption chillers. “India has withstood the challenge of recession, and it has hardly impacted the growth story.”

Prior to the recession, the focus was on infrastructure. Once the dust and the doubts settled and once people and companies overcame the fear factor, it has been business as usual. If at all anything, the recession changed the composition of projects. In the words of Prabir Kumar Sen, Assistant Vice President (HVAC) at leading MEP contracting company, Sterling & Wilson, earlier, shopping malls drew all the attention, with 10-15 malls in every big city. After the recession, the balance shifted towards the industrial sector. “Today, of the total HVAC business, at least 25% is related to the power or steel sectors. Plus, a lot of automobile companies have been set up in the country. Companies like Tata Motors, Daimler, Fiat, Volkswagen and Skoda. We at Sterling & Wilson have done the HVAC for all these. Automobile giants, like these, have set up large factories, which need large air conditioning and ventilation systems.” Adds Tripathi: “The demand for our vapour absorption chillers is very high from the industrial sector. Almost 80% of the demand is from such industries as pharma, chemicals and refineries.”

Other powerful drivers are the information technology (IT), healthcare, hospitality and cold chain sectors, plus airport renovation and metro railway projects. Ten years ago, the services industry in India constituted 20% of the country’s GDP; today, it is 50%, says Sandeep Dahiya, Senior Manager in the Building Efficiency division of Johnson Controls (JCI). And air conditioning is not a luxury but a necessity in the services industry, he adds. IT and ITES projects are leading a big boom. Says Tripathi, “Large IT complexes and special economic zones (SEZs) have been coming up in the last two to three years.” Adds P K Goel of JCI: “The India story is looking good. SEZs are happening, five star hotels by the dozen are happening. Healthcare is a key area of focus. There is an inadequate supply of hospitals. This is a country where you need people to do something about healthcare, and as a result, healthcare has come into the private industry, and some, like Fortis and Apollo, are taking the initiative to establish a strong infrastructure.”

Navin Valrani, Executive Director, Al Shirawi Group, which distributes ALP’s range of ducting products in the GCC and India, including the ALP Activa Antimicrobial and InSafe technologies to hospital operating theatres, clean rooms, surgical suites and labs, validates Goel’s statement when he says he sees potential in the pharma and hospital sectors in India. “We are doing fairly decent volumes in India, and this year, we anticipate explosive growth. We are looking at 10 installations in India in 2011.” 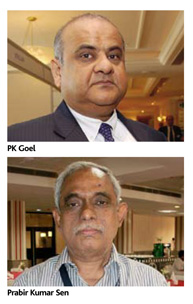 Cold chain is another sector with plenty of potential for growth, especially considering the country has a long way to go to make the system robust and efficient. Varun Pahwa, Executive Vice President at Desiccant Rotors International, which supports the food industry with humidity-control products, bemoans the fact that 40-50% of certain food products are wasted owing to inadequate preservation. In his view, there is a large vacuum that needs to be filled to improve preservation practices – and quickly, especially considering the fact that the food industry has started booming. “There is a lot of scope for refrigeration,” he says. “Cold storage is taking off.”

Adds Sen of Sterling & Wilson: “Cold chain represents a big prospect, but somebody has to look at it in totality. Even now, vegetables get rotten in the farms themselves. If refrigerated, they can even be exported. For instance, more than 10% of the country’s potato harvest gets rotten in the field, owing to the absence of cold store facilities. During the harvest season, we cannot consume all, so there is a surplus. And that’s why we see a fluctuation in prices.

In addition to cold stores, there is a need for improvement in refrigerated transportation, says Vikash Sekhani, Director at Safe A&T Technology. “Transporting refrigerated goods is not just about the equipment, you need good roads,” he says.

Perhaps the only sector that has not fully got back to its feet after the recession-blimp that India went through, is the residential sector. Palpably, the residential sector has been slow in its progress. Despite that, there are signs of prospects for business. A key change, Pahwa says, is a tilt towards luxury villas. The big players, like DLF and Unitech, are addressing this need, and more. In fact, a vast majority of the DLF projects are massive in scale, and cogen is figuring in the discussions, Pahwa says.

The slowness in recovery of the residential sector is only in relative terms. Large project sites are being demarcated, and the billboards are being put up. “It’s the early Dubai days kind of progress,” says Goel, who had a long stint in the HVAC industry in the GCC. “Some of the projects are taking shape – you can see the buildings coming out of the ground. And that’s not only in New Delhi but also in the outskirts of Mumbai and Chennai. And smaller cities have done even better, probably because the land prices in those places are far more controlled compared to the prices in New Delhi and in Mumbai.”

Hand in hand with the real estate developments is the strong awareness on green buildings, and that has opened up opportunities. The green building movement, Pahwa says, has been endorsed by builders in the country. Large LEED-certified projects are coming up across the country, and some, like in Chennai, have even claimed carbon credits.

It’s not just a case of new construction but also existing projects that are getting the LEED attention. The iconic Maurya Sheraton in New Delhi has won a LEED Platinum retrofit project.

Oftentimes, the green building route is taken up more to drive up a brand, some in the industry feel. “I think the jury is out on the issue, but in my view, as far as developers are concerned, LEED is more of a marketing tool than to bring the energy consumption down,” Goel says.

At the same time, there is a concerted endeavour towards energy efficiency. In the eyes of many in the industry, the customer has become very energy-efficiency conscious. The Bureau of Energy Efficiency, which comes under the country’s Ministry of Power, has instituted a star rating system to label all products as environmentally friendly. “There is an aspiration to buy five-star-rated equipment,” Sekhani says. “It is not that people are conscious about the environment, though, but for saving on energy.” Adds Dr Sandeep Garg of the Bureau of Energy Efficiency: “We have a voluntary labelling programme in place, and there is a market transformation taking place. And as more and more people buy the five-star label, it will get pushed up. In 2007-2008, there was no five-star category and more of one-, two- and three-star categories. Today, we are seeing a 12% growth rate in five-star label, which means people are asking for better quality. The impact of the programme is avoided power generation capacity.”

The end-user is not only chasing higher energy-efficiency labels but also is conscious about buying the best products that are available in the market, and this has been a magnet for international players to enter the country. Till two years ago, Pahwa says, the air-side market was predominantly dotted by Indian players. Today, however, he adds, we are getting to see a lot of M&A activity. Today, companies like JCI, Trane, Carrier and McQuay have announced plans to come into the air side market through the M&A route.

VTS is another company that has entered the AHU market in India. The company’s Managing Director, Ravi Kant Puri, is upbeat about business. VTS entered India three years ago as a trading company. In 2010, it acquired a company in India with the intention of manufacturing AHUs in the country, which it commenced this month. “We took this decision to manufacture for faster delivery and better pricing,” Puri says. “You cannot compete if the products are manufactured in Europe.”

Puri says the company has set aggressive targets for growth. Estimating the market size for AHUs in India at 100 million euros ($141.5 million), he adds that VTS would aim to achieve eight to nine million euros ($11.3 million to $12.7 million) of sales in 2011. “Our product has power-saving features, and so we are confident of achieving our target,” he says.

The influx of international AHU brands in the Indian landscape, coupled with the strong green building movement, has had a galvanising effect on established Indian brands to invest more than before on R&D and to deliver innovations. Fedders Lloyd is one such company that is admittedly massively investing in R&D. The company’s Assistant Manager (Sales), Dinesh Munjal, says it has set for itself an $11-million target for the current financial year, and is optimistic of achieving it. “We have introduced AHUs with heat-recovery wheels,” Munjal says. “To serve the pharma industry, we have incorporated a provision for HEPA-filters in our AHU design. And for the hospital sector, we supply AHUs with UV tubes in them.”

The AHUs market is but one among other markets that have witnessed an upswing in business. The India story looks attractive, and there is a feel-good factor about it. If the buzz at ACREX is anything to go by, India presents a wealth of opportunities. At the same time, it poses challenges. While suppliers have arguably never had it so good, the traditional challenges remain. For instance, the payment terms for suppliers are not good. Delayed payments are a reality, Pahwa says, so it is important to securitise payments and not just be enthusiastic about selling products. From a contracting point of view, Sen of Sterling & Wilson describes how owners of smaller shopping malls, for instance, tend to buy the high side on their own. “They only want to sub-contract the ducting,” Sen says, “because they feel a contractor will put a margin on ducts and AHUs and decide to buy on their own.” Adds Goel: “The owner thinks of buying part of the equipment himself, gives it to the contractor and says, ‘Give me a labour rate’. And what the contractor starts as a project is not what he finishes. There are far too many variations and extras, because upfront planning and drawing is not direct. There is a great measure of improvisation.”

Despite all these, the India story is a tantalising one. It is where the action is, and in the right volumes.