Sandstorms – can air filters combat them?

by Dr Iyad Al-Attar
Share on FacebookShare on Twitter
In the third part of the series on air filtration, Iyad Al-Attar follows the microscopic journey of particles during a sandstorm, and asks a few relevant questions. 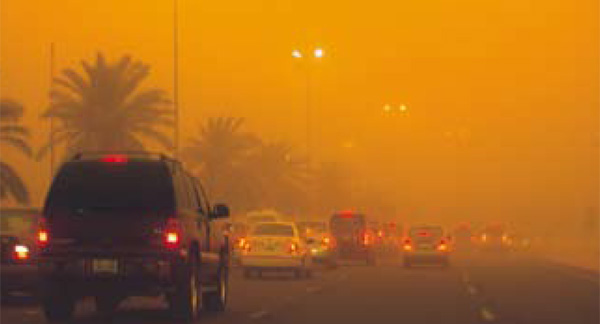 A dust storm or a sandstorm is a meteorological phenomenon caused by strong winds that occur in arid and semi-arid regions. The Sahara is considered to be a major source of such storms. In the region, such as the Arabian Peninsula, sandstorms are frequent, and not a single summer day is free of dust. Sandstorms can impede nearly all our daily activities. Figure 1: a and b (Kuwait City) illustrates the effect sandstorms have on visibility. But the relevant question to be asked in the HAVC sector is, what is the impact of sand storms on HVAC equipment? 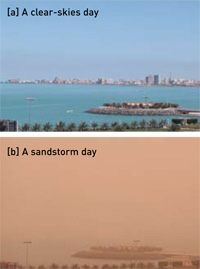 To better understand the effect of sandstorms on the performance of air filters, it is important to highlight the common collection mechanisms at which particles get deposited on the fibre surface.
When the subject of air filtration is addressed, the first misconception that comes to mind is particles being strained between the clearances of two fibres due to its diameter. This mechanism is called “straining” and is not a dominant mechanism in depth filtration.

Complex interactions that occur between Brownian diffusion and inertial effects result in the process called the Most Penetrating Particle Size (MPPS). The MPPS is defined as the particle size at which the filter efficiency is the lowest at a given flow rate. MPPS is only significant when dealing with absolute filters, such as HEPA and ULPA filters. The impaction, interception and diffusion mechanisms are illustrated in Figure 2. 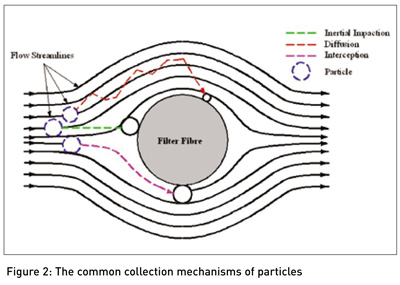 Sandstorms increase the dust concentrations, challenging the filters in the Air Handing Units. Consequently, the life span of the air filter is shortened, which is not cost-effective. Such evaluated concentrations may cause bridging of particles to form dendrite, which is an example of dust cake agglomerates on the filter surface and, consequently, impair it from acting as depth filter, as shown in Figure 3. Surface deposition occurrence on a depth filter prior to the full utilisation of its thickness signifies that the depth filter is acting merely as a surface filter. In other words, the surface pores will strain particles larger than their diameter, as shown in Figure 4. Pre-filters play an important role in allowing fibrous filters to perform as depth filters. In fact, large particles can be easily removed by means of a pre-filter such as, a foam medium [Figure 5], which be regenerated by water wash.

When an air filter starts to collect dust particles, either within its depth and/or at its surface, the filtration behaviour becomes more complex to describe. Dust particles form a so-called dust cake, as they deposit on the filter medium. Subsequently, this layer of dust acts as another layer of filtration. 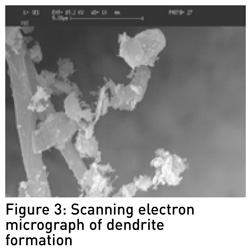 Dust cakes can be formed by a combination of two primary mechanisms – bridging and complete blocking. Bridging takes place when particles smaller than the pore sizes in the filter medium form a cake; this occurs when the particles are at a higher concentration at the feed. On the other hand, complete blocking is a sieving process that occurs when particles are larger than the pore sizes. Figure 6 shows HEPA filter preceded by a fine filter and coarse pre-filter, where, as a result, it is challenged with low-dust concentration, and smaller particle size and depth deposition has taken place. On the other hand, Figure 7 shows similar HEPA challenged with higher dust concentration and larger particles filter in the absence of a fine filter.

Surface deposition on a depth filter does not allow it to utilise its thickness and lower filters permeability drastically, which is inversely proportional with the pressure drop of the filter. In depth filtration, fine dust settles around the fibre and the changes in filter permeability are negligible, at least in the initial loading conditions. Consequently, the pressure drop response will also increase slowly, and the lifetime of the filter gets extended.

To deal with high dust concentrations, the role of pleated filter in the given space is highlighted, which decreases the air medium velocity. The decrease in velocity translates into a longer aerosol’s residence time inside the filtration medium, which increases the probability of the particle-fibre contact. As a result, it leads to an enhancement of diffusional capture efficiency, leading to increased particle loading capacity per unit area, when compared with a flat sheet medium. Pleating filtration medium also enables an increase in the collection efficiency for a given pressure drop, provides higher dust holding capacity and reduces energy consumption.

The above discussion only gives a glimpse of the effect sandstorms can have on the HVAC systems. However, pertinent questions that need to be asked and answered are: How does being exposed to high dust concentration frequently affect our respiratory system? What is the physical and chemical composition of the suspended dust in sandstorms? What design modifications are HVAC designers willing to propose to deal with a high dust concentration climate? And finally, is filtration enough to solely combat sandstorms?

The writer is Regional Director, Middle East, and International Consultant, EMW Filtertechnik, Germany. He can be contacted at iyad.al-attar@emw.de.